The new Andalusian land law, a demanded rule but which raises doubts regarding its development 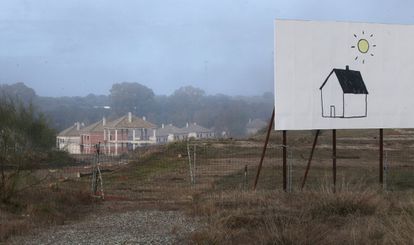 The Malaga municipality of Torremolinos was the last to join the long list of Andalusian City Councils that in the last 19 years have not been able to adapt or develop their urban planning plans (PGOU) to the Andalusian Urban Planning Law (LOUA). The Justice annulled its new planning for lacking the mandatory Strategic Environmental Assessment document. Bureaucratic complexity or the brakes imposed in the courts, when they have been totally or partially annulled or suspended, have slowed their approval for decades. Mayors, real estate developers and owners of irregular homes demanded a regulatory simplification that would speed up procedures. The approval in the Andalusian Parliament of the Andalusian Soil Promotion and Sustainability Law (LISTA) —one of the star projects of the PP and Citizens Government— meets these demands, although it has the frontal opposition of environmentalists who considered retrograde because it eliminates all limits to urban growth, encouraging speculation and limiting access to housing.

“This is the second land law in Andalusia after the LOUA, which was very controversial and took a long time to pass. This has the merit that it has managed to reach a majority agreement and has a vocation for durability, which is important to guarantee stability to investors ”, explains Roberto Galán, professor of Administrative Law at the University of Seville, who, however, warns : “From the point of view of the principles, which include environmental protection or the inclusion of renewable energies, which were not incorporated in the previous one, it is a shareable norm, but it has points, such as the extraordinary uses of rustic land, which if not they control can change the the status quo and suppose a setback in environmental matters “

The LIST unifies the Urban Planning Law and the Land Planning Law, modifies 44 regulations and repeals three laws and three decrees. This is to gain agility and reduce the approval process of a plan, the average of which the Board figures in about 10 years, to a maximum of two years. “The new law will give municipalities autonomy in urban management and will help us with this legislative tangle,” says Maribel Tocón, Deputy Mayor and Town Planning Councilor of Torremolinos, a City Council governed by the PSOE.

Tocón recalls that the LISTA is based on a reform of the LOUA that the previous socialist government began to process as a draft law in 2017, understanding that the legislation in force was out of date, but that it could not approve after losing the Government of the Junta in December 2018. “The LIST takes up the text in process but incorporates substantial changes and, above all, a different, positive and realistic approach on how our urban model should be,” says the preamble to the new law.

Changes in the use of rustic land

In the new urban model of the LIST, the classification of land is reduced to two, urban and rustic, eliminating the category of developable – which was contemplated in the preliminary draft of the PSOE – and in the case of urban it also makes the categories of land disappear. consolidated and unbound. The new cataloging “is consistent with basic state legislation,” says the preamble. “Andalusian law adapts to the correspondence of state law, as other communities such as the Canary Islands have already done,” explains Ignacio Pérez de Vargas, an expert lawyer in urban planning and planning.

The regulation of rustic land has been the main point of friction between the Government and the PSOE. It is only forbidden to build on this type of surface when it is “specially protected”. The LIST allows the construction of isolated houses on rural land, without any type of connection to the economic or agricultural interest of the land, a link demanded by the PSOE. The Minister of Development, Marifran Carazo, considers that this type of remote buildings promote the establishment of the population to the territory in rural Andalusia: “Allowing the construction of isolated houses on rural land is to respond to a real need that favors the development of areas rural areas, it allows to fight against depopulation and avoids the construction of new irregular houses ”, defended the counselor on the eve of the plenary session in which the rule should be voted.

“This regulation provides many facilities to occupy rural land with all types of buildings and allows building legally on undeveloped land, accelerating the use of this type of land with not only environmental costs, but also economic costs that will entail the greatest dispersion of the population ”, warns Juan Antonio Morales, an expert in Urban Planning at Ecologistas en Acción who intervened against the LISTA in the parliamentary commission that debated the norm. Morales also warns about the consequences of the consolidation of the 300,000 irregular homes that were built on rustic land during the validity of the current Andalusian land law. “If with the LOUA that there was containment, this type of housing proliferated, what will not happen now that it is given free rein, there is the possibility that they will double or triple. Deregulation can cause an urban maelstrom especially if illegal homes are shielded, ”he warns. Again, the Ministry appeals to the need to “assume the existing reality.”

“The LIST establishes a new regime for rustic land that is different from the traditional one established in Andalusia,” explains Galán. “If with the extraordinary uses of rustic land they are going to allow tourist megaprojects or exploitations for non-agricultural uses, in the end all the protection on the environment that is incorporated can mean a setback”, he abounds. The teacher recalls that 75% of Andalusian soil is a protected natural area, something that ecologists take into account and warn that any action in that territory will resort.

The LIST also presents developments in terms of planning and opts for a dual system, in line with the socialist draft: a General Municipal Ordinance Plan (the current PGOU), which operates in the medium and long term to determine the general model of the municipality. and in which the supervision by the Board, and an Urban Planning Plan, for the “detailed planning of the existing city” and which grants almost absolute control to the City Councils.

“The sectorial reports will also be easier to obtain because they will have to pronounce on fewer aspects”, indicates the councilor for Urbanism of Torremolinos, who refers to the simplification in the processing of urban projects, which will no longer have to depend on previous evaluations of the ministries involved In the rule there is an express recognition that in urban planning, the competence corresponds to the City Council, which not only plans but also approves, when before that approval corresponded to the Board. “The controls are not eliminated, but they change. They are made previously by the Board, which can issue a binding report before its approval, but the City Council is competent to approve it, ”says Galán. This speeds up the times. “The municipalities are not slow, but the administrations involved take years to pronounce, so when we design a plan for a reality, we find that it is approved 10 years later, when the reality is already different,” laments Tocón.

Torremolinos started in 1996 the path to update its PGOU. In 2020 it was published and less than a year later the TSJA has decreed its invalidity. “We will see if we resort, but this forces us to go back to 1996 with a much less guaranteeing legislation on environmental matters. This creates insecurity ”, recognizes Tocón. A security that real estate developers and builders also demand. “The viability of a project is linked to the deadlines and its compliance today with the duration of urban developments generates legal uncertainty and this does not contribute to attracting investment”, explains Violeta Aragón, general secretary of the Association of Promoters and Builders from Malaga. “Now we have to wait for the regulatory development of the standard,” he warns.

Changes in the effects of the cancellation of the plans

Like Torremolinos, a total of 490 municipalities in Andalusia are awaiting the process of adapting their management plans to the old LOUA. In some cases due to administrative obstacles. In others, because Justice has also annulled them “This means having to start over with all the procedures that had already been developed from the beginning, which slows down the process,” says the mayor of Chiclana, whose PGOU has also been thrown out. back by the TSJA for not having all the environmental requirements. “Most of the cases are due to non-compliance with environmental laws, not by the law of spatial planning or urban planning”, Pérez de Vargas points out.

In this sense, the LIST determines that the invalidity of part of a management instrument will not imply that of the parts that are independent of it. “With this it is expected that, if the courts consider that one part of the plan contravenes a norm, but the rest is correct and does not affect a substantial part, it will not be necessary to start all the procedures again. Most of the plans in Andalusia are on hold because they have had to start over from the beginning ”, explains José Carlos Babiano, general secretary of the Andalusian Council of the Andalusian Association of Architects, who intervened as an advisor in the preparation of the List and the socialist blueprint.

The law presents a clear ideological bias by expanding the use of responsible statements for construction, something that the socialist blueprint contemplated, but not so extensively. Environmentalists denounce that this can cause that if there is an irregularity that is not detected in the responsible declaration, then it is difficult to tear down what has been built. The law provides for the creation of a body of regional sub-inspectors to help with urban control. “The City Councils do not have the resources to control, but the Administration, just as it has decided to reduce the intervention in planning, could increase it in the fulfillment of that planning. It is a political question, ”says Galán.

Risk of it being a retarded instrument

“The LIST is not going to help me overnight. It will be necessary to see how and when the regulations are developed ”, warns José María Román, Socialist mayor of Chiclana, calling attention to the risk of this rule, which is the dependence on regulatory development. The LOUA, in force for 19 years, has not finished approving the regulations for which it envisaged a maximum period of one year for their entry into force. Among them the revision of the Andalusian Territory Planning Plan, then the territorial ones, and then the adaptation of the current PGOU to the changes. “This involves money and joining political wills. If the law is not accompanied by rapid regulatory development or equipped with means and instruments, it will be a law with delayed effects. A 2021 law that will come into effect in 2025 ″, says Roberto Galán, professor of Administrative Law at the University of Seville.

Weather in El Salto today: the forecast for Friday, November 26, 2021