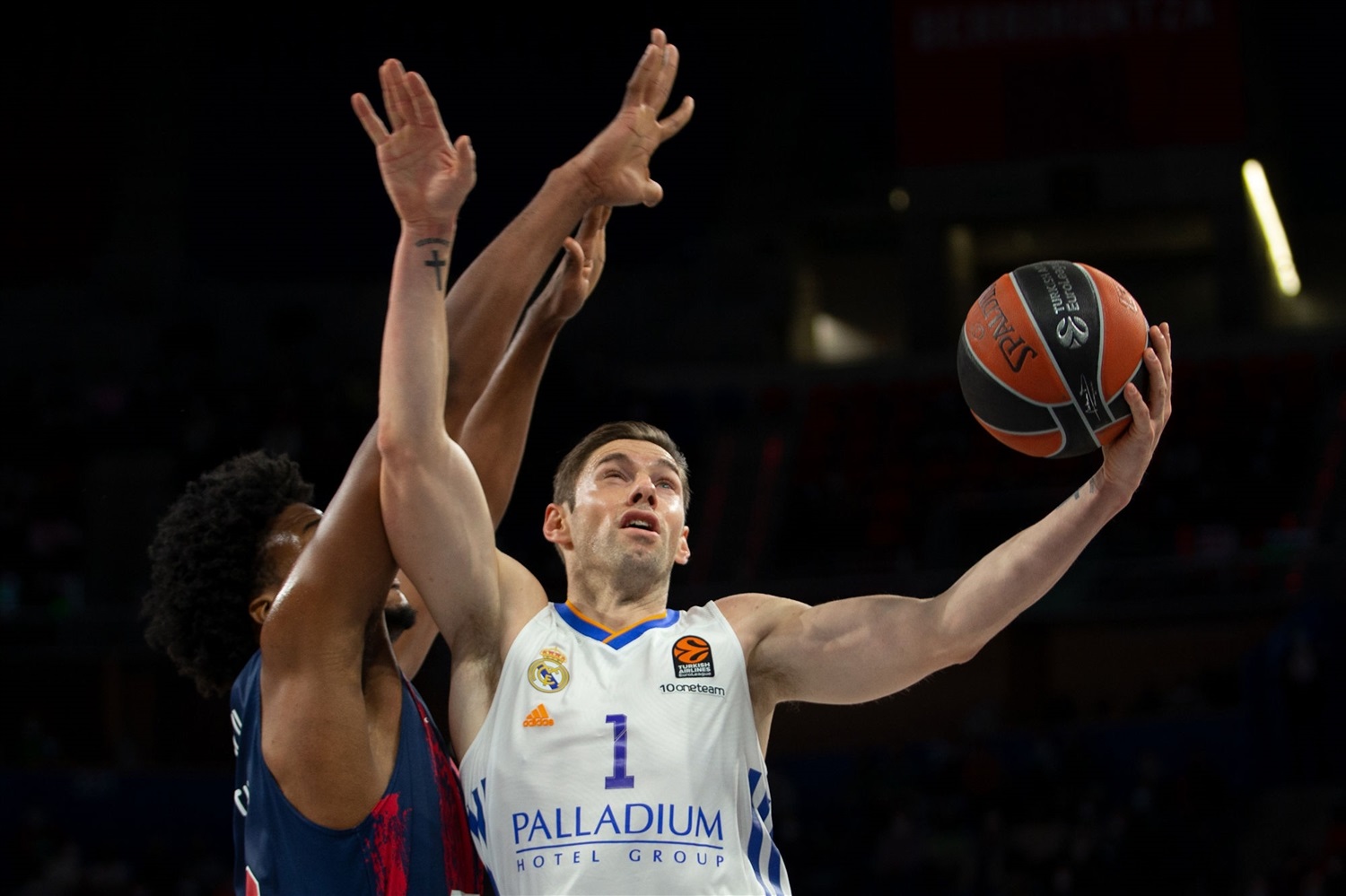 Real Madrid added their second thrashing against Baskonia in less than a month in Vitoria, the fifth consecutive victory in the Euroleague (tenth in 12 days) and the eighth in a row in an impeccable November in which Laso’s team has polished its rocky profile. Attacking from defense and without making concessions, the Whites managed a placid night at the Buesa Arena after breaking the match in just 13 minutes (20-37). Heurtel (12 points and 9 assists), Causeur (13 points), Tavares (12 points) and Abalde (11 rebounds) led an exercise of collective solidity that gripped a weak rival, who without having completely left Ivanovic’s couch lost suddenly the effect of Spahija’s balm. Just Enoch and Fontecchio tried to rebel against the Madrid roller. “We have received a lesson that has to serve us to grow in the future”, summed up Spahija himself. Baskonia remain at the bottom of the standings with only four wins in two months of competition.

The first quarter contained two lives in just 10 minutes, as a prelude to an uneven night at the Buesa Arena. Enoch starred in the effervescent staging of Baskonia against a slow Madrid reflexes at the starting blocks. The American center with an Armenian passport took advantage of the white imbalances and scored nine points in a flash, but Laso’s team was quick to react and his response was forceful. With four ex-Baskonistas in the quintet (Heurtel, Causeur, Hanga and Poirier), the Madrid plan took flight and the scoreboard took a swerve. From 9-5 from minute five to 11-23 just four later. A firm response that Abalde initiated and completed the French troops. Heurtel’s tact, Causeur’s accuracy (11 points in that section) and Poirier’s efficiency (four points in four minutes), put Madrid on the launching pad.

The final takeoff of the targets took place from the perimeter. Heurtel and Rudy shared the submachine gun and, with two triples per beard, they unwound Baskonia in three minutes (20-37, m. 13). In between, the spike between Heurtel himself and Baldwin, with pescozones, badass and shoves (settled with an unsportsmanlike one for each one), ended up off centering the Baskonistas and spurring on the visitors. The defense, solid and applied, and the dominance in the rebound allowed Laso’s team to rule the game and control the pace at will. Fontecchio was hardly able to step forward to try to rearm his team. Madrid reached the border of 20 rental points against an opponent on the wrong foot and anguished in their search for answers. From 26-45 in minute 16, to 34-53 at halftime, and 38-59 in minute 23. Not even a handful of turnovers lowered the Whites’ demarraje (42-66, m. 28).

On October 31, Madrid passed like a roller through Vitoria in the eighth day of the League (65-83), in a match that certified the cracks of Ivanovic’s project and inaugurated the cruising speed of Laso’s team (which closes the November with eight victories in as many games). A file that Spahija’s Baskonia could not discuss either. The feeling of liberation that the Baskonia players projected after the arrival of the Croatian 10 days ago, came to nothing against a solid and constant rival in their defensive endeavor. The new Baskonia looked a lot like the previous Dusko and the new Madrid continued to polish its defensive and rocky profile.