Marc Gasol will play in the LEB Oro with Bàsquet Girona, the team he founded and presides over 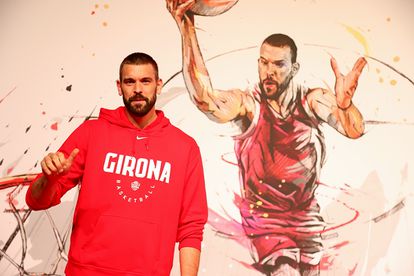 Marc Gasol, during his presentation as a player of Bàsquet Girona in the pavilion of Fontajau.Agusti Ensesa

President and player at the same time, that is the unprecedented challenge in elite sport that Marc Gasol assumes at Bàsquet Girona, the club that he also founded in 2014 and which competes in the LEB Oro League, the second category of Spanish basketball. “It was a decision based on sentiment, which goes beyond any other objective reason. The election of Girona was the first and the only one. I know it is not typical, but I am not a typical person and I make decisions like that. It is a message of commitment from the person ”, argued number 33 who will now compete in the Fontajau pavilion, where Bàsquet Girona plays and where he announced his long-awaited decision to more than a thousand fans. “I return with the illusion of giving back to the city everything it gave me,” he said.

After triumphing in the NBA, in the Spanish national team and in the ACB League, the 36-year-old center thus fulfills the romantic dream of some sports figures who return to the team of their origins in the twilight of their careers. It was the recent case of his brother Pau when, after being injured for more than two seasons, and at the age of 41, he returned to wear the shirt of Barcelona and the Spanish team before retiring in October this year. Marc also trained as a player at Barcelona, ​​but his career took off in Girona, when he was loaned to Akasvayu in 2006. There, under Pesic one season and Pedro Martínez another, and alongside such prominent players as Fran Vázquez, Raúl López, Fucka and San Emeterio, played and triumphed for two seasons in the ACB League before beginning his time in the NBA in 2008.

For years, the 2.13 meter pivot expressed his desire to return to Girona the love, the opportunity and the means it provided him to succeed in elite basketball. “The emotional relationship and the bond that unites us is very special. You have the opportunity to go beyond being a gamer. It is a different, difficult challenge, which I really want to do, ”said Marc. He added that he is not afraid of a conflict of interest due to his dual role as president and player. “When I’m around the team,” he said, “I’m just another player, perhaps bringing experience.” Marc’s premiere will be on December 3, in Fontajau, in the match corresponding to the tenth round of the LEB Oro against Peñas Huesca.

Akasvayu, buried in debt, sold its place in the ACB in 2008, and the club regained its original name, CB Sant Josep. But in April 2013 it was dissolved due to lack of financial resources. A year later, Marc Gasol, who was playing for the Memphis Grizzlies at the time, founded a club in Girona, the embryo of what is now Bàsquet Girona. The club started with five teams, two children, two cadets and a junior, and now has 20 teams, the professional in LEB Oro, another in the fourth division, as well as several in lower categories, 3×3 basketball and wheelchair .

Marc closes his career in the NBA, where he competed for 13 seasons and played his last game, on June 3 with the Lakers. In September he was transferred to the Memphis Grizzlies, the team with which he played his first ten seasons in the NBA, but it was a mere formality because only five days later he terminated his contract to return to Spain. He announced his retirement from the Spanish team at the Tokyo Olympics, after the quarter-final match against the United States on August 3, and after enjoying a break, he returned to training in Girona, where he currently resides.

Despite the fact that he has received several offers, one of them from Virtus Bolonia coached by the Spanish coach, Sergio Scariolo, since Juan Carlos Navarro also told him that Barcelona considered the possibility of incorporating him if he bet on competing in Europe, Marc has decided return to Girona. “I did not get to consider playing for Barça. When I finished with the selection there was a personal process. First, I decided that I wanted to keep playing. Then I had to recover some chronic sensations ”, referring to some physical ailments, he said. “I have been preparing with the team for eight and a half weeks and that has made me love the players and understand the implication of what they want to do both from the court and from the box.”

The Girona team was promoted to the LEB Gold in the 2019-2020 season, a year later it was classified in the 14th position. Now it occupies the 15th place, with two victories and seven defeats. After the penultimate setback, against Leyma Coruña (68-80), Bàsquet Girona dismissed the coach, former player Carles Marco. Jordi Sargatal led the team on an interim basis in the last match, on Sunday November 21, which Girona lost to Gipuzkoa Basket (85-81).

Marc joined Akasvayu in 2006 and immediately after his career took off when he replaced the injured Fran Vázquez on the Spanish team. He took advantage of the occasion and became one of the most outstanding players in the World Cup that Spain won in Saitama, Japan.

After winning the FIBA ​​Eurocup with Akasvayu, being named the best in the ACB League in 2008 and surpassing Arvydas Sabonis’s record by being named MVP in 11 rounds, he began his NBA career with the Memphis Grizzlies. He was a three-time All Star (2012, 2015 and 2017), starred in the historic opening jump of the 2017 All Star in New York with his brother Pau, was the Best Defensive Player in 2013 and won the title in 2019 with the Toronto Raptors. He averaged 14 points, 7.4 rebounds and 3.4 assists in 891 regular league games and played the playoffs in nine seasons. With the national team he played 191 games and won the World Cup for the second time, in 2019, and also the Eurobaskets of 2009 and 2011, and the silver medals in the 2008 and 2012 Olympic Games and in the 2007 Eurobasket.

Rivaldo and Verón, among the few precedents

Marc Gasol’s case is unprecedented in elite basketball. Some exceptions, in football, are those of the Brazilian Rivaldo and the Argentine Verón. After a long journey with Palmeiras, Deportivo, Barcelona, ​​Milan, Cruzeiro, Olympiakos and Uzbek Bunyodkor, Rivaldo returned to his country in 2010 to play in the Brazilian Second Division with Mogi Mirim, the club where he formed and of which he was then the president. His career continued with brief stages in São Paulo, the Angolan Kabuscorp, and again in Brazil with São Caetano. In January 2014, Rivaldo returned to Mogi Mirim, where he came to play alongside his son Rivaldinho. He retired in 2015 when he was 43 years old.

Verón, 41, signed in December 2016 for Estudiantes de La Plata, a club in which he started in the elite, with which he had already played in two stages and in which he finally served as president and player at the same time. He played five games in the Copa Libertadores in 2017.

Several basketball players, after finishing their careers, have subsequently been presidents of elite clubs, but never at the same time. Some examples are Jordi Villacampa and Juanan Morales at Joventut, Josean Querejeta at Baskonia and Predrag Danilovic, a few years ago at Partizan Belgrade. The most recent case is that of Tony Parker. The point guard who won four NBA titles with the San Antonio Spurs joined ASVEL Villeurbanne in 2009. In 2011, he took advantage of the NBA lockout to play seven games for the French team. In March 2014 he became the majority shareholder and four months later he became the president.