DOCUMENT. “He grabs my hand to pin it on his pants”: a woman says she was sexually assaulted by Nicolas Hulot in the 1990s 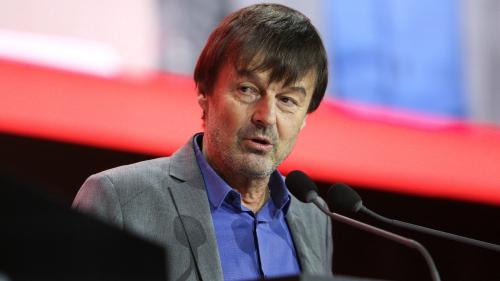 “If I am writing today, it is not for appeasement or for revenge.” A former TF1 employee sent a letter to “Special Envoy” after learning that the France 2 program had collected several testimonies from women claiming to have been assaulted by Nicolas Hulot. On condition of anonymity, this woman reports having met the host “in the early 90s” in a professional setting. She was 23 years old at the time. In her letter, she affirms in particular that at the end of a lunch, Nicolas Hulot would have “seized [la] hand to press it on his pants, at the level of his penis at the beginning of erection. “The facts described by this former employee are prescribed and Nicolas Hulot remains presumed innocent. Within the framework of the distribution of the number of” Special Envoy ” , Thursday, November 25, we publish his testimony in its entirety.

We are at the beginning of the 90s. I am 23 years old and for two years I have flourished in my first job at TF1. I work in a service in connection with many shows. I meet Nicolas Hulot for the first time during a work meeting around “Ushuaia” at which my boss and a handful of employees from our two teams are present. We discuss our actions and projects in a constructive and positive atmosphere.

Later in the day, I receive a phone call from Nicolas Hulot inviting me to lunch to continue the conversation around the program. I accept without hesitation, it is usual in my functions to have lunch with producers and animators. The day of our meeting, he picks me up at the office and takes me to a restaurant near the Champ de Mars. The lunch is very nice. We are talking about “Ushuaia”, his travels and the conversation is bound to be interesting, he has incredible adventures to tell. The meal finished, we return to his car.

“Once installed, he turns to me, tells me he had a good time and grabs my hand to press it on his pants, at the level of his penis at the start of his erection.”

It goes very quickly and my instinct is to burst out laughing. At the time, I already had a fairly assertive character and used to come out of embarrassing situations with humor. This is surely what I am thinking of doing at the time. There follows an interminable return to Boulogne (the headquarters of TF1), during which he did not say a word to me.

Back at the office, I go see my boss. I get on well with him and feel confident enough to tell him about the incident. I don’t feel traumatized, but hope that doesn’t make my work on the program too difficult. My boss reassures me about my mission knowing that on a daily basis I work especially with the teams and have no reason to meet the facilitator frequently.

He is still surprised by the gesture and we think to ourselves that, if he tries it, it must sometimes work. I admit, at that time, not to have found it more traumatic than that. I think that we were conditioned to this somewhat patriarchal universe where we did not dwell on more than limit attitudes; and I’m not sure I would tell this story if it ended there. A few days later, my boss calls me into his office. He shows me a fax sent by Patrick Le Lay [mort en 2020, il était à l’époque PDG de TF1].

“This is none other than a letter from Nicolas Hulot to Patrick Le Lay denigrating the work I do on his show and asking for measures to be taken to remedy it.”

At this point, I am shocked, I feel shaken and think my thin start to career is in jeopardy. “Ushuaïa” is one of the channel’s flagship shows and Nicolas Hulot is a star host. But in my dismay, I am lucky to have a boss who appreciates me, respects my job and decides to stand up for me. He is outraged, and tells me not to worry, that he will handle the situation.

I don’t know what he did, but I never heard of him again and I have infinite gratitude to him. I never had to deal with Nicolas Hulot again, the interactions going through his producer. I still lived a few happy and exciting years at TF1.

I didn’t mention it at the time. I didn’t think about this traumatic episode and got it out of my head. After all, I did well, a hand on a pair of pants is not that bad (sic) and my professional life has not been directly impacted. Thinking about it, I might have been afraid of having to justify myself in one way or another, to confront the gaze or possible skepticism of some. It wasn’t until years later, with the #MeToo movements, that this story came back to me and I told my very close friends about it. Without questioning my story, they were still surprised.

After all, we are talking about one of the favorite personalities of the French, a man that everyone admires, whose life is turned towards good causes and ecology … The fact that he can behave too disproportionate for a scrap of scratched ego seems mind-boggling.

A few years later, when other stories started to surface, I felt oddly relieved that I wasn’t alone. I was finally comforted in the fact that it was not my fault.

If I write today, it is not for appeasement or for revenge. I don’t feel the need. On the other hand, I want to give my support to the women who have perhaps been more affected than me and who have the courage to testify openly. They have all my admiration.

I hope that this will also help these people, who perhaps do not realize how much their actions are inappropriate, to become more aware of it so that our children evolve in a society where relationships are more peaceful.

Because yes, we can still flirt and seduce each other! The limit is simple: if you would not appreciate that one or one of our relatives is addressed in this way, it is because it is exceeded. Monsieur Hulot is intelligent and has a daughter, he should understand that.

The journalists of “Special Envoy” contacted Nicolas Hulot and his lawyers on several occasions. He refused to answer our questions in front of a camera. His lawyers also declined requests for interviews. Their client strongly disputes the facts and more generally claims to have never assaulted a woman in his life.

The State tackles counterfeiting, “crime of the 21st century”

Kiribati in lockdown for the first time since Saturday