Between immaturity and arrogance, prison and reprieve for three Dalton 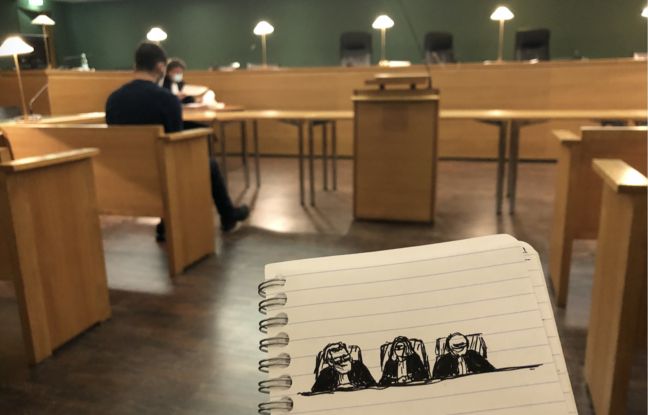 “He’s a kid, a 20 year old kid!” »Chanted Me Metaxas, pointing to his client in the box. At the Lyon Criminal Court, this Friday, it was as much a question of “immaturity” and “young people in search of identity” as of “dangerous driving” and “endangering others”. However, it is for these last facts that three young men, aged 19 to 20, appeared after participating in a rodeo in Bron, on October 23. They have been presented as members of the Dalton, which they persist in denying.

The detachment of one of them quite annoyed the president and her own lawyer. Mechanic on a permanent contract, without a record, who lives with his parents: the most stable of the three accused returned to his testimony with haughtiness and impatience. “At the speed I was going, they (the police) didn’t have time to see me…” He says he ended up in this rodeo “by chance”, when he was recruited and paid. by the Daltons to shoot in a clip, before reluctantly reciting: “My behavior was not appropriate.” He was sentenced to 12 months in prison, including 4 farms with electronic wristbands.

No provocations, no demands

His comrade, twice his height, spoke in a small voice. Handler recently, he claimed to have gone to ride a motorcycle, like every weekend, in Bron when he joined the procession announced on the Dalton Instagram account, which he denied consulting: “I heard about it. by word of mouth and I went. It will not happen again. His father, with whom he lives, “is not proud at all, and neither am I.” Verdict: 6 months probationary suspension for 2 years.

In the box, the alleged organizer still denies being a Dalton. If he was arrested in a black and yellow suit, it was because he found it “funny: I put on the top, that’s all, I didn’t think about it”. What does he think of the Dalton? “It’s not good,” he blurted out. Already sentenced twice, unemployed and “disabled” according to his lawyer, he was sentenced to 6 months and returned directly to prison.

“Immature minors” according to the defense

Over the course of the hearing, questions of traffic offenses gave way to the Dalton “phenomenon”. For Me Metaxas, “it’s a joke. Is it a structured group? No. We must not fall into their provocations. They are often minors, immature, in search of identity ”. Condemning the Dalton, he recalled, is precisely what they expect: “In comics, they are convicts! If you want to make them martyrs, they are going to be overwhelmed by their own success. “

The time was no longer for provocations at the time of the verdict, close to the complaints of the prosecution. In addition to prison sentences, the three accused were prohibited from driving vehicles relating to the A license, from appearing in Bron and in the 8th arrondissement of Lyon, and were subject to various civic obligations. The three defendants received their sentence by lowering their noses. Like kids.