The one who is heard angry, very angry, in an audio sent by WhatsApp is Cristina Caamano, the inspector of the Federal Intelligence Agency (AFI), the person appointed by Alberto Fernández to manage the public body that is in charge of espionage.

The former Prosecutor of Instruction was angry in that audio with her interlocutor Andrés Albor, a lawyer who for that final week of last September was still a member of the AFI. He was a deputy director in the Internal Affairs Directorate of the spy agency. Andrés Albor introduces himself on his Twitter profile as: “Father of 4 children, Bohemio de Villa Crespo. Lawyer and professional nuisance. Proletarian of Law. National & Popular. The Homeland is the other ”. In his posts he expresses his adherence to Kirchnerism. He is the first cousin of Adrián Albor, who is a defender of Luis D´Elía.

On September 24, Albor, along with other lawyers, had filed a criminal complaint against Mariano Llorens, a federal chambermaid from the Capital. The complaint, as it was released that same day, referred to the visits that the chambermaid had made to Mauricio Macri while he was President of the Nation. The two visits, revealed by the El Uncover portal, took place in December 2018 and September 2019. The lawyers, including Albor, denounced Llorens because the chambermaid must understand the case that began in Lomas de Zamora and ended in Comodoro Py in which illegal espionage is investigated during the macrismo. In this case, Albor represents Judge Juan Ramos Padilla, who is the plaintiff in the file. The complaint against Llorens, one of the six federal chambermaids in the Capital, was lodged in Sebastián Casanello’s court.

When the complaint was made public, the incident resonated with the AFI leadership. That a high-ranking official – who had joined the Caamano administration – made a complaint against a federal chambermaid of those who decides in cases of corruption committed by public officials could politically involve the Federal Intelligence Agency. That was why they ordered him to resign.

According to sources consulted by Infobae, the request for Albor’s resignation took place then. A former collaborator of Caamaño in the Public Prosecutor’s Office and right-hand man in the espionage agency was requested by RDS, whose name is kept confidential because he is still in the Federal Intelligence Agency. But since the resignation was requested after the complaint against Llorens was presented, it had to be pre-dated. “You have to present your resignation now. As of yesterday, ”said the messages from the Caamano emissary, as Infobae was able to reconstruct. That is why in the first audio published in this note, Caamaño says: “But hey, now we are going to say that you weren’t here. It is the only one I have left ”.

The hypothesis that Albor’s resignation was backdated is what the sources reveal and what emerges from a second WhatsApp audio accessed by Infobae.

There Caamano again goes to Albor and wants to know what day was his last performance as a civil servant. The date of resignation had to be in accordance with your last signature so that there would be no problems. In the same audio, Caamano criticizes Albor for the complaint and slides his suspicion about leaks from the Internal Affairs area.

“I ask you to tell me when was the last letter or writing, whatever you signed. Because this not only causes me a big problem but I am about to make a trip abroad and I don’t know if Alberto is not traveling abroad for this. For me this is a big problem. I don’t know who Rafa is, but you were already doing Homeland from here, if you wanted to make Homeland with the lawyers you shouldn’t have been here. Andrés… Yesterday I was very sad, today I am very angry .. Very angry. Because it also leaked from there. This is the second leak that I have from Internal Affairs. When he traveled … they also said that he had traveled … already … they did not name him. So it came out of there, I want to know what the buchón is, ”says Caamaño in the audio.

In the audio, Caamaño considers that the broadcast of Albor’s resignation before the fact that the complaint was revealed, became a big problem and the president could get her off an important trip in terms of intelligence collaboration. It also names two agents who traveled sent by the AFI to Bolivia when the scandal broke out over the denunciation of the shipment of security supplies from Argentina to the neighboring country when the coup against Evo Morales was carried out and the Argentine president was Macri.

The evidence gathered by Infobae from what was reported by various sources, plus what was revealed in different publications of the last days of last September and what is interpreted from the audios (only two are released) allow us to deduce that the intervention of the AFI pre-dated Albor’s resignation, something that constitutes an irregularity. And that was done to avoid repercussions for the complaint that the lawyer had made. The files of the agents are secret and the documentation that could reveal if the date of resignation of Albor was modified are under the jurisdiction of the AFI and therefore cannot be publicly consulted.

When Caamaño was appointed by Fernández, Albor celebrated her appointment :. On December 19, 2019, he said on his Twitter account (@abogadoNac_Pop): “I am very happy with the appointment of Dr. Cristina Caamaño, Attorney General, as the AFI’s intervener. I am truly excited, I know of your ability, your honesty and good repute. Thanks @alferdez and @CFKArgentina thank you x my country and x the people ”. Days later, in January 2020, Albor said: “She is a lioness with ovaries like 2 Fiat 600s, alone she is doing a professional job and worth knowing herself.” 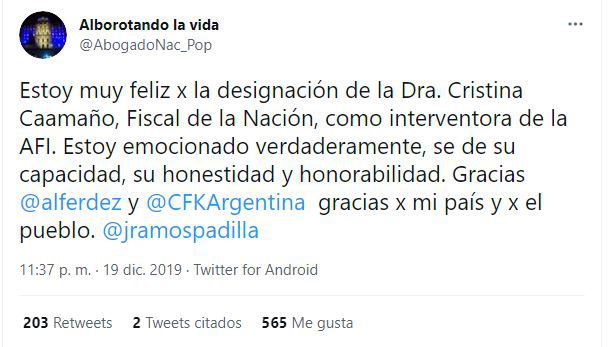 After his untimely departure from the AFI, just a few days ago, on his Twitter account, Albor replied to a tweet to the ruling party deputy Rodolfo Tailhade in which he said: “… If you denounce Llorens and they send you a stamp to your house, it does not make sense but they are those things that have no explanation. We are also going to continue looking for Justice ”.

The stamp had been stuck in the AFI after the complaint against the chambermaid Llorens. By order of Caamano, who did not comply with one of the first unwritten rules of current counterintelligence, which could be summarized as follows: “If you are a spy, never send audios. Never again”.

Lack of merit for Caamaño for the leaking of spy identities

The scar of gender violence throughout history

Video: ‘Orejas’, another criminal boss of the Clan del Golfo in Antioquia, was killed in Army operations

The “threat” in a duel against Boca and the intense family dives: the anecdotes of Juan and Bautista, the new Barros Schelotto dynasty

In the PRO, a group of 30 leaders from the interior rebels against the Buenos Aires leadership and sets up a pole of power