The return of the effectiveness of OM and Milik to hope to qualify? 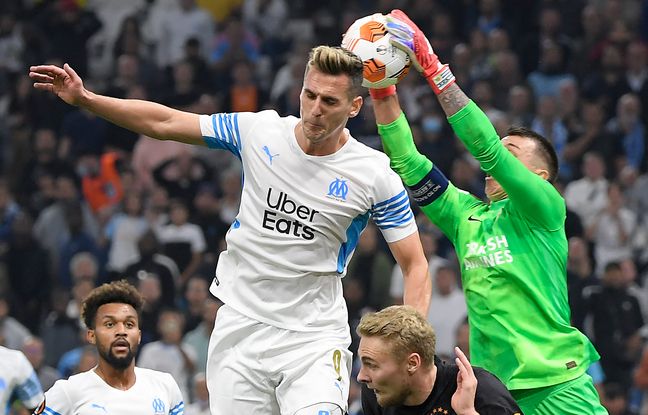 Does Arkadiusz Milik always have an 89% chance to score when thrown in front of goal? This is the estimate that Dimitri Payet made during the match against Lorient (4-1) when he preferred the Pole, so that he unlocked his goal counter this season, at Pape Gueye. Except that since this match against Lorient, more than a month ago, Milik has scored only one goal, against Lazio (2-2), from the penalty spot, for a total of two goals in nine games. Not sure, therefore, that this percentage reaches that of early October in the head of number 10 OM. We will not know anyway since the Reunionese is suspended for the match between Olympique de Marseille and Galatasaray, this Thursday in the Europa League (6:45 p.m.).

All the more reason for Milik to regain his efficiency in the home stretch of the qualifying phases of the competition. “We are still in the process of qualifying for the knockout stages of the Europa League. We would like to achieve it, we have to win the next two games to get out of the group. I hope that will work ”, wanted to be realistic the striker, in the Polish media Przeglad Sportowy during the last international break.

“He could not prepare with the group”

And the ineffectiveness of the striker coincides with that of his club. OM had an average of 1.5 goals per game, when the club has stagnated at just over one goal since its return to Lille (2-0 defeat) on October 3. The number of points gleaned per game has also fallen from 1.77 to 1.37 points since he returned to the workforce in all competitions.

But Jorge Sampaoli, the coach, does not doubt for a moment the importance of the Pole. “It was important for us to get him back, but it is true that the team must offer him more situations that adapt to his game. It will take a little time, he could not prepare with the group, ”he explained a few games after his return. And when we know the tactical requirement of the Argentine, difficult to catch up.

After an injury contracted on the last day of Ligue 1, the Pole stayed away from the pitch throughout the summer. He even had to wait until the beginning of October to push back the lawn. After a half-white season at Napoli and a good adaptation to Marseille, this injury cut him off in his regained momentum. More physically, than mentally. “He had serious injuries in Napoli, but despite that he scored a lot of goals, like in 2018-2019. When you have two injuries of this type in a row, and you come back taking all the risks, I don’t think it could have affected him more than that, ”said Bartłomiej Bukowski, journalist for Sportowefakty.

For the person concerned, the main thing is to continue the matches. As he did when he arrived in Marseille, and since his return from injury in early October. “If you are able to play consistently and consistently for 2-3 seasons, you develop much faster. I can see it since I came back. I need regular playing time and some peace of mind to put it all back together. The life of a footballer is a process of continuous development and it never stops, ”he reminded Przeglad Sportowy.

Need to be surrounded

For Bartłomiej Bukowski, it is more on the side of the player’s characteristics, than his current form, or the tactical scheme put in place by Jorge Sampaoli, that must be looked at. “In Poland he is not necessarily seen as a striker who scores goal after goal, even when he has had good seasons for Napoli. He has technique, can score nice goals, but he also has a funny ability to spoil in front of the opposing goal. I’m not sure it’s really this type of killer in front of goal that OM would like to see, ”he tempers.

To shine, Milik needs to be well surrounded, as was the case with Dries Mertens in Italy, and now Dimitri Payet in Marseille. “Our cooperation is good because we are in the field at 5, 10 or 15 meters, so we have close contacts. He is a player with whom I get along well. He is looking for me with vertical passes, you can see this “feeling” between us, “recalled the number 9. Thursday night, it will also be at Under, the most satisfactory rookie since the start of the season but who is uncertain, Konrad, Lirola or Amine Harit to regain efficiency, whether it is to serve their attacker, or to relieve him of scoring.