More than 4,000 femicides a year and a lot of outrage: Latin America’s reasons for protesting 25N 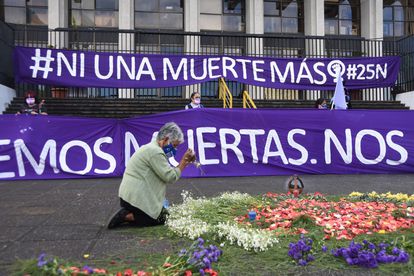 A woman prepares a Mayan altar in memory of the victims of femicide in front of the Supreme Court in Guatemala City on November 25. ORLANDO ESTRADA (AFP)

A Mayan altar in front of the Supreme Court of Justice of Guatemala, banners with the faces of the victims of femicide in front of the Argentine Congress, pink crosses in front of the National Palace of Mexico and marches and rallies called in dozens of cities in the region. Latin American women are taking to the streets this Thursday, on the occasion of the International Day Against Gender Violence, to remember the murdered women and demand justice and an end to the violence against them.

According to a report recently published by the Economic Commission for Latin America and the Caribbean (ECLAC), at least 4,091 women were victims of femicide in 26 countries of the region in 2020, a figure that represents a drop of 10.6% compared to 2019. Murder is the maximum expression of gender violence, which continues to be present in the lives of millions of women of all ages. ages. “We will not tire of making visible the violence that affects women and girls in our region on a daily basis and that affects society as a whole, since it constitutes an obstacle to the achievement of equality and sustainable development and peace” said ECLAC’s executive secretary, Alicia Bárcena, when presenting the report.

By country, Honduras tops the tragic regional list of femicides, with 4.7 women murdered per 100,000, followed by the Dominican Republic (2.4) and El Salvador (2.1). In all three countries, there was a drop in murders of women based on gender in 2019, as in Bolivia, Brazil, Colombia, Guatemala, Paraguay, Puerto Rico and Uruguay, while in Ecuador, Costa Rica and Panama those numbers increased Over the previous year.

In 1999, the UN declared November 25 the International Day to Eliminate Violence against Women in honor of the Mirabal sisters, three Dominicans who were assassinated for their political activism against dictator Rafael Leónidas Trujillo. This year, many Central American women are especially aware of their struggle in places like Nicaragua, where there are 14 women deprived of liberty in prisons or under house arrest for the hunt launched by the Government of Daniel Ortega and Rosario Murillo against their critics before the early elections. of November.

Today “International Day. for the elimination of violence against women ”we commemorate the murder of the sisters. Mirabal by order of the dictator Trujillo. On #Thread We demand the freedom of 14 political prisoners of the OrtegaM Dictatorship. Libertarian butterflies that live cruel treatment. pic.twitter.com/6wWefEQ54K

“In many countries, women are going to take to the streets to march for their rights, for a life without violence and demanding justice for those who have been victims of sexist violence in any of its forms. In other countries they will march under threats and in others they will not be able to do so at all. Central America is one of those regions where women will face these three situations on the same day, ”Nicaraguan sociologist Elvira Cuadra wrote this Thursday in an article titled We uncomfortable women. In it, he recalls that in addition to his fellow prisoners, women’s organizations in El Salvador have been raided this week.

“In Central America, women do not live free from violence, they rape us, they kill us, they assault us. Nor can we exercise our legitimate rights; we are forced to strenuous and unpaid work, to take care of the families and raise our children alone ”, he adds in his article (…) To survive, we have to emigrate in caravans to the north or to political exile”, He has written. “But despite adversity and the effort of power to crush us, we are alive and crying out.”

In Mexico, the day has started early with protests and monuments and emblematic buildings of the capital fenced off to avoid disturbances. In the morning, a group of women managed to circumvent the protection fence and stuck dozens of pink crosses for those killed on the doors of the National Palace, the seat of the Federal Government. The North American country arrives on November 25 plunged into a public security crisis due to sexist violence that, far from ending, worsens. Between 2018 and last year alone, 11,602 women have been murdered in Mexico, according to data from the National Institute of Statistics and Geography (Inegi). 3,957, in the last year.

The message of the Government of Andrés Manuel López Obrador has focused on demonstrating progress in the fight against crimes against women and insisting on the feminist vocation of the president, even when he has even insinuated that the women’s movement has become a movement opposed to his administration. The figures cited by the authorities refer to specific reductions in crimes such as femicide and rape. In contrast, civil society organizations that work with victims on a day-to-day basis point out that, in a broader context, feminicidal violence in the country is far from over and far from improving.

Regarding femicides, murders of women because they are women, so far this year 809 investigation folders have been opened in the country for this crime, compared to the 344 that were opened in the same period of 2015, 135% more, according to official figures. There is, in the definition of the crime, the first obstacle for the families of the victims and civil organizations. Not all violent deaths of women in Mexico are investigated as femicide, even though there are Supreme Court criteria that indicate it. “Every time younger and more cruel women are murdered”, points out the director of the National Femicide Observatory, María de la Luz Estrada and adds another piece of information: “Femicides of girls and adolescents from 0 to 17 years of age have increased every year with a year from 2015 to 542 in September 2021 ″, citing figures from the Executive Secretariat of the National Public Security System. Thousands of women will take to the streets of the country this Thursday again to demand justice and an end to murders, rapes, disappearances, harassment and impunity. They will march for their daughters, for their mothers, for their friends. For those that come and for those that are no longer there.

Banners in the Argentine Congress

In Argentina, on average, one femicide has been registered every 31 hours so far this year, according to the Observatory of Femicides of the National Ombudsman’s Office. A total of 241 women were killed for being women between January 1 and November 15. More than 90% knew their perpetrator. The data show the difficulty of the South American country to put a stop to these crimes despite growing social awareness and the laws in force that seek to protect the victims.

On the International Day for the Elimination of Violence against Women, families and organizations mobilize in the streets and through social networks to demand more resources, institutional training and educational changes that favor the end of all types of violence.

Large banners with the faces of dozens of victims of femicides were installed on the gates in front of the Argentine Congress this Thursday. Mothers, fathers, brothers and other relatives of the deceased demand justice in the rain that falls today in Buenos Aires and also ask that the State take measures to prevent other women from suffering the same fate. Throughout the afternoon, other rallies are planned in squares across the country.

“Today Micaela García would have turned 26 years old. The law that bears his name promotes gender training for the three branches of the State. Their struggle calls us to continue building a Argentina Without Violence. As a society we must join forces so that no more is missing ”, tweeted the Argentine president, Alberto Fernández, referring to the young woman raped and murdered five years ago by Sebastián Wagner, who had a previous conviction for rape and was with the benefit of probation when he committed this new crime, for which he was sentenced to life imprisonment

Femicides are the tip of the iceberg, but below there are thousands of women, girls and adolescents who suffer psychological, economic and physical violence. The Supreme Court’s Office of Domestic Violence has received almost 11,000 complaints since the start of the pandemic in March 2020.

Concern and protests called in Colombia

In Colombia, the pandemic did not stop gender-based violence. This Wednesday, the Attorney General of the Nation, Margarita Cabello Blanco, described the latest official figures known as “worrying”. Until October, 98,545 women were victims of some type of violence, of which 23,679 were for intimate partner violence, 8,534 for intra-family violence and 15,644 for sexual offenses. So far this year 797 women have been murdered, 88 more than in all of 2020.

In Bogotá, according to data from the Secretariat for Women, 79 women have been murdered in 2021. In these months, 3,579 cases of sexual crimes have been reported in the capital, in which the most affected are girls between the ages of six and 13. To protest against these data, women’s organizations have called rallies at 7 pm local time in the “main squares and parks of Colombia.” In addition, the groups in favor of the decriminalization of abortion have also called to take to the streets this Thursday.

Gender-based violence still does not make the headlines in Brazil

More than four Brazilians were murdered in sexist attacks every day in 2020; every eight minutes they were attacked for the mere fact of being women. The data places Brazil as the fifth Latin American country in the rate of femicides with 1.6 per 100,000 inhabitants, according to the regional balance of ECLAC. They added 1,738 murdered women, 310 less than a year before. Despite the serious panorama portrayed by statistics, violence against women has not made the headlines or motivated protest demonstrations as in other countries in the region. Rather, it is a day of insisting on institutional campaigns so that women denounce their aggressors and so that society accompanies them in the hard trance.

The Minister of Women, Family and Human Rights, Damares Alves, who is an evangelical pastor, has been campaigning for days within the patterns of an ultra-conservative government like hers. The minister has announced a coordination center to combat domestic violence, launched a didactic campaign to encourage those attacked and threatened to report, inform about institutional support networks and has once again demanded that pastors and priests report the cases of sexist violence that reach their ears.

In the last year, thousands of pharmacies, branches of the Bank of Brazil, stores and institutions have joined the Sinal Vermelho campaign, red signal, promoted by the Association of Brazilian Magistrates. The mechanics are similar to those used in other countries: if a Brazilian shows someone the palm of her hand with a red cross, it is because she needs help in the face of an aggressor and she wants the police to be alerted.

Jalisco Security: Locates her wounded husband outside her home; dies in the hospital

A gendarmerie officer refusing vaccination, relieved of his duties