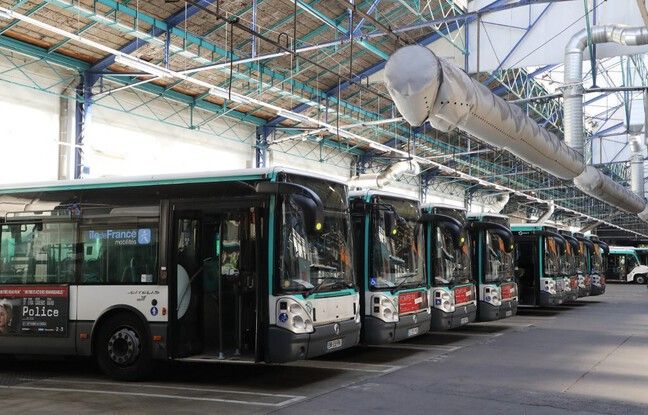 Public transport is still a long way off to have recovered from Covid-19 in France. Their attendance even continued to decline in 2021 compared to last year, according to figures from
Mobility Observatory published this Thursday by
the Union of Public and Rail Transport (UTP), professional union which brings together public transport companies in France.

This survey, conducted by Ifop, surveyed in September 1,500 adult people living in an agglomeration of 50,000 inhabitants or more. Among them, 60% said they used public transport regularly in 2021, against 61% in 2020. And above all 73% in 2019. This drop affects all modes of public transport uniformly, from the bus to the RER. “The only exception is the train, in relative growth and therefore used more over long distances”, points out Thierry Mallet, CEO of
Transdev and vice-president of UTP.

Transport users because they have no other choice?

These two consecutive years of decline are all the more striking as they follow years of increase, the share of regular users of public transport having fallen from 67% in 2015 to 73% in 2019. The larger the size of the agglomeration decreases and the lower this share. Thus, in Ile-de-France, it still stands at 75%, all the same 10 points less than in 2019. It falls to 58% in agglomerations of 100,000 inhabitants or more in the provinces, and to 34% in those between 50,000 and 100,000 inhabitants.

Above all, among travelers who use public transport, 26% say they do so because they have no other choice, and 28% say they take them less often than before. 56% (of these 28%) because they travel less, but also 32% because they fear being contaminated by Covid-19.

A fear that sticks to the skin of public transport: 64% of respondents consider it the place where the risk of contamination is greatest, in front of bars (43%), family meals (38%), sports halls (32%). “This perception is particularly linked to the fact that we are surrounded by people we don’t know,” believes Thierry Malle. However, no study has shown that the risk is greater than elsewhere. Rather, it is quite the opposite. “

Containment and travel restrictions, to which must be added the rise of teleworking, have resulted in a general decline in the mobility of the French. Decline which affects public transport as well as private vehicles. The UTP is still autosolism the big winner of the health crisis. The modal share of private vehicle trips, which represented 80.8% (in passenger-kilometers) of domestic passenger transport in 2019 in France, increased by 4.4 points in 2020 to reach 85%. At the same time, the modal share of public transport trips (rail, bus, coach) increased from 17.6% in 2019 to 14% in 2020.

Curves that go in the opposite direction to what it would take to achieve carbon neutrality in 2050, an objective that France has set itself as part of the fight against climate change. “The transport sector represents 31% of French greenhouse gas emissions in 2019. And of these 31%, the private car accounts for more than half”, recalls Marie-Claude Dupuis, director of strategy, innovation and development of the RATP Group, also vice-president of the UTP. The urgency is therefore to reduce the modal share of the car. “We will probably not be able to make it zero, this mode of travel being the only possible for a good number of French people, but we can reduce it to 60 or even 55%. [d’ici à la fin du prochain quinquennat] “, Believes Thierry Mallet.

Even though the use of cycling and walking have increased sharply since the start of the pandemic, these active modes are mainly used in the heart of metropolitan areas. And despite their progress, their modal share remains low, estimates the UTP. Around 3% for the bicycle. For the trade union, public transport is the only mode capable of absorbing the flow of additional travelers that would result from a drop in the use of private cars. Hence the call to “finally give priority to public transport”, title
of the manifesto that the UTP is sending this Thursday to the 2022 presidential candidates. It has the objective of doubling the modal share of urban public transport by the end of the next five-year term, which would bring us around 30%.

Developing the offer much more than making it free?

Should we still succeed in making public transport attractive (again)? By making them free, for example? The solution is already applied in several territories and has come up a lot during the regional elections this year. Thierry Mallet dismisses it. “Public transport is already much cheaper than the car,” he recalls. And we can see it in the Observatory: only 14% of respondents say they use public transport because it is more economical. “

The first reason given is practicality, because they avoid wasting time because of traffic jams or / and the search for a parking space, indicates the Mobility Observatory. And to the question “What would make you take public transport more?” “, An” increase in frequency “collects 84% ​​of” yes “, a” circulation over larger areas “77%, a” circulation earlier in the morning or later in the evening “64% …

The whole stake then is to increase the offer, deduces the UTP. In any case, this is the meaning of the twenty measures it formulates in its manifesto. In particular, the union calls for more lasting support from the State for infrastructure development projects and urban or peri-urban transport, “by moving from a logic of call for projects to a logic of continuous support, with an envelope of 2.5 billion euros over the five-year term, ”specifies Thierry Mallet. This will involve supporting the development of new metro, tram and bus infrastructure with a high level of service, details the manifesto. But also relay car parks and carpooling lines in less densely populated areas, where traditional public transport solutions are not always possible and the car the only possible mode.

What reasons would make you prefer public transport to the car? This is also a question asked in the Mobility Observatory to users of personal cars among the 1,500 surveyed. The answers ? “Even more parking difficulties” for 45% of them, an “increase in traffic jams” (42%), an “even higher overall cost of the car” (42%) and an “increase in pollution” (28%), to use the first four reasons given.

In fact, the last few months have been marked by a surge in fuel prices, but also a return to traffic congestion in major French cities. “+ 25% in Ile-de-France + 38% in Marseille, + 85% in Lille, the Monday of the start of the 2021 school year compared to that of 2020”, recalls the UTP.

Public policies are also likely to disadvantage the use of private cars. By pedestrianizing city centers, by establishing urban tolls, by generalizing paid parking, to take up the first three ideas on which the French people surveyed by Ifop are thinking. A delicate subject in France, as the “yellow vests” movement has shown. “These constraints can in any case be considered only if alternatives to the private car really exist”, one indicates to the UTP. Where we therefore invite, above all, to take the problem in the other direction. In other words: make public transport attractive.

“God does not abandon us to the night”