“Help me”, writes kidnapped man in bank document; is rescued

Employees of a bank branch in Puente Alto (Chile) became the heroes of a man who had been kidnapped and that he used a money order to request help when he was accompanied by his captors to withdraw his “ransom”, not counting on the quick reaction of the victim and the authorities.

According to what was released by local media Radio Bio Bio, the events occurred last Monday, when bank employees received a document for a movement which, instead of having been filled in with the details of the operation, had written the message “Help me … you have me threatening” (sic).

Immediately the cashier in charge of treating him reported it to the police authorities without the captors suspecting him, however, only one of the criminals was arrested at the scene. The sum they intended to collect for said ransom amounted to 40 million Chilean pesos.

According to the victim, his deprivation of liberty started in a gas station, where he was approached by the kidnappers and those who they took him to a camp in Bajo de Mena; He was there for several hours tied hands and feet and with his face covered while the criminals explained to him the amount they were demanding and how they would obtain it. Due to the amount, the protocol required the filling of a document in order to make the withdrawal valid, a situation that the man took advantage of to request help.

After the arrest, local authorities confirmed this Wednesday that the person detained for said fact had received preventive detention, while the kidnapped man was channeled to the Victims and Witnesses Unit of the Prosecutor’s Office. It has not been released if the case could have more involved under investigation or if other complaints for the commission of this crime exist in the investigation folders. 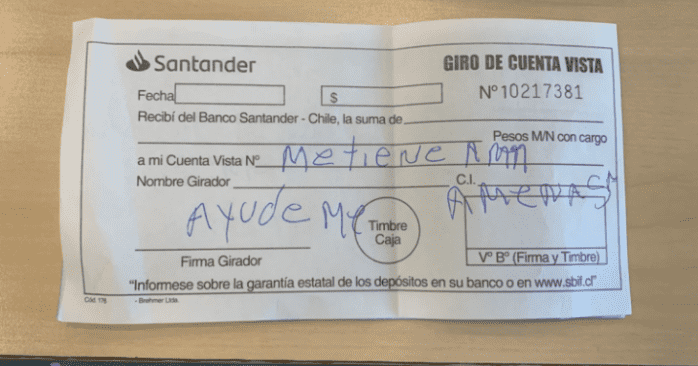 Bank employees received a document for a movement with the following message. SPECIAL

Pfizer, the first vaccine for children aged 5 to 11 approved in the EU