Every year since at least the arrival of the New Kingdom of Ancient Egypt, around 1550 BC, the expected season of the floods was closely associated with the so-called feast of Opet. For the ancient Egyptians, the annual flooding of the Nile River was synonymous with the fertility of the land, a time of blessing and joy, and was therefore received with a majestic ceremony – and still today surrounded by a certain mystery – in the city of Thebes. , the current Luxor and the ancient capital of Egypt for long periods.

Although no text is preserved that directly describes the importance of that event, and therefore its exact purpose is not known, the reliefs of the Karnak temple in Luxor offer a valuable pictorial representation of the festival. and its evolution over time. And thanks to its details, we know that the main part of the show consisted of a great procession during which the statues of the three most sacred gods of Thebes, Amun-Ra, Mut and his son Jonsu, were transported in wooden boats along the along the monumental Avenue of the Sphinxes, a 2,700 meter path with hundreds of sphinxes on both sides that connects the temples of Karnak and Luxor.

After several decades of work and stoppages, Egypt has managed to complete the restoration of the avenue, considered by many to be the most important in Ancient Egypt and for a long time blurred and partially buried under other constructions. And to celebrate the ambitious feat, which has been accompanied by a great renovation of the city of Luxor, the country celebrates the recovery of the ancient splendor of the great avenue this Thursday with a lavish recreation, with contemporary touches, of the Opet festival .

The ceremony has been planned to ask the gods for another type of flood equally vital for Egypt, that of tourists, in a city that seeks to position itself as the largest open-air museum in the world. “It is a great day for us because we will show these projects to the whole world; our dreams will come true very soon, ”Salah El Masekh, director of excavations in Karnak, slides to EL PAÍS.

Completed during the reign of Pharaoh Nectanebo I of the XXX dynasty, in the 4th century BC, the great avenue was flanked by two rows of hundreds of ram-headed sphinxes, seated on pedestals of sandy rock and arranged one front to the other. Over the centuries and its decline, the road disappeared under layers of sediment and sand, and the urban development of Luxor finished burying it completely until, in the 1940s, the place was rediscovered by archaeologists. To bring it back to light in its entirety, the authorities have had to allocate millions of euros to excavate it, restore it and pay compensation to those affected by the project, in some cases with controversy involved. Today, many of the 1,350 sphinxes are already restored. 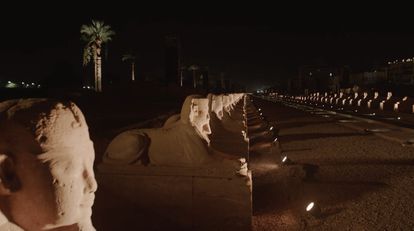 General view of the avenue.

One of the most anticipated components of the event, which aims to repeat the success of the great parade of mummies through Cairo last April, is once again the music, which once accompanied the procession and was sung by priests and priestesses with the help, it is believed, of the public who attended. In this case, the composition is signed by the director Nader Abbassi, one of Egypt’s most prestigious masters, with Ahmed El Mougi, who have prepared together three themes, one for each god, with texts inspired by the songs inscribed in hieroglyphics that are preserved in columns of the temple of Luxor. Unlike the parade in Cairo, the music is now recorded, but with 150 live drummers and a popular live folk song. In addition, illuminated boats on the Nile near the Luxor temple, horse carriages parading through a new walkway built along the river and dance performances in different parts of the city.

“The parade of the mummies was for death and eternal life in the afterlife; while this time it is more about life, about the celebration, a party, the flood that gives food, the power of the three gods given to the king of the time ”, says Abbassi. “We are having a great celebration to recreate all these moments again, and to show the world how important that celebration was for Egypt”, explains to this newspaper Zahi Hawass, former head of Antiquities in the country and leader of the team that between 2005 and 2011 excavated about 2,400 meters of the avenue.

Beyond the work carried out in the archaeological sites of Luxor, which have also included parts of the Karnak and Luxor temples, this Thursday’s celebration seeks to focus on the rest of the city’s tourist attractions, such as its traditional market. , the boat trips, the cruises on the Nile and the ascents in hot air balloons with views up to the valleys of the Queens and the Kings. To this end, the infrastructure of Luxor has been renovated, including some streets, squares and shops.

Encouraged by the good reception of the mummy parade in Cairo, the Egyptian authorities, led by the Ministry of Tourism and Antiquities, plan to organize more events of this type in other tourist governorates of the country in the coming months, including Aswan, in the extreme south, and Santa Catalina, in the Sinai peninsula.

“Nabilla: Without filter” invites to see Nabilla Vergara from a different perspective

The commemorative coin “Niños con Papalote” which is priced at more than 4,900 pesos online

The commemorative coin "Niños con Papalote" which is priced at more than 4,900 pesos online