Security in Jalisco: He requires that he deposit 10,000 pesos in his account and takes nine cell phones

A young man entered a convenience store located in the Libertad neighborhood in Guadalajara to demand that the employee deposit 10,000 pesos on his bank card, in addition to giving him several cell phones from the counter; the suspect was later detained with the support of the “Zeus” helicopter and through coordination with the elements that were in the streets.

At approximately 1:00 p.m. this Tuesday, during a surveillance tour of elements of the Guadalajara Police at the intersection of Plutarco Elías Calles and Pablo Valdez streets, the officers observed that a subject ran out of a business, and behind the suspect, an employee who pointed out that it had just been robbed by the guy.

The uniformed men were for the designated one, a follow-up was also carried out through the “Zeus” helicopter, coordinating both on the ground and in the air, they arrested the alleged thief streets ahead.

After inspecting it under protocol, The subject was secured nine cell phones, a bank card and a .32 caliber firearm with a useful shot. 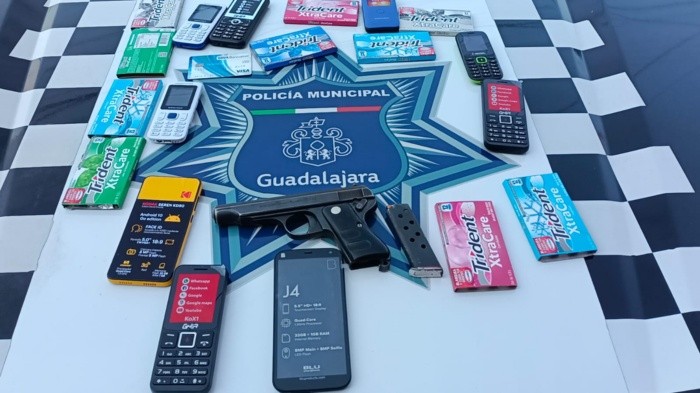 Uniformed they managed to recover all the stolen objects. SPECIAL

The business associate entered into a nervous breakdown, since, according to what she told the gendarmes, he threatened her by pointing at her head to make bank deposits, two of five thousand pesos, to her personal account and also threatened her to hand over the cell phones that were on the counter. She was checked by paramedics, who were eventually able to stabilize her.

The detainee identified himself as Yoshua “N”, 21 years old. It was made available to an agent of the Public Ministry.