Lille-Salzburg: Losc continues a second victory and takes a big step towards qualifying in the round of 16 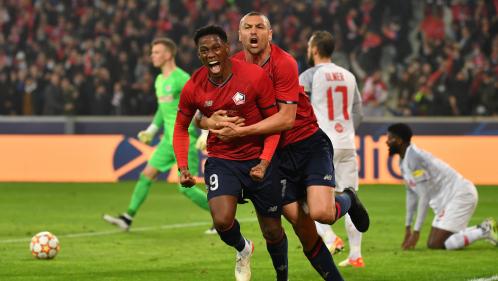 For the first time since its inauguration in 2012, the Pierre-Mauroy stadium vibrated for a victory for Losc in the Champions League on Tuesday 23 November. The Mastiffs won 1-0 against Salzburg, thanks to a goal from Jonathan David. A success that allows them to take the lead of group G from their evening opponent and get closer to qualifying, since in the other group match, Sevilla won against Wolfsburg (2-0). Jocelyn Gourvennec’s men are at least guaranteed to qualify for the Europa League.

While Losc paid tribute to the players who had played in the first Champions League in the history of the northern club, 20 years ago, their successors in the Lille jersey wrote a new page in this history, by becoming the first Mastiffs to string together two victories in the most prestigious of European competitions. After their victory in Seville on November 2, the Lille have signed a new success against the first of the group before the meeting, Red Bull Salzburg.

The Northerners, however sluggish during the first half hour, woke up, like their public, after thirty minutes of play and a missed opportunity from Burak Yilmaz at the penalty spot. Borrowed but not stingy with efforts, the Turk reacted immediately by signing a breakthrough in the Austrian defense, which led to the opener of Jonathan David, on a ball twice blocked by players from Salzburg.

12 – Jonathan David has scored 12 goals this season, only Erling Haaland (13) has scored more often in all competitions among players born in 2000 or later in the European Top 5. Promising. #LOSCSAL #UCL pic.twitter.com/06F3ATOizo

Again jostled at the start of the second period, the Mastiffs showed great defensive solidarity to counter the onslaught of the Bullen, led by their young nugget Karim Adeyemi, in all the right shots and who almost got a penalty for a few centimeters . After allowing the strong Austrian time to pass, Jocelyn Gourvennec’s men moved forward, without however obtaining clear chances.

Even without shining, with only two shots on target during the match, this short success was enough for the happiness of Lille, who finished the match hands on their knees after having made many efforts to maintain their advantage. They now have their destiny in hand and a draw will be enough for them on the last day, in Wolfsburg, on December 8 to qualify for the knockout stages of the Champions League for the second time in their history.