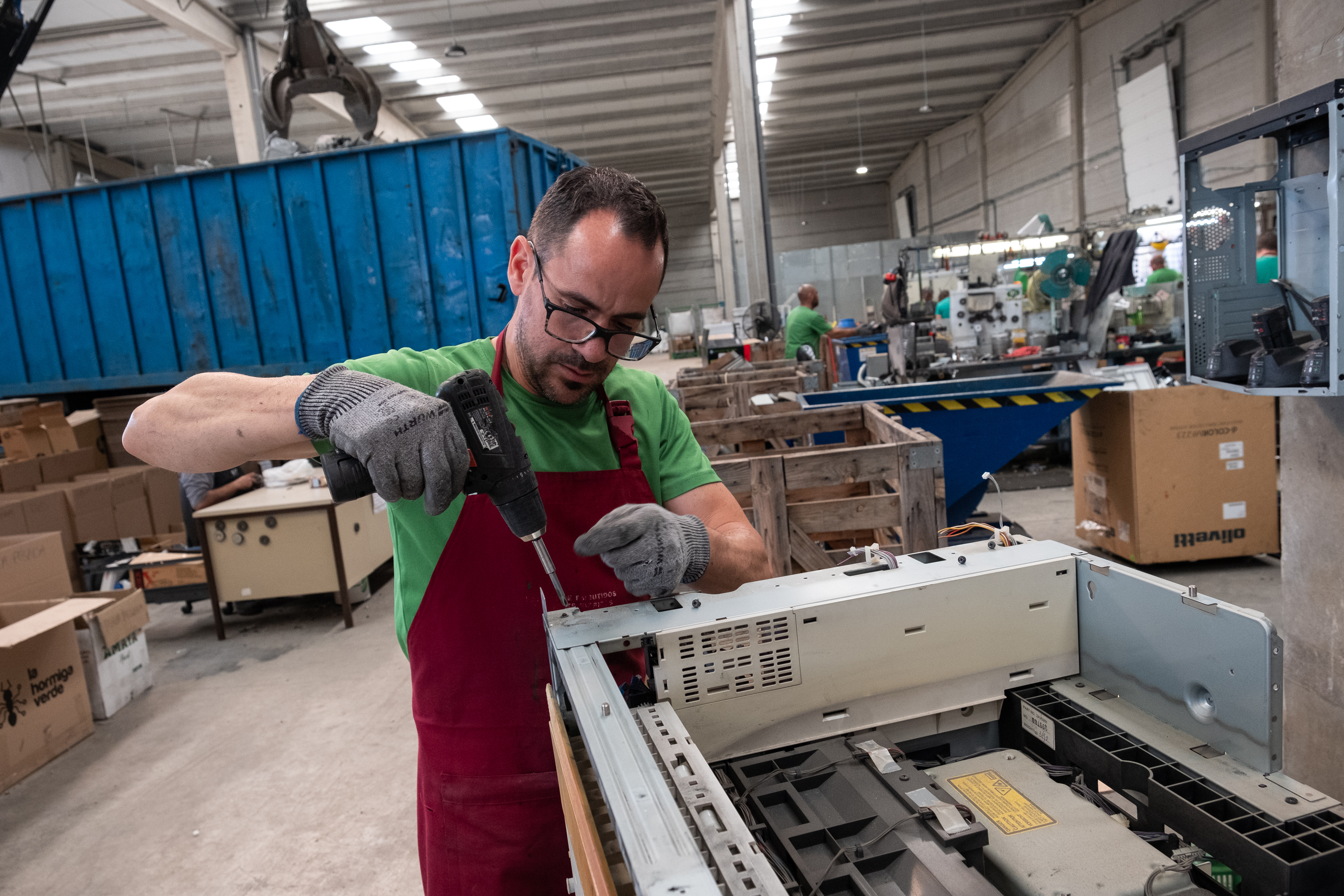 In La hormiga verde, a company located in Villafranca de los Barros (Badajoz), there is no concept of using and throwing away. This company born in 2018 is exclusively dedicated to the management of electronic waste, giving a second life to technological waste. If the prevailing model is to consume and discard, here they defend reducing and reusing, as explained by the industrial engineer and manager, Ignacio García, 50 years old: “We recover 100% of the raw materials of the devices”. García comes from the biomass sector and started the company when he was unemployed: “I started alone, dismantling devices, I wanted to learn before calling anyone.” In 2019 he requested a loan from the bank, hired 10 employees and had a turnover of 100,000 euros. Now the ant squad has a turnover of 900,000 euros and is made up of 31 people, of which 29 are disabled. They have clients in Madrid, Valencia, Seville and the Netherlands. García maintains that the success of a company does not belong to the owner but to his team: “My ideal business model combines environmentalism with social empathy.”

But undertaking is a path full of difficulties. García invested time and money without knowing if it would pay off: “I was worried that there would not be enough pots to collect, we started with 1,000 kilos a day and we are currently triple the number.” The main work dynamic is based on reconditioning computers, mobile phones and in general, extracting raw materials from any device to give it a second life on the market. In La hormiga verde they also repair solar panels of photovoltaic power plants and have taken their first steps manufacturing objects from waste. The manager, Ignacio García, assures that there is the great line of growth: “I want to develop plastic carpentry and manufacture chairs and benches for public spaces. The only thing missing is that the administrations support us ”.

According to the United Nations, in 2019 the electronic waste record was reached with 53.6 million tons in the world. The mismanagement of electronic waste, among which there are toxic elements that are not biodegradable, such as lead, arsenic or mercury, seriously threatens the environment and affects the health of citizens. Spain is at the bottom of Europe in recycling despite being one of those that produces the most scrap: almost one million tons per year, of which only 21% is recycled, well below the EU average ( 35%). José Ángel Parra is visually impaired, he arrived two years ago as coordinator and explains that they collect waste for free through their network of green microdots: “We put on sale the objects to which we give another life, from consoles, tablets, televisions … ”.

The recycling sector is a growing business and an opportunity for job creation, as stated by Vicente López, director of the Labor, Environment and Health Trade Union Institute: “It will attract a large part of the innovative effort in the coming decades and a basic element is the integration of the most vulnerable groups ”. The entrepreneur of La hormiga verde was clear that he wanted to highlight the social value but found difficulties, because, he says, there is a lack of pedagogy and normalization with disability. García appreciates the help provided by the Spanish Federation of People with Disabilities with which he found disabled people willing to work on his project, and with which he hopes to continue expanding the workforce in the coming years: “We function like a gear, helping each other as if we were family ”.

One of the keys to the business is the peer-to-peer relationship between workers regardless of the rank they occupy. A work accident left Sonia González Pulido, 44 ​​years old, with a 33% disability: “I joined in April but I am so comfortable that it seems that it will take much longer.” He used to work in social organizations before coming to Garcia’s company. Now he organizes the electronic waste collection routes and comments that the dignity that this job grants him shows that disability should not be seen as an impediment to job placement: “Where others see barriers, we see challenges.”