What does the agreement on the profession of midwife signed on Monday contain? 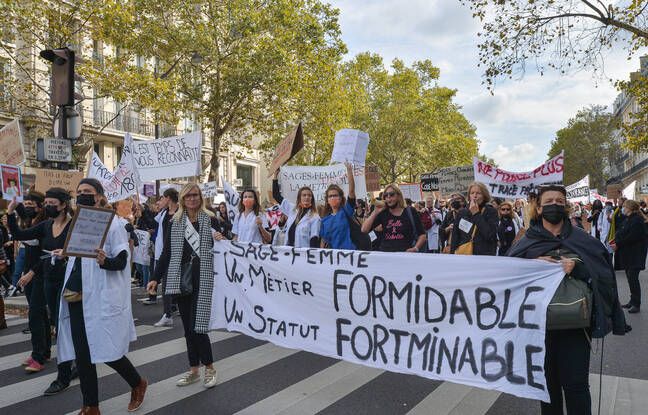 They hope to extinguish the anger in the maternity hospitals. After months of strikes and alerts, an agreement was reached to modify the conditions of exercise of the 23,000
French midwives. This Monday evening, Olivier Véran, Minister of Solidarity and Health,
Amélie De Montchalin, Minister of Transformation and Civil Service, and
Adrien Taquet, Secretary of State in charge of Children and Families, signed with representatives of the
French hospital federation (FHF) and three unions a new memorandum of understanding for midwives. The end of a long standoff?

A revaluation of 500 euros net per month

The text provides for three main measures. First of all, a significant salary increase: 500 euros net per month. But on closer inspection, the envelope takes into account the increase in the Ségur de la Santé (ie 183 euros), already planned and especially affected since December 2020.

In addition, midwives who work in the hospital, but also in the lucrative and non-profit private sector, will receive from February 2022 a medical practice premium of 240 euros per month, to which is added a revaluation of the grid of 78 euros net from March 2022. A boost that will not affect all midwives: those who belong to the territorial function and exercise in PMI “Will benefit from the revaluation of the grids, but not from the premium for medical exercise, which recognizes the specificity of the exercise in the hospital”, specifies the Ministry of Health. On the other hand, after negotiations, the contractual midwives who work in the hospital will receive the premium of 240 euros, but will not be affected by the revaluation of the salary scale. “The profession is characterized by a high rate of contractual workers: 20% in health establishments,” notes Olivier Véran’s entourage. Who insists: this is an unprecedented effort in terms of salaries, with an overall budget for this agreement estimated at 100 million euros.

“But the bonus of 240 euros will not enter into pension rights and it is subject to an attendance obligation, which means that a person on sick leave or on maternity leave will not touch it”, nuance Caroline Combot, deputy general secretary of theNational trade union organization of midwives (ONSSF). Who recalls: “the report of the General Inspectorate of Social Affairs (Igas) recommended an increase of 600 euros per month” for this profession.

A modification of the training

Second axis: career promotions should be more important today and in the coming years for midwives working in hospitals. “At the time of the Ségur de la Santé, we had gone from 11% to 22% of graduates [parmi les personnes pouvant bénéficier d’une promotion] for 2021, explains Olivier Véran’s firm. As part of the agreement, we will maintain this level at 22% in 2022, 2023 and 2024. ”In addition, an instruction on organizational and work issues (continuing training, HR management, promotion of physiological units within hospitals, etc.) should be published by the end of 2021.

The third project concerns all midwives and should change the profession in the long term. Initial training will be reduced from five to six years, a long-standing demand of the profession. At the same time, the decrees planned to launch the establishment of twelve new birth centers must be published by the end of November. Those allowing, within the framework of an experiment, to certain midwives to carry out voluntary instrumental terminations of pregnancy in a hospital will appear by the end of the year. Finally, the agreement provides for resuming discussions on promoting early post-natal maintenance. A meeting between the parents and a midwife, driven by the plan for the first 1,000 days, which makes it possible to return to childbirth and to support the first days as well as possible. And sometimes postpartum depression.

The account is not there for some union organizations

The signing of this agreement is timely since the strike movement, which has disrupted hospitals and clinics since the start of the school year, was to experience a new revival with a black weekend scheduled between November 26 and 29. “We want this agreement to mark the end of the current movement,” said Olivier Véran’s entourage. The signatory organizations will call for the end of this social movement. “

Three trade unions have in fact signed the new protocol: the French Democratic Confederation of Labor (CFDT), Force Ouvrière (FO) and the National Union of Autonomous Trade Unions (UNSA). On the other hand, “the CGT and CFTC do not agree and support our call to strike maintained for this weekend,” warns Caroline Combot, deputy secretary general of the National Union of Midwives. And the ONSSF warns: “If that is not enough, we will organize a black week from December 24 to 31”.

Why is the organization keeping the pressure on? “What blocks it is that we do not work on the bottom of the difficulty, namely the problem of maternity staff,” explains Caroline Combot. Giving more money to midwives is progress. But that’s not what will change the game. There is no going back on the perinatal decrees. These decrees, negotiated in 2019, were to define minimum numbers, make them mandatory and increase them. But the minister buried them. “However, the college of midwives has since made proposals for a gradual increase in staff, in order to avoid the obstacles linked to recruitment. We remain worried about the quality of care: today, we endanger women and children. A midwife who will receive 500 euros more, but who risks the medico-legal problem each time she is on call, will prefer a less stressful job. “

“It is not a balance of any account, but a new deal,” promises for its part the ministry, which says it does not close the door on the perinatal decrees. “We continue to work, but in a more peaceful way. “

Should we boycott the Beijing Olympics?