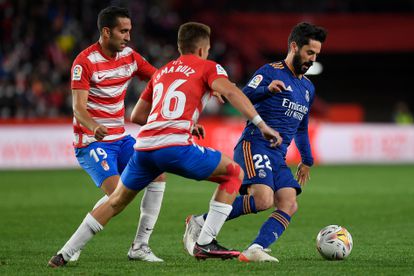 Isco, defended by Isma Ruiz and Montoro, this Sunday in Granada.JORGE GUERRERO (AFP)

It is now three years since one of the most accused and unforeseen crashes of an elite footballer in recent times: Isco. The man from Malaga still has five months to go until he reaches 30 years of age, but everything that he has revealed for a long time refers to a player off the hook for the great peaks, unable since the fall of 2018 to stop a steep fall that no one anticipated.

Around the midfielder there is already, in the best of cases, silence. In Granada, however, there was noise and confusion on account of his departure to the field in the 80th minute, with everything decided (1-4), due to his alleged refusal to continue warming up when he saw that Jovic and Camavinga were going to access the game and that he still had not touched. “We have thought about putting it a little later. He had already warmed up and has entered with the others [el serbio y el francés]”Carlo Ancelotti briefly pointed out in the press room. In the images, the coach is seen talking for a few seconds with his son Davide, his assistant, after seeing Isco go to the bench and, almost instantly, ordering the entry of the Andalusian instead of Modric. The club refused on Monday to comment on the reports that speak of the player’s anger.

The episode, the simple debate, does not suppose a substantial change in the case of the Malaga, but it does serve to add more precariousness to the crisis of a footballer who ends his contract next June and who, except for an unexpected turn, will have to face the vertigo of where Be placed. His salary of about six million has been an obstacle to finding a destination in recent transfer markets. Right now it occupies, at least, the sixth position in the order of priorities for the medullary. If already Valverde and Camavinga find great difficulties to have weight minutes before the formula of Casemiro-Kroos-Modric, Isco’s windows are reduced even more.

He had two titles in a row at the beginning of the campaign, with the injuries of Kroos and Modric, and was one of the emergency solutions in the Mestalla comeback, but his mark disappeared again. Between the back problems and the recovery of all the troops, between October and November only adds the 10 minutes of Granada. Intranscendental and, in addition, with controversy.

Holder in the thirteenth Champions League (2018), non-negotiable in the World Cup in Russia and a key part of Lopetegui’s brief project at the Bernabéu, the first explanations for his sudden blackout pointed to the bad relations with Santiago Solari between November 2018 and March 2019 Almost the last thing the Argentine did before being dismissed was to open a file and accuse him of not being in physical shape. However, coexistence with the following tenants on the bench has not resuscitated his football and the spotlight has only been directed at him for a long time, sheltered in silence and disappeared from the national team (it has not been going since June 2019).

Zidane, who had already definitively given him ownership in 17/18, satisfying the wishes of a part of the fans that had been claiming his figure to the detriment of Bale for a long time, closed the file on him as soon as he returned in March 2019 and placed him as start in four of the first five games. ZZ’s will to rescue was evident and during the following year, until the pandemic, the Malaga native was not short of opportunities, including days of great cartel. However, the gum also ended up breaking.

Last season he only played more minutes than Odriozola, Hazard, Mariano and Jovic. And in this, with an already highly devalued status, Ancelotti’s return gave him another window to escape the decline, but the balance so far is similar. When the Italian needed a relief against Levante and Betis, he went to him, but the Isco route quickly disappeared again.

This is his ninth season at the Bernabéu. He arrived at the age of 21 and was greeted one night in August 2013 as a hero in his first appearance against Betis (he scored the winning goal). It took him five years to gain ownership in a process that generated many frustrations. And when he got it, everything exploded. He was only 26 years old. Until today.

Hazard, also go down before the Sheriff

Eden Hazard will also miss this Wednesday’s match against the Sheriff (21.00, Movistar Champions League). He was out against Granada due to gastroenteritis and this Monday he trained inside the facilities with Gareth Bale. Finally, it did not enter the list. Neither did Fede Valverde, who exercised alone on the grass. If the deadlines are met, the Uruguayan is expected to join his teammates in Valdebebas this week.