The archives of anti-Franco worker and student organizations, those of the first conservationist and feminist groups in Spain, the documents of the pioneers in the vindication of the rights of homosexuals or of the movements of conscientious objectors against military service … All this could have a place in the newborn Historical Archive of Social Movements, created by the Ministry of Culture and which will have its headquarters in Alcalá de Henares (Madrid). However, after the lights of a supposed star measure that Minister Miquel Iceta wants to implement in a few months, associations of the archivist and documentary sector doubt that the project has the necessary money, means and personnel. This initiative was announced by the previous minister, José Manuel Rodríguez Uribes, in February of this year. However, relieved this in July, Iceta took the baton and in October the Council of Ministers approved the royal decree, published in the BOE of the 12th of that month, with which the file is launched.

The Secretary General for Culture and Sports, Víctor Francos, highlights that “it will be the first national archive, in this case dependent on the General Directorate of Fine Arts, to record social movements from the late Franco period, shortly before the Transition, until the beginning of the eighties, because it is the stage in which these types of organizations emerge ”. The 1985 heritage law considers documents older than 40 years “documentary heritage”. The papers that Culture expects to receive would belong to “entities, foundations and groups that have participated in the social and political transformation of Spain as we know it today,” adds Francos, who for now prefers not to name the organizations that have already been directed to the ministry. The royal decree emphasizes recovering the legacy “of the feminist movement” and of consumer associations.

Enrique Moradiellos, professor of Contemporary History at the University of Extremadura and a new member of the Royal Academy of History —read his speech on the 28th of this month—, trusts that the project will generate “an inertia that leads to contributing personal files and attracting donations ”. This historian affirms that “the concentration of archives generates synergies and facilitates the work of researchers”, which in this case may be “fundamental to understand the fault lines that caused the crisis of Francoism, especially workers and university students”, through their strikes, demonstrations and protests. 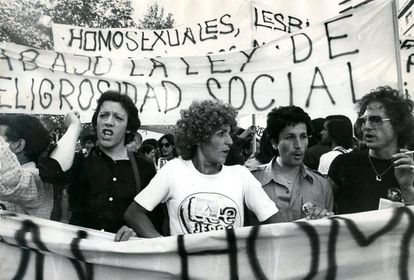 Henar Alonso, director of the Association of Spanish Archivists in Public Function (AEFP), which groups some 150 members, maintains that the idea does not seem bad to them, “but important aspects have been left unregulated in the royal decree.” His association, which defends public archives as guarantors of administrative transparency and citizen rights, calls for “a general law on archives that regulates all, public and private, to define issues such as access, and not a royal decree” . And he wonders: “Wouldn’t it have been better to incorporate the new documents into the General Administration Archive (AGA) or the National Historical Archive (AHN)? The agreement seems anti-technical to us, they have gone very quickly ”.

Alonso also highlights a fundamental issue for them. The royal decree establishes that the expenses generated by this new file “will be covered by the budget credits of the Ministry of Culture and Sports, without involving an increase in public spending.” “Thus it seems difficult to think that new documentary contributions are possible if an investment in new infrastructures is not contemplated,” he adds. This is corroborated by the president of the Spanish Society for Scientific Documentation and Information (Sedic), Yolanda de la Iglesia, who brings together professionals from the public and private sectors who manage the information: “The problem is the lack of financial resources. The files that already exist are the poor brother of information management in public administration. Without money is a proposal that creates a lot of uncertainty for us ”.

Furthermore, “the references to the personnel who will take care of these tasks are minimal”, adds Alonso, so for the AEFP “there is a lot of lack of definition; they wanted to be grandiose and hang the medal of a new center, which would be good to put money in, but not at zero cost ”. De la Iglesia points in the same direction: “There is a lot of precipitation in the proposals” and regrets “that there has not been much participation of the agents” of the sector in what was agreed by Culture. 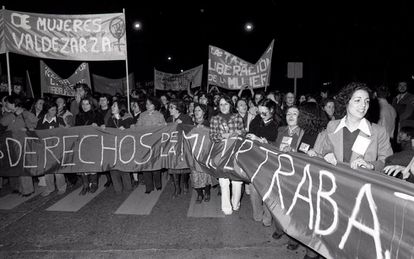 Demonstration in Madrid on International Women’s Day, March 8, 1978, under the slogan “For a job without discrimination.” Chema Conesa

Another but that Alonso puts is the one of the groups included in this file. “Why are the neighborhood associations not there, for example?” In this sense, Moradiellos underlines that “the accelerated urbanization of cities such as Madrid or Barcelona created a series of hygiene and health problems that led these types of groups to demand improvements”, with its consequent documentation. The historian opens the range more: “I would also include the Catholic labor organizations, which had a transversal importance.”

With today’s media, it is not worth moving funds from one file to another

Archivists Association in the Public Function

One of the organizations to which this file could concern is the National Labor Confederation (CNT), which brings together anarchist trade union groups. By email, Sònia Turón, president of the Anselmo Lorenzo Foundation, which guards the archive of this organization, wonders if the Archive will not be “a mixed bag to include any collective movement that has done something on a social level.” Turón defends the CNT archive that they house – another part is in the Institute of Social History, in Amsterdam – and considers that transferring it to that new center would dilute its weight.

Francos points out that “the idea is that agreements are made with the different entities, to develop a process that would end with the transfer of documentation to the Archive. We want to have everything in the same place because there are entities with difficulties to safeguard and preserve their own documentation ”.

That place will be a building of the University of Alcalá; In reality, it will take advantage of the one that already contains, for more than a decade, files of the labor movement, such as those of the Largo Caballero, Pablo Iglesias and Indalecio Prieto foundations, which, however, contain documents from the beginning of the 20th century, much earlier to the Franco regime. The rector of the Alcalaíno campus, José Vicente Saz, says that this institution will contribute “the space and its maintenance” to the Archive and that Culture will have to first communicate to them what documentation will arrive. “Then we will proceed to assess the state of the material, to organize it and that each document has a file to file. This way, it can be a useful research tool ”, he explains. However, Henar Alonso warns: “That building barely has the capacity to house new documentary income in its deposits.”

From the AEFP they also ask “what will happen to the documentation on social movements that is already in other centers, are they going to move to the new space, will copies be made…? Today, with the means that exist, it is not worth moving funds, what is needed is a website where everything is well digitized and can be consulted ”. Both archivist associations finally show their concern about the question of how the new funds will be accessed, because “there will be many private ones”. For De la Iglesia, the measure announced from the Ministry of “signing agreements with each entity or individual” is not the most objectionable part of the royal decree, “but it will be a very laborious task, with many issues to negotiate.” In any case, for Moradiellos the main thing would be that “all these documents can be preserved from the negligence of time because it destroys them.”