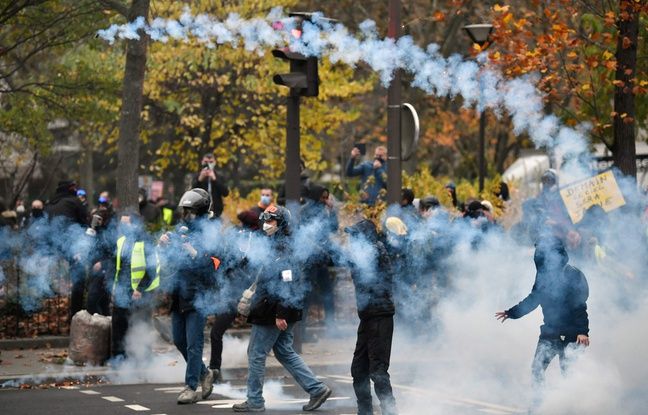 Three candles on a “season 3” sign to celebrate the 3rd anniversary of the movement, several hundred “yellow vests” demonstrated Saturday afternoon in Paris, between Bercy and Alésia. The “taxes”, the small pensions, the disconnection between the politicians and the daily life of the French: the traditional topics of the “yellow vests”, which “never let go”, were always present, mingling with others more current against the health pass. Another sign denounced “a country on the verge of overdose”.

Emblematic figure of “yellow vests”, Jérôme Rodrigues was present at the rally. “We are there because we think that the” yellow vests “will triumph,” assures Marie Huguet, 68, who came from Orléans and has been present since the first weeks of the movement. She denounces pell-mell “the most taxed country in the world”, “politics”, of which she “hates”, “politicians who do not know the problems of the French”. “We have been asking for the RIC from the start”, the citizens’ initiative referendum.

She is with her friend Georgette, who receives less than 1,000 euros in retirement per month. “They lowered our pensions! And the story of 100 euros is a stroke of bluff “, protests the latter about the” inflation allowance “of 100 euros promised to 38 million French people,” receiving less than 2,000 euros per month ” , according to the government.

On the sidelines of the demonstration, two people were taken into police custody as part of an investigation for contempt of person holding public authority, according to the Paris prosecutor’s office. This is, according to the police headquarters, the owner and driver of a pink food truck on which appeared a large drawing featuring in scabrous positions Joe Biden, Emmanuel Macron and the Paris police prefect, Didier Lallement , who lodged a complaint.