Maximilian of Habsburg and Charlotte: the unusual story of the last emperor of Mexico (and how his government was doomed from the start)

For some, he was the scapegoat for France’s expansionist ambitions. For others, he was nothing more than a usurper, placed on the throne of Mexico by another usurper – Napoleon III – to fulfill his imperialist project..

The truth is that the story of Maximiliano de Habsburgo and his wife Carlota, in the so-called Second Mexican Empire, was a tragic episode in the history of Mexico created on deep misunderstandings.

But what was it that led the Austrian archduke and the Belgian princess to accept the throne of a New World country? mired in deep divisions and conflicts?

And why did Mexicans decide at that point in their history that they could not govern themselves and agreed to be led by an unknown foreign aristocrat?

Mexico: a “country on fire”

In May 1864, when Maximiliano landed in the port of Veracruz, he arrived in a deeply divided and unstable country.

Four decades had passed since independence from Spain and throughout that period the newly formed sovereign nation had been mired in years of deep crisis and divisions, as Héctor Zagal, a philosophy professor at the Universidad Panamericana, explains to BBC Mundo.

“By 1864 Mexico had lost half of its territory in war with the United States, it had had more than 27 presidents and most of them had not finished their mandate.”

“Mexico had had a coup, revolutions and finally a very bloody civil war. And it was also literally bankrupt,” adds the also author of the novel “Empire”, which deals with the last days of Maximiliano.

This bloody civil war, the War of the Reform (1858 to 1861), pitted the two large groups that divided the country: liberals and conservatives.

The bloody conflict ended with the defeat of the Conservatives and with Benito Juárez, the leader of the Liberals, as president of the country.

With the country in bankruptcy, President Juárez decides to suspend the payment of the foreign debt and the measure provokes the intervention of the most affected countries: Spain, France and the United Kingdom, which in 1862 sent armed expeditions to Veracruz.

Both Spain and the United Kingdom reach an agreement with Juárez and withdraw their troops. But France, under the reign of Napoleon III, orders his army to advance towards the capital.

As professor Erika Pani of the Centro de Estudios Históricos del Colegio de México explains, the suspension of payments on Mexico’s debt is an “ideal excuse” for the expansionist ambitions of Napoleon III.

“The United States is totally consumed by its civil war (the Civil War), and Napoleon III sees his old dream of restoring the French presence in the American continent and of putting a dam on Anglo-Saxon expansionism,” explains the historian.

In addition, the Mexican conservatives, who had fought and lost against the liberals, ask France for help to restore their former privileges and promote the establishment of a second empire in Mexico.

“And so, Napoleon III listens to the Mexican conservatives who want the salvation of the country to come from outside,” Erika Pani tells BBC Mundo.

“They decide that, as the republic has not worked in Mexico, we must return to the monarchical government, which they believe is finally going to bring order to the country.” 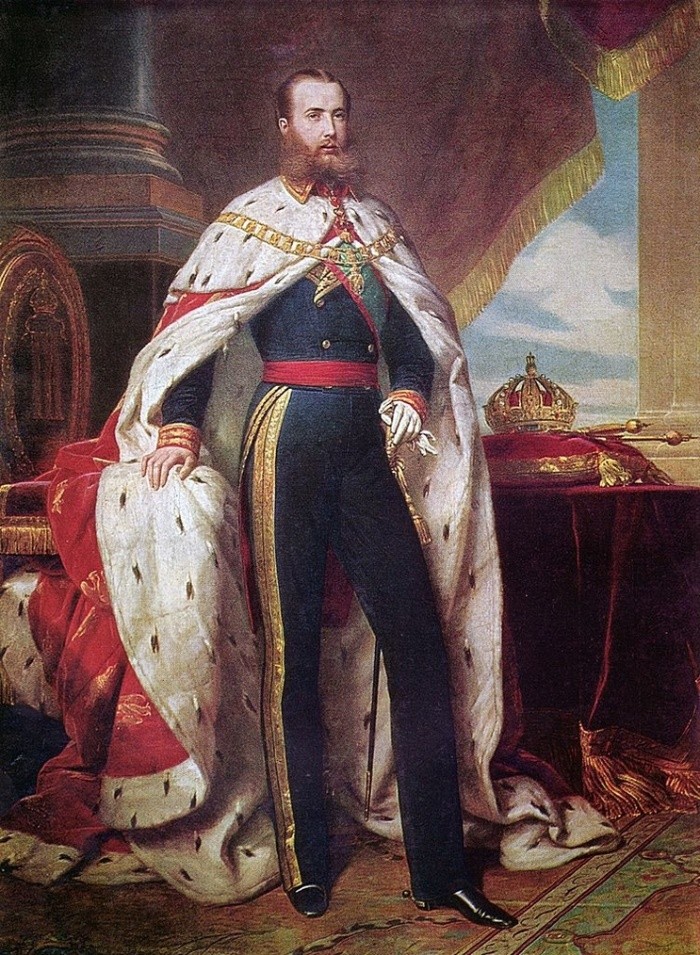 French troops occupy the Mexican capital in 1863, and Juárez and his cabinet flee to the north of the country to try to establish a strategy to retake power.

With the defeat of the republic, the Mexican conservatives see the opportunity to reinstate the monarchy with a European aristocrat that allows them to regain power and eliminate liberal reform laws.

Napoleon III, who wanted to strengthen ties with Austria, thinks that Maximilian of Habsburg, the brother of the Austrian emperor, Francisco José, is the ideal candidate to occupy the throne of Mexico.

Mexican conservatives support Napoleon III’s proposal, and a commission travels to Trieste to offer the archduke the crown of Mexico.

“The Mexican monarchists considered Maximiliano as the ideal person to safeguard their interests: he was a young Catholic prince, married to a daughter of King Leopoldo of Belgium, also a Catholic nation and of great influence in international politics,” explains anthropologist Gloria Delgado de Cantú in his book “History of Mexico, historical legacy and recent past”.

“For this reason, they trusted that the archdukes would restore to the Mexican clergy the privileges that Juarista liberalism had taken away from them,” he adds.

And so, on May 28, 1864, Maximiliano and Carlota disembarked in the port of Veracruz, and the Second Empire of Mexico began. 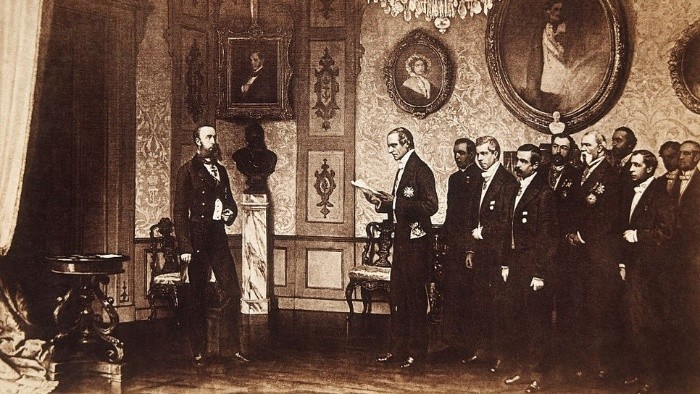 A commission of Mexican conservatives travels to Trieste in 1863 to offer Maximiliano de Habsburgo the crown of Mexico. GETTY IMAGES

Maximiliano remains dependent on the support of France, which had considered the Mexican project as a colonial adventure, explains Héctor Zagal.

“This second empire was supported by French troops who were occupying an important part of Mexico.”

“And offering the crown to Maximilian of Habsburg what it really suggests is that he is going to be like a puppet of Napoleon III,” he adds.

In a short time Maximiliano began to become disillusioned and to lose the support of the conservatives who had brought him to power.

The emperor decided that he would not return the goods they had expropriated the church after the Reform Laws.

He also defended several of the political ideas proposed by the liberals during the Juárez administration: agrarian reforms, freedom of religion, and the extension of the right to vote.

He restricted the hours of work and abolished the work of minors and took an interest in the living conditions of the indigenous people on the estates of the large landowners.

He soon won the rejection of all: from the conservatives and the clergy, who saw him as a traitor, and from the liberals, who had always considered him an invader.

And he also never managed to obtain the support of the rest of his Mexican subjects.

“Maximiliano was a man of little character. Very bad for numbers. An emperor who spends a lot of money on works, undoubtedly beautiful, such as the remodeling of the Chapultepec Castle, or the Avenida de los Emperadores (now Avenida Reforma), but that he does not realize that the empire was financially unviable, “explains the professor at the Universidad Panamericana.

“He tried to become Mexican: he dresses as a charro, learns Spanish, tries to attract the sympathy of indigenous communities and sometimes he succeeds.”

“But at the end of the day, and Carlota reminds him of that in a letter, he was a foreign prince whose strength rested fundamentally on the French troops,” adds Héctor Zagal. 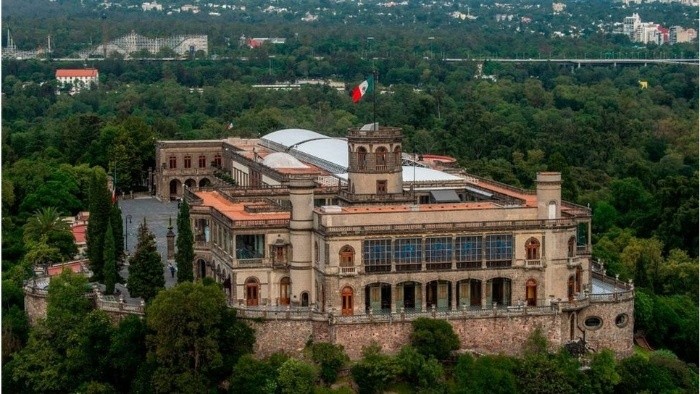 Maximiliano remodeled the Castle of Chapultepec, in Mexico City, to make it his residence. GETTY IMAGES

By 1865, after the American civil war ended, President Andrew Johnson, invoking the Monroe Doctrine, opposes the presence of France in Mexico and exerts increasing pressure for Napoleon III to withdraw his troops from the country.

And France, occupied in a warlike conflict with Prussia, withdraws its army from Mexican lands.

While the French troops withdrew, Juárez and his liberal soldiers advanced towards the capital and regained control of the country in 1866.

Carlota travels to Europe seeking the support of Napoleon III and Pope Pius IX, who firmly refuse to help.

Maximiliano, already without the support of the French, tries to abdicate but his family convinces him otherwise.

“A Habsburg never abdicates, under any circumstances,” his mother, Sophia of Bavaria, tells him in a letter.

“In the end, without the support of the French, the empire ends up falling like a house of cards that perhaps leaves a romantic vision, behind which there is a lot of blood,” says Héctor Zagal.

Thus, three years after having embarked on his Mexican adventure, Maximiliano is arrested and shot in May 1867, with what remains sealed the triumph of the liberal republic in Mexico. 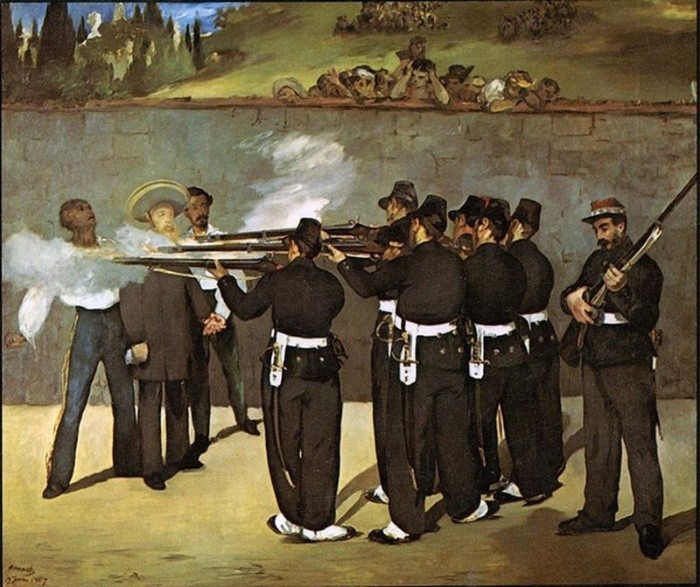 Edouard Manet immortalized the execution of Maximilian with a series of paintings entitled “The Execution of the Emperor Maximilian.” UNIVERSALIMAGESGROUP

This tragic end, historians agree, has led to idealizing the figures of Maximiliano and Carlota, which continue to cause fascination more than 150 years later.

But what did this episode in history leave for Mexico?

“In Mexico there were a series of invasions, like the American one (1846 to 1848), which was so serious that some thought that the country could be lost,” explains Héctor Zagal.

“After the Second Empire, the experience of the Republic is restored and the confidence is generated that Mexico will be independent and it will not be a colony or protectorate of another country “.

“Because Mexico could have become a protectorate, like countries like India, which in the 19th century ended up being colonies or protectorates,” adds the author of “Empire.”

And the teacher at the Colegio de México, Erika Pani, agrees.

“I believe that the overwhelming republican victory, against the empire and a European power, undoubtedly consolidates the sense of nation and links the republic and the Constitution with the homeland.”

“But also, by getting rid of these characters -which are very colorful- (the message is) this is what happens to those who come to conquer Mexico. Mexico eliminates them. Europe, European powers: do not believe that Mexico is a field of colonization, “says the historian.

‘What many continue to wonder, even 154 years later, is why these European enlightened princes agree to come to a country so divided and mired in conflict?

Some historians believe that it was Carlota’s ambitions that prompted Maximiliano to accept the crown of Mexico.

But the historians consulted by BBC Mundo believe that the reason was both naivety and ignorance of the situation in Mexico.

“We keep letters that show that Maximiliano thought that coming to Mexico would be the same as staying in Miramar (his castle in Trieste), collecting insects and furniture, sailing, building terraces”, affirms the professor of the Universidad Panamericana Héctor Zagal.

“And he comes to Mexico with this dream of building a castle in the European way over an old Mexican castle, when the country is at war, burning and impoverished. I think it was enough to know a little more about the history of the country.”

Maximiliano and Carlota had been viceroys of Lombardy and Veneto. But when Austria loses the provinces, the archdukes remain an official position and must return to Miramar.

“I think they are extremely bored in Miramar and they bet on the (Mexican) adventure,” says Erika Pani.

“But there is also his youth. Maximiliano is a second prince who arrives in Mexico at the age of 27. This youth could explain why he has been so ineffective,” says the teacher at the Colegio de México.

“Perhaps there is also the fact that he did not know the Mexican reality, which was really a very complex situation. This perhaps contributes to his saying yes, because he does not know that he is getting into an eleven-rod shirt from which it was practically impossible to get out” .

Now you can receive notifications from BBC News Mundo. Download our app and activate them so you don’t miss our best content.