Cleaning up the mess after the riots: ‘My Rotterdam heart is crying’ 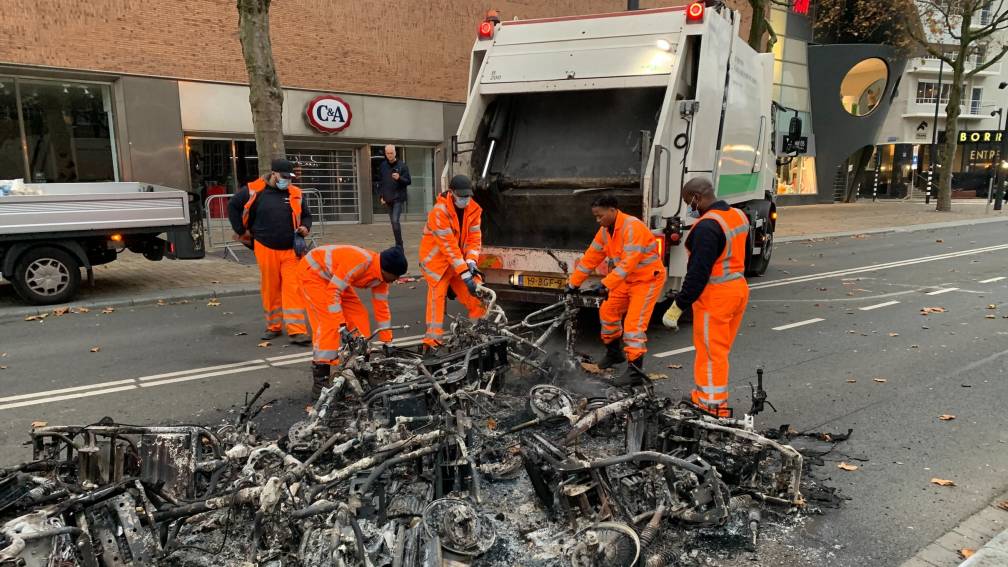 The traces of the riots last night are still visible in the center of Rotterdam in the early morning. “It is really a mess around the burned-out police car,” says NOS reporter Marc Hamer. “There you see traffic signs pulled out of the ground, broken glass, stones, bicycles: everything.”

The sweeping teams appear around 8 a.m. to clean the Coolsingel again. They throw the burned-out scooters, bicycles and other debris into a garbage truck. Halfway through the morning, the biggest mess is cleared up.

A passer-by describes the situation as a mess. “Demonstrating is fine, but ranting like that has nothing to do with it. And that in our city. I am ashamed as a Rotterdammer.”

At least seven people were injured. An unknown part of them has been hit by police bullets. “They should have targeted even more,” says the Rotterdammer.

Hundreds of rioters attacked the many officers who had been deployed to restore public order, police said. Scooters and cars were set on fire and stones and fireworks were thrown at officers. Public properties were also destroyed, but there is no overview of the damage yet. Dozens of people have been arrested.

Around 07:00 am Hamer on the Coolsingel hears the sound of beeping alarm systems at several stores. The side of a catering building is blackened. Photos show that windows of shops have been broken.

‘This is pure demolition’

“I think it’s outrageous that this is happening,” says a woman who walks by. “This has nothing to do with 2G,” she refers to the cabinet plan to only allow vaccinated or people who have recovered from corona access in some busy places. “This is purely going out on the street and deliberately demolishing stuff that belongs to someone else.”

Another woman says: “I would have enjoyed sitting on that bench there. Now it is in disarray. I think the people of Rotterdam are not proud of what has happened here. I am ashamed, this sucks.”

There has also been a bewildered response from politicians to the riots in Rotterdam. Think MP Kuzu writes on Twitter: “My Rotterdam heart is crying. You keep your hands off the police, you are not going to set fire to police cars and destroy other people’s property because you are angry with the cabinet.”

GroenLinks MP Ellemeet calls the violence “absolutely unacceptable”. Volt MP Gundogan says he is speechless and shaken. “It is with a heavy heart that I see images of brutal violence against police officers in Rotterdam,” tweets SGP party chairman Van der Staaij.

Dutch actor Olivier Richters has a role in Indiana Jones 5

“The Touquet agreements allow London to evade its duty of asylum. Brexit has made them obsolete ”

“The Touquet agreements allow London to evade its duty of asylum. Brexit has made them obsolete ”