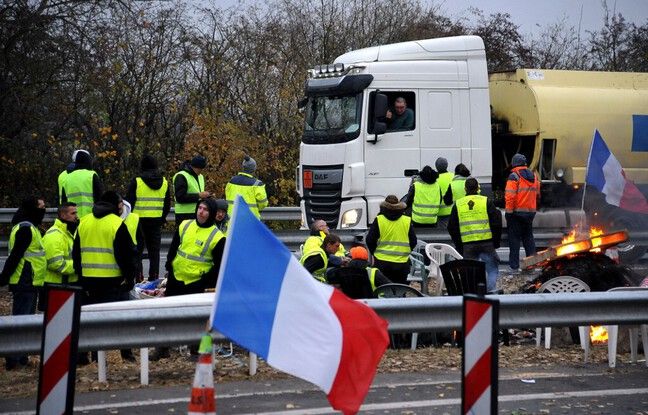 Three years ago, on Saturday November 17, 2018, the movement of “yellow vests” took to the streets for the first time, invaded roundabouts and demonstrated across the country to protest against the increase in the price of fuel. . According to the Ministry of the Interior, 287,710 people marched during this “act” I.

36 months, the coronavirus and a still high gasoline price later, the movement seems to be dead, the health crisis having replaced the social crisis. The roundabouts are no longer occupied, the streets no longer catch fire during the demonstrations. 20 Minutes contacted former “yellow vests” to understand the reasons for their abandonment.

Much more than weariness, time or the desire to do something else, it is police violence that is put forward as the main cause of this abandonment of the yellow vest. This is particularly the case with Emmanuelle, 49, “no longer mobilized around the movement. The repression is too violent. “Same observation with Cyril, 25 years old:” During a demonstration, I was hit and then arrested at Place de la Bastille. I was sentenced to a 1,200 euros fine instead of the 3 months in prison required for participating in a grouping with a view to committing degradation. Since then, I have not taken part in a demonstration at all because the fear of repression is far too strong. I was the only one participating in the demonstrations, because 99% of those around me were afraid of violence. “

The same goes for Frédéric, in solidarity with the movement but who no longer goes on the ground, “for a single reason, not to come back from a demonstration with physical after-effects when I am not part of a minority which puts the bazaar ”.

Another reason for desertion mentioned, the impression of fighting in a vacuum against a government that does not want to make concessions. Emmanuelle draws up the vain observation of her months of struggle: “The government did not listen to any of the demands, did not understand anything about the movement. “An even more angry mood in Frédéric, who declaims:” France is no longer a Republic but a state where only the right to agree with the majority is tolerated. “

Finally, a more or less important disagreement with the movement or a part of it also explains some of the departures. Christiane, 65, indicates that she quickly stopped the demonstrations because of demands that she found “average”: “Asking for the elimination of wage charges? ! Yes, and suddenly, we find ourselves without Social Security and with ridiculous unemployment. Rather, we should have asked for real increases ”. Charles, 73, regrets that the movement has “quickly become exasperating by the behavior of the leaders and by the demonstrations which led to thugs. Small traders have paid the price. “

Demobilized, most nevertheless recognize that most of the things that revolted them yesterday are still there today. “We demonstrated for nothing, because nothing has changed. It’s even worse than before for the price of diesel, EDF, water, taxes for the house, etc. », Deplores Christian, 68 years old. Sarah, 25, admits that “life is still tough financially. On the other hand, I support all those who are still yellow vests and who are fighting for a better life. “

If some say they are ready to put on a yellow vest or participate again in a great national movement, many have turned to an alternative to obtain the improvements they once demanded in the streets: the presidential election of 2022. Emmanuelle: “L ‘ Next year, there will be new elections, I expect a change from that side. “Cyril concludes:” Today, we still support the ideas and the battle, but we prefer to continue working and voting to change things. “