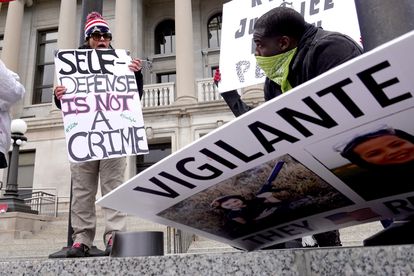 Protesters for and against Kyle Rittenhouse at the entrance to the Kenosha (Wisconsin) court. SCOTT OLSON (AFP)

The jury in the Kyle Rittenhouse case reached a unanimous verdict this Friday: the 18-year-old has been found not guilty of the five charges that weighed on him, including murder. Hearing the fifth count of not guilty, the teenager began to shake and collapsed, he had to sit up and hold on to the chair in order to regain his form. She was shaking and didn’t cry but it was hard to catch her breath. Behind her, her family showed their satisfaction, in silence. Judge Bruce Schroeder warned that there could be no reaction whatever the verdict was. “As you can see, there are many forces of order in here,” he warned.

After four days of deliberation, a verdict was eagerly awaited. The most agonizing part of the process had been entered: waiting. Four days in which even the NBC television network was barred from entering the courtroom after the judge accused them of following a member of the jury with a van to obtain more information. There is no possibility of appeal. Rittenhouse is from today a free man.

The judge let the members of the jury march on Monday night with a phrase that weighed like a stone: “The resolution of this case remains on your shoulders.” After eight days of trial and more than 30 witnesses, five men and seven women had to rule on the innocence or guilt of Kyle Rittenhouse, the 18-year-old accused of killing two people and wounding a third on the night of 25 December. August 2020, when the city of Kenosha (Wisconsin) lived its third day of protests against police violence.

With the jury withdrawn from its deliberations, the courtroom regained its lost composure on Tuesday with the dramatic testimonies that have taken place during the trial. Meanwhile, on the outskirts of the city of Kenosha, the Governor of the State, Tony Evers, had ordered the deployment of 500 members of the National Guard to guarantee public safety in the face of the possibility of riots, depending on the final verdict.

The 12 men and women had to agree, unanimously and beyond any reasonable doubt, if the then 17-year-old Kyle Rittenhouse committed first-degree murder using a dangerous weapon in the death of 36-year-old Joseph Rosenbaum; Reckless murder in the first degree by killing Anthony Huber, 26, and premeditated murder by wounding Gaige Grosskreutz, 26. The critical minutes of that night in which two people were killed by bullets from an AR-15 semiautomatic assault rifle were videotaped by a passerby. During the hearing, the prosecution also repeatedly showed images belonging to drones that collected the facts and in which the death could be seen live.

Protests over the police shooting that paralyzed Jacob Blake entered their third day of unrest at a time when the country, following the brutal death of George Floyd at the hands of a policeman, was experiencing its most violent summer since the protests by civil rights of the sixties. It was then that Rittenhouse decided to travel the little more than 30 kilometers by car that separate his home in Antioch (Illinois) from neighboring Kenosha (Wisconsin) and that sentenced his life. There are hundreds of images. In them, a young man, then 17 years old, with the face of a child, is seen walking the streets of the city on the shores of Lake Michigan carrying an assault rifle on his shoulder. For the prosecution, Rittenhouse acted as a vigilante seeking revenge against looters and protesters protesting against the police. For the young man’s lawyers, Rittenhouse turned to Kenosha in an act of patriotism to help his community and was forced, in order to defend his life, to fatally shoot Rosenbaum and Huber and wound Grosskreutz.

Once again in the United States, the Kenosha trial was not limited to just one man and his alleged crimes. Once again, the idiosyncrasy of a nation has been exposed that makes it routine for both the prosecutor and the defense attorney to display the star test piece of the trial, an assault rifle, and pose with it to prove their thesis. An idiosyncrasy that allows the charge of illegal possession of a firearm in the hands of a 17-year-old boy to be dropped because an old law of the State of Wisconsin allows the possession of weapons of a certain size, and the AR-15 complies with that requirement.

As the days of the trial passed, tempers grew tense. When the defendant took the stand to testify and prove that he acted in self-defense, the prosecutors subjected him to a harsh interrogation for hours. The judge, Bruce Schroeder, who has played a perhaps too leading role in this process, repeatedly admonished the prosecution and went so far as to do so by raising his voice. That same judge is the one who did not even accept the use of the word “victims” to refer to the deceased, arguing that it was not clear whether they were in fact a threat to which the young accused had no other option but to respond.

In the final stretch, the day that Rittenhouse left the dock to take the stand, anyone who wanted to connect with a television network could see an 18-year-old collapse during his statement. Broken by tears, Rittenhouse could barely finish his testimony. Finally the judge opted for a recess.

For Deputy District Attorney Thomas Binger, that moment of the teenager’s weakness when recalling what happened was further proof that Rittenhouse had shown no mercy to his victims and was aware that he shot to kill. “Even on the witness stand, when he breaks down and cries, he’s doing it for himself, not for any of the people he hurt that night,” Binger said. “He does not show regret, he does not care about anyone other than him,” said the lawyer.

The prosecutor went even further in his strategy of dismantling the theory of self-defense by looking directly at the jury and telling them that when deciding the verdict they should “take into account that the accused caused the incident” because, according to the law in force in the state of Wisconsin, “you cannot claim self-defense against a danger that you create yourself.” In one of the most theatrical moments, Binger seized Rittenhouse’s semiautomatic rifle and staged the way the teenager held and pointed the gun at Rosenbaum, Huber and finally Grosskreutz.