When a person dives into the beach and swallows water, it is very likely that they have inadvertently downed a Oikopleura dioica, an animal of barely three millimeters that is everywhere in the temperate seas. The biologist’s team Cristian Cañestro He raises them in his laboratory at the University of Barcelona, ​​because it is a little bug that hides many secrets about what a person really is. These scientists have just revealed that Oikopleura and his relatives “massively” lost the genes necessary to form a human heart, a discovery that raises many far-reaching questions. His finding is so important that it is published this Wednesday on the cover of the magazine Nature, the temple of world science.

In the collective imagination, life emerged in microscopic forms and evolved, gaining complexity, until it reached the peak: the human being, directly created by a god, according to a multitude of incompatible religions. Cañestro’s group draws a very different scenario. Biologist quotes the famous deconstructed potato omelette by Ferran Adrià, in which the chef analyzed the essential flavors of the traditional dish to create an unrecognizable reinterpretation within a cocktail glass. “Deconstruction is a method of analysis, born in philosophy, that we are applying in biology. By analyzing the parts separately, you end up understanding the whole better, ”explains Cañestro.

The heart of Oikopleura It only has six cells, the beats of which keep the animal alive. The unique organism belongs to the tunicates, the sister group of vertebrates. If you imagine evolution as a road, tunicates and vertebrates walked together until their steps parted about 500 million years ago. Their common ancestor had a multitude of genes that are essential today to form a human heart, but the genetic analysis of the Oikopleura shows a massive loss of these genes along the way. 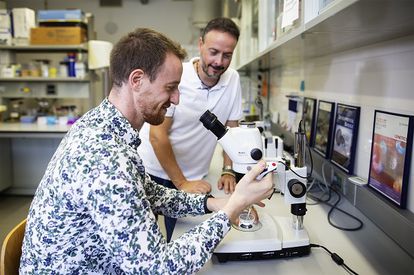 Alfonso Ferrández, at the microscope, and Cristian Cañestro, at the University of Barcelona.

Cañestro and his colleague Ricard Albalat are world specialists in investigating the loss of genes as the engine of evolution. The researchers believe that the ancestral form of the tunicates was sedentary, fixed to the seabed, and not a swimming animal as previously thought. Losing the genes necessary for a more sophisticated heart would have allowed the Oikopleura accelerate its development and have a simple cardiac organ in just a few hours, which facilitated its jump to free life, floating in the ocean.

When contemplating a 20th century telephone, an ignorant observer might think that these devices require a cable as an essential feature. When you see a cell phone of the 21st century, the concept of a telephone changes radically. The same is true of living things. See the missing genetic pieces in the Oikopleura allows us to understand which are the essentials to form an animal with a mouth, brain and heart. The deconstructed omelette of life. Mutations could be hidden in these fundamental genes that explain why, for example, so many athletes suffer sudden death for no known cause, according to Cañestro hypothesized.

The biologist recalls that, in 2014, La Marató de TV3 – a Catalan television event to raise funds for charity – was dedicated to heart disease. As his laboratory was short of money, something common in groups that do basic research in Spain, Cañestro presented an idea to La Marató de TV3, which he had gathered more than 10 million euros. The project consisted of studying the genetic bases of human heart diseases with the Oikopleura. They didn’t give him a coin, but the plan was so good that it ended up on the cover of Nature.

The new study is part of the geneticist’s doctoral thesis Alfonso Ferrandez. The team from the University of Barcelona made a plea in favor of basic research this Wednesday at a press conference at the Faculty of Biology. Cañestro denounces the shortage and delay of public funds and the precariousness suffered, above all, by young scientists in public universities. “It’s a shame,” he says.

The biologist recalls that Francis Mojica, a modest researcher at the University of Alicante, spent years and years studying practically alone the molecular mechanisms of the microbes that were capable of living in the extremely salty pools of the Santa Pola salt flats. Without any application in mind, he discovered that microorganisms possessed a system to precisely cut DNA. Thus was born the CRISPR revolution, a technique that in recent years has made it possible to rewrite the DNA of living beings, including humans, and promises to save millions of lives and generate billions of euros. “We have to cry out for the improvement of conditions in the public university,” claims Cañestro.

QAnon Bison Sentenced to Jail for Assault on Capitol in January; this is the time you will spend in jail

9N: the feminist march that persecutes the AMLO government

9N: the feminist march that persecutes the AMLO government