Protests continue in Bolivia despite the president giving in to pressure 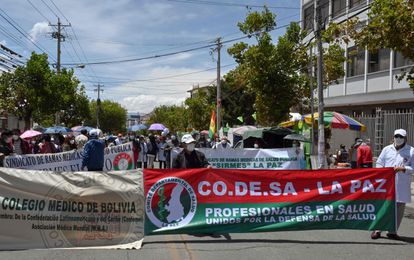 Protests in La Paz against the Government of Luis Arce.AIZAR RALDES (AFP)

Bolivian President Luis Arce asked Parliament last weekend to repeal a law with the aim of containing the strike and the protests that have been pressing him since November 8. The Legislative Assembly began the process on Monday. However, this has not succeeded in fully demobilizing the opponents. Unemployment continues, although in a more lax way, in three regions of the nine of the country. The alliance of unions and civic (regional) groups that leads it also demands the withdrawal of other laws and that the requirement of a two-thirds majority be reinstated for some parliamentary decisions.

“We, listening to the demands of the Bolivian people, have made the decision to repeal Law 1386, in order to pave the way, so that there is no greater pretext to continue mistreating and paralyzing our damaged economy,” Arce said on television. He explained that this law, which established the Bolivian strategy against the legitimization of illicit profits (or money laundering), “was disturbing certain sectors,” in particular entrepreneurs in the informal (or black) sector of the economy, merchants, cooperative transporters and miners. He claimed that, at the same time, it was being used by opponents to destabilize the government.

Several unions that were involved in the conflict announced that they would suspend their pressure measures when the repeal process was concluded. On the other hand, the citizens of Santa Cruz, Potosí and Tarija, the regions in which the strike has felt more forceful, want to obtain other government concessions. “We could have lifted the strike, but the Bolivian people have woken up and are calling for the total repeal of the package of laws. We have to resist, we are playing our last card of freedom and democracy, ”the president of the Pro Santa Cruz Civic Committee, Rómulo Calvo, harangued at a neighborhood rally. The “package of laws” he referred to includes the main norms approved by the legislature in the Arce period, which, according to the opposition, are a threat to private property, the autonomy of the regions and democratic freedoms.

Civics are also demanding that the obligation to gather two-thirds of the votes in the Chamber of Deputies and the Senate be restored to activate certain debate procedures and make decisions such as military promotions and the appointment of ambassadors. This requirement was eliminated in the last days of the previous legislature, in October 2020, when the ruling Movement for Socialism already knew that in the next legislature it would lose the two-thirds majority that it had had until then.

For the ruling party, none of the disputed laws, not even the one that will be repealed, affects the constitutional guarantees of property and political freedom, nor does it undermine the autonomous powers of the regions. In the government’s interpretation, opponents take advantage of their control of the mainstream media to disseminate false news in order to unsettle people, take them to the streets and create the same political conditions that framed the overthrow of Evo Morales in November 2019 . “Distrust is installed by the traumas of what happened in 2019. The opposition sees everything the government does as dangerous for democracy and the government thinks that the opposition is only acting to repeat a coup,” says analyst Armando Ortuño.

“Everything has its limits. Do not arouse the wrath of the Inca. When the people rise up there is no one to stop us, and we are going to rise up to defend democracy ”reacted the indigenous vice president David Choquehuanca after learning that the civic committees would continue with the mobilizations despite the abrogation of the law. The expression gave rise to all kinds of memes and jokes, some racist, on social networks, and an angry response from Santa Cruz. At the civic council on Sunday night, an evangelical pastor exclaimed: “We are not afraid of the wrath of the Inca, you, Vice President, fear the wrath of God.”

In cities that continue to strike, activities are stopped and reactivated episodically, following orders from civic committees to allow homes to rest and replenish. Ortuño believes that “there is no need to dramatize” the situation, which is far from resembling the crisis of 2019. Most of the other demands of the civic will hardly mobilize social sectors for specific objectives. The exception is a law that is being interpreted by public universities as contrary to their autonomy and their budget. This rule could motivate the next round of the fight between Arce and his adversaries. Some analysts point out that the president’s retreat from his first serious confrontation with the forces that were behind his party’s downfall two years ago presents his government as weak and may lead a triumphant opposition to bet stronger in the future.