A guitar sent into space, the new poetic performance by musician Kwoon

If some are already nostalgic for the photos taken by the favorite French astronaut, Thomas Pesquet, during his last trip aboard the ISS, here is a new performance that will plunge their heads back into the stars. A strange project has germinated in the head of the Breton musician Kwoon – Sandy Lavallart of his real name. What if to accompany his “soaring” music, he managed to make his guitar fly above the clouds?

Neither one nor two, after a year of hard work, the dream has come true. On October 24, the artist hung an ultra-light guitar – specially designed for the occasion – to a helium balloon that flew over the bay of Quiberon, in Brittany. This poetic and vertiginous journey, at an altitude of 31,000 meters, was filmed live thanks to an on-board camera, then unveiled on his YouTube channel on November 10.

The artist is not at his first attempt, he is used to “live” performances in spectacular places. In 2021, he was playing at the top of the Aiguille du Triolet at an altitude of 3,870 meters, in previous years, it was on the sides of a volcano with Canary Islands, or at Tévennec lighthouse in Brittany. Always alone, with his pedals, his guitar, his video device and a grandiose landscape to dream of the sound of his music.

The musician is inspired by these places to enrich his creativity: “I choose a spot, I create a musical atmosphere that corresponds to it, and once there, I rearrange the piece. I immerse myself, I watch, I observe, and then I send, ”he explains. 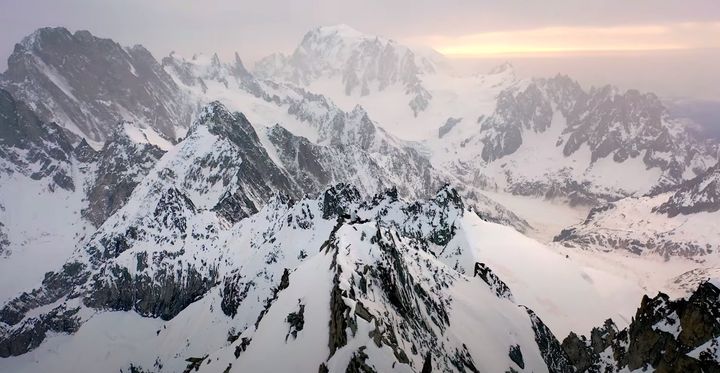 The artist Kwoon during his performance in March at the Aiguille du Triolet, in the Mont-Blanc massif. (Kwoon)

Kwoon is already aiming for an even crazier project, to be the first to play on the Moon. To achieve this, the artist invite to share their video on behalf of the French astronaut Thomas Pesquet and that of the multimillionaire engineer Elon Musk, owner of the company specializing in aerospace, Space X.