‘The shortage of air traffic controllers is the fault of ProRail’ 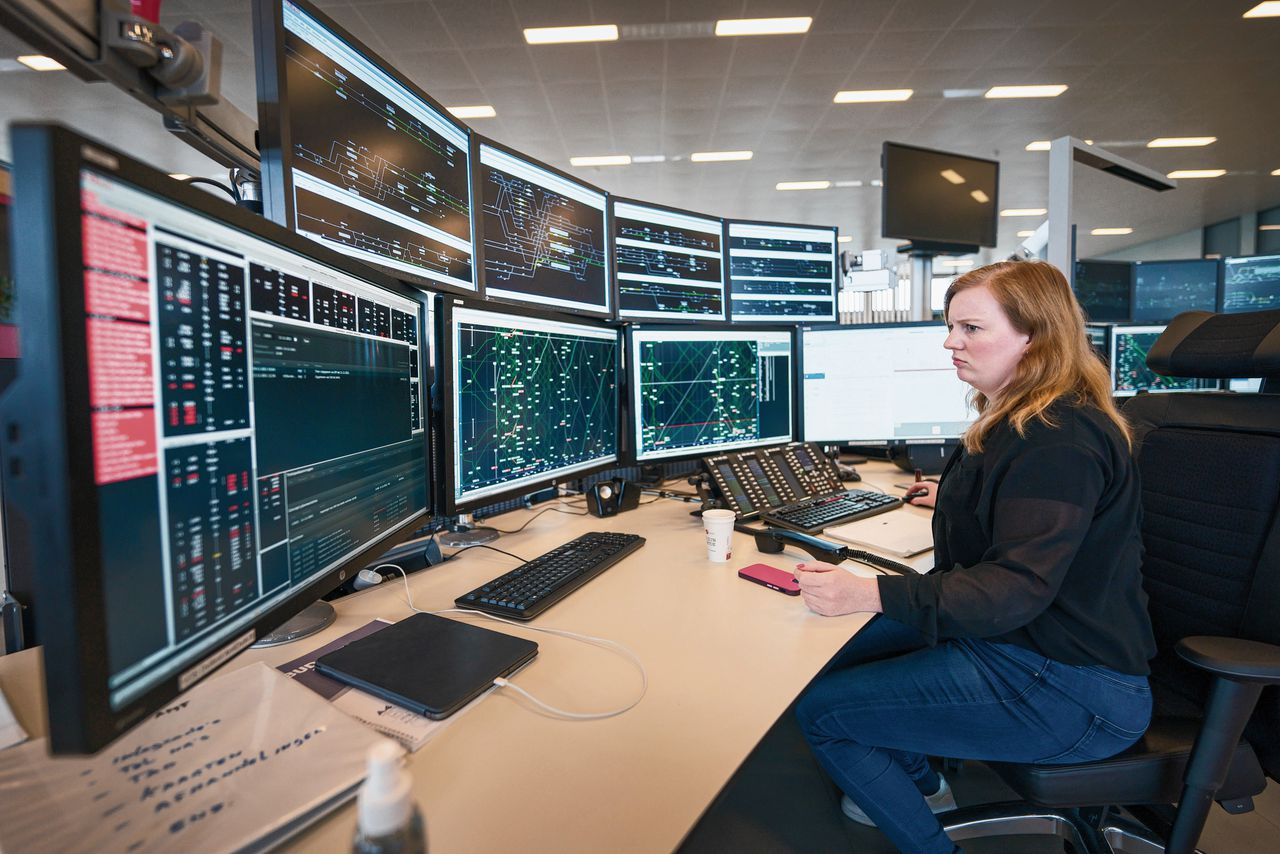 With one click on his screen and a bell, Willem Brouwer (60) can stop a train. Thousands of people will then be unable to travel any further. On his desk is a telephone with four small screens and dozens of white buttons. Behind it are eight computer monitors. One shows series of green numbers. On another a jumble of white and colored lines. “Look, those green lines, those are the roadways. Those yellow lines are trains.” The systems no longer hold any secrets for Brouwer: he has been working as a train traffic controller for forty years.

Brouwer is one of the 120 train traffic controllers at the Utrecht traffic post of railway manager ProRail. They ensure that the trains can run without problems on routes around Utrecht 365 days a year. Utrecht is the heart of the Dutch train network: the largest of twelve national stations, which employ a total of 750 people. Train traffic controllers are the first point of contact for problems on the track.

The atmosphere at the ‘post Utrecht’ looks relaxed this Thursday. There are about eighteen train traffic controllers at work. They have a good time together, they say. But dissatisfaction plays a role in the background of ProRail’s policy. The railway manager has been struggling with a staff shortage for some time, which has prevented trains from running several times. There is currently a national shortage of sixty air traffic controllers. In addition, there is also a high absenteeism due to illness, about 15 to 20 percent. Last week there were fourteen sick, a week before nineteen. Moreover, there is dissatisfaction among the employees: they do not feel heard by the management.

Between peace and calamity

The service of a train traffic controller is unpredictable. Sometimes nothing happens for a long time and they can sit back. But if a phone suddenly rings, or something changes on the screen, they have to act. For example, for a broken overhead line, or a switch failure. In the event of a calamity, such as a collision or a fallen tree on the track, an alarm is sounded. Then everyone immediately jumps to attention. That variety, that is the challenge of the work. “You have to be able to withstand underload and overload,” describes train traffic controller Bert Schipper.

What makes the work harder are the irregular working hours. Train traffic controllers work in alternating shifts: early, late or night, even on weekends. Training with your football team every Thursday is therefore not included. However, there is also an advantage to this. Sometimes you have the week off and you can go to the Efteling with your son, like Bert Schipper did.

Due to the continuing shortage of staff, gaps are also appearing in the roster. Pepijn Oosterlaar (29), who has been working in Utrecht for two months, manages ‘the track section’ Utrecht-Den-Bosch today, but he cannot take a break during his eight-hour shift.

Today he works with three colleagues, while there are normally five. Now there is no train traffic controller available for support in the event of calamities and there is no ‘relief service’, so that colleagues can rest for a while. ProRail compensates for the lack of breaks with sandwiches, which are eaten behind the desk.

Until recently, Oosterlaar was store manager at outdoor sports store Bever, but he was looking for more of a challenge, an ‘intellectual stimulus’. The training for train traffic controllers was tough, he says. In fact, the process before the training was mainly tough. “I had to take difficult IQ tests, talk to psychologists and role-play.”

Train traffic controller training is a stumbling block, acknowledges ProRail. Of the hundred people who start with the preparatory phase, only two move on to the training, which lasts nine months: one of them obtains a diploma. Moreover, the training is expensive, confirms a spokesperson. He does not want to share the exact costs. According to several train traffic controllers, ProRail pays approximately one hundred thousand euros per student.

Started as a platform supervisor

When colleague Peter Bransen (56) did his training thirty years ago, everything was different, he says thoughtfully. The people who then became train traffic controllers, he says, were a different type. “I only have my HAVO diploma. I started at the track as a platform supervisor, then I became an assistant train controller and then I moved up to train controller. That was an honorary job.”

Now the position for the new, young air traffic controllers is the start of their career. They quickly move on to a higher position. ProRail mainly wants to attract HBO graduates, says Bransen. “But guys like him” – he points to colleague Oosterlaar – “They are not going to work here for ten years. They have more to offer.” In the past twelve months, 7 percent of the total number of employees moved from or through to another position, according to figures from ProRail.

What also annoys employees is that it is so difficult to get leave. Leave requests for a whole year must be submitted in one go in October. Suppose someone is getting married or there is a party, then you cannot take a day off. There is also frustration that many managers have been added in recent years, who receive high salaries. “There are almost more managers than train traffic controllers,” says traffic controller Joop van Kuijk (64 scornfully.

In addition to the high turnover, there is also a threat of shortages due to an aging population: dozens of train traffic controllers will be retiring in the coming years. One of them is 64-year-old Van Kuijk, a man who smiles a lot, with bright blue eyes.

He believes that there are now shortages due to employees who are retiring. “They could have seen this coming for years.” He himself will retire next September. “I’ve already been asked if I can’t stay longer, but I’m not going to.” The main reason can be seen on his screen: a photo of twins in the same orange and white striped suit. Van Kuijk became a grandfather last May. When he retires, he will have more time for Bibi May, Leia May and ‘his Wendy’.

Reaction of director of ProRail ‘We underestimated the problem’

ProRail director John Voppen recognizes the problems outlined to the train traffic controllers. “There has been too much focus in the past on short-term solutions and not properly anticipating the future,” he says in an interview.

For example, the number of training places was previously doubled, but that turned out to be far from sufficient. “We underestimated how big the problem is.”

ProRail has now taken a new package of measures. The organization will further expand the number of training places: there are now 106 places and this should increase to 152 in 2023. The organization also wants to shorten the nine-month training course where possible. More money has been invested in the recruitment and selection of new staff.

“We want to hire the right people who really succeed”, said Voppen. The organization also wants to create a clear career path for train traffic controllers who can also become trainers, for example, in order to prevent outflow. The current air traffic controllers receive a monthly allowance of 300 euros.

In order to solve the acute shortages in Utrecht, a flex pool will be used in the coming period. This consists of people who were already train traffic controllers in the past and who are now structurally deployed in Utrecht. Colleagues from other posts also assist. Yet Voppen is also pragmatic. “There are shortages and we can’t solve the problems right now, we still need time to really get enough people available.” There is therefore a real chance that passengers will also have to deal with train failures in the near future.

A version of this article also appeared in NRC in the morning of November 15, 2021