Etel Adnan, the teacher of simple abstraction, dies at 96 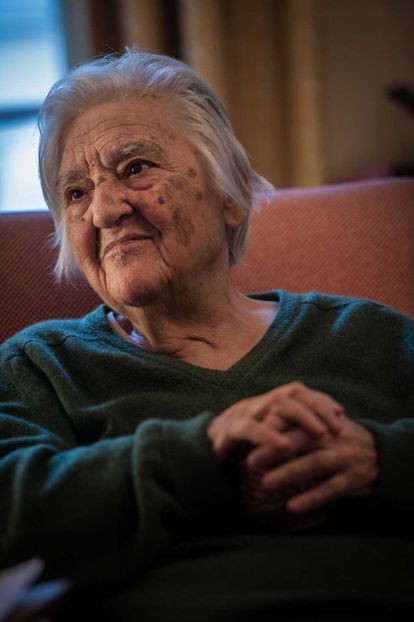 Etel Adnan, at his home in Paris in April 2019.bruno arbesu

The creator Etel Adnan (Beirut, 1925) had to wait until old age to free herself from the hackneyed and often skewed labels of exoticism with which many tried to define her fruitful career. Writer, journalist, poet, painter, activist even without intending it, Adnan obtained the recognition of the art world well into the eighties, when at last it stopped being a mestizo anomaly that did not fit in any classification to use and began to be considered, smooth and quite simply, one of the most prominent artists of abstraction. In this last decade the tributes multiplied, and the umpteenth consecration, and the definitive one, was the exhibition that the Guggenheim Museum in New York dedicates to him, alongside another by Vasili Kandinsky, until next January 10. A sample that will serve as an epitaph: Adnan has died in Paris, still active, at the age of 96, his partner, the Lebanese-American sculptor Simone Fattal, announced this Sunday.

The polyhedral litmus that was the trajectory of Adnan was being measured until his opulence – full of adventures like a Homeric journey – was reduced to the most extreme simplicity, bordering on minimalism. Adnan came up with the new measure of light, paraphrasing the title of the Guggenheim exhibition: his is a rediscovered, basic and summary palette, free of all additives, because the artifices were always alien to it. He lived his whole life stripping himself: of style, of formats, even of roots. Someone who was able to renounce one of his mother tongues, French, due to his rejection of the role of France in the Algerian war, demonstrated with his gesture the contingent and accessory of the reasons of being.

An Arabóphone by birth, Adnan, who studied and trained in French, began writing poems in English – many of them raging cries against the Vietnam War – after taking root in California, in one of her many vital comings and goings. and artistic, from Lebanon to the United States, from America to France. Her pilgrimage was a form of miscegenation that replaced the genealogical one: her parents were a high Damascene official of the disgraced Ottoman Empire and a Greek Orthodox born in Smyrna (present-day Turkey). More hybridization, impossible. 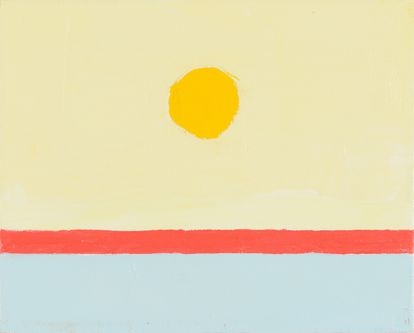 It may be that the fact of being a woman, and of voluntarily placing herself in the rear, has deprived her of figuring in the Olympus of the Arab intelligentsia, but her reflections on the influence of colonialism – and by extension, of the chains of Orientalism – are at the height of conspicuous contemporaries and countrymen such as the famous Edward Said. Because, like the great intellectual, Adnan enunciated cultural otherness with the counterpoint of critical worldliness. His literary testament is found in the novel Sit Marie Rose, from 1977, a cruel account of religious intolerance in his native country and its effect on women; a cry of rage against sectarian and gender discrimination, like a fine rain that soaks the bones: all the layers of disdain to obscure and tie women. In Spanish the book has been translated Loving one becomes a bird (La cama sol ediciones), a perfect example of his excellence as a poet who flows, like backwaters of a river, in the three languages ​​he passed through: English, Arabic and French.

Adnan made her debut in creation as a writer, but it didn’t take her long to pick up the brushes. He would never completely abandon any of the disciplines, although he would place himself more firmly in the least ideological a priori: the plastic arts. She began to paint in 1958, already settled in California, where she had come to do graduate school and where she ended up working as a university professor for decades. As a source of inspiration, he chose Mount Tamalpais, near San Francisco. The geographical accident runs through his pictorial work, in repeated reincarnations; for years he painted the mountain live; then from Paris, where he returned from Lebanon, an intermediate stage in his life that coincided with the start of the civil war (1975-1990) and with a new foray into journalism in his two mother tongues, Arabic and French. Finally settled in Paris, she continued to recreate the Tamalpais, always subject to a resounding and metaphysical sun. 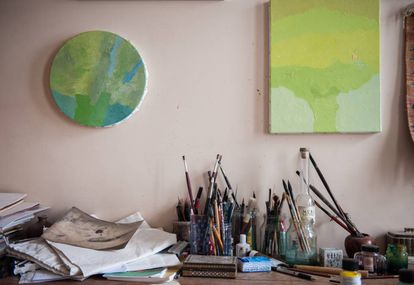 Workspace at Etel Adnan at his home in Paris in 2019..bruno arbesu

Documenta 13 curator Carolyn Christov-Bakargiev saw her work in a Beirut gallery in 2010 and decided to exhibit it in Kassel. Adnan showed there abstract oil paintings and a selection of leporellos, booklets in accordion format, folding, illustrated with his drawings and poems, a selection of which can also be seen in the New York exhibition. Kassel was his consecration, and since then the main galleries, such as the Parisian LeLong, and the largest museums in the world opened their doors to him, no longer as an exotic representative of a national and battered culture such as Lebanese, nor even a more regional one such as the Arab, but as an international artist without corsets. Nonagenaria, exhibited at the Whitney in New York, the Massachusetts Museum of Contemporary Art or the Serpentine Galleries in London, until he reached the Guggenheim exhibition, the end of a career much larger even than his work.