A room without a ceiling, with four bunk beds

There is a serious shortage of pillows. Kees says he would like to drive to IKEA to stock up on a few hundred cheap copies, but that is not allowed. Pillows have to be fire-retardant, Leon says, or they won’t get in. Then you just roll a sweater in a towel.

Kees Delbeek has been working full-time for a few weeks already, arranging things for the emergency shelter for asylum seekers in the Limburg village of Schinnen. And Leon Giezenaar (51) keeps a close eye on the entire construction of the emergency shelter. The fact that there are no pillows is a minor problem when you consider what there is. Under such great time pressure.

Look, Giezenaar says, and he opens the door of one of the huge, stark white pavilions. They were put down in a few days on an abandoned American army base on the outskirts of Schinnen by the guys from the festival industry, who have little to do because of corona. He walks past the cabins that have been placed in the tents: rooms – without ceilings – measuring four by eight meters, with four bunk beds, eight laminated mattresses, eight lockers and eight sheet/blanket packages. The blankets and mattresses are of course fire resistant, says Giezenaar. 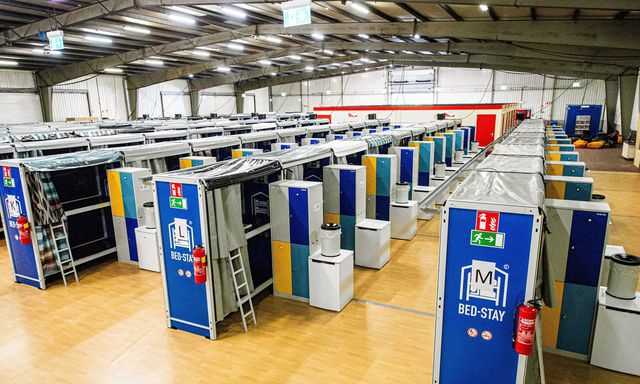 Important is the tens of meters long trunk against the roof of the tent, through which warm air is blown: heating. There are similar pavilions in Almere, but without heating. “It gets too cold there,” says Giezenaar.

Here, in Schinnen, there is room for 450 asylum seekers. Emergency shelter, of course. People can’t stay too long. But it won’t be that short either. Soon a few months. Because for about three months, about twelve hundred people a week have been arriving in the Netherlands, and there is really no room to accommodate them. The more than eighty asylum seekers’ centers are packed. Partly with people who are still in the procedure, partly with people who already have a residence permit but do not yet have a house.

COA board chairman Milo Schoenmaker has asked the informants to make the reception of asylum seekers more flexible. The current situation only confirms that. Schoenmaker: „We have to get rid of the system of constantly opening and closing locations. And avoid having to arrange (expensive) emergency shelter again in the future. That is why we have been arguing for a while for shelter that is stable in terms of financing and flexible in implementation.”

So Leon Giezenaar, location manager of the nearby asylum seekers center in Sweikhuizen, and Kees Delbeek set to work here. Both men have been working for COA, the organization that arranges the reception of asylum seekers, for years, and they tackle the job in a routine and apparently relaxed way.

Giezenaar thought it was a bit exciting when the fire brigade came to check after a week. “You have to think about so many things,” he confesses. The site has several emergency exits, and – yes! – a number of street lamps turned out to be broken: then people cannot find the exit in an emergency. There had to be big light poles.

They are there, the light poles. And the fire brigade was satisfied. Also about the fire safety of the buildings. Giezenaar decided to use a number of empty buildings of the army base as offices for the staff, for the doctor’s service, as a dining room and as a recreation room. It turned out to be difficult to get the heating and electricity working. That’s why white delivery vans turn continuously onto the site, full of local plumbers and mechanics.

Giezenaar opens a door to a large room. Kees Delbeek has filled it with orange plastic chairs and Formica tables. It was once the bowling alley for American soldiers. Now it is the dining room for asylum seekers.

Here a meal is served three times a day on disposable plates, explains Philippe van Nimmen of catering Umami – each time in three rounds, because of the numbers. He has experience with the target group that you cannot, of course, serve a stew with sausage. “We work a lot with poultry,” says Van Nimmen. “They know chicken legs and drumsticks all over the world.” Rice is fine, pasta too, fries are a feast. But with vegetables you have to be careful: they like peppers and maize, but don’t like chicory or Brussels sprouts. Cauliflower with bechamel sauce: a no go. Van Nimmen: „Sometimes you try something. Puree or something. It’s also nice when they taste something new.”

We walk to the next building. Here, Leon says, I’d like to set up some ping-pong and billiards. He called town and country, but no, ping pong tables were nowhere to be found. There is still the gym of the army base. A COA employee who can organize tournaments is still being sought.

Around noon the first bus with asylum seekers arrives on the site. Two more buses will follow today. About forty men stumble out of the bus, carrying suitcases, overnight bags and plastic bags. They are mainly Syrians. They gather in the dining room and sink into Kees’ orange chairs, the bags and suitcases around them.

Standing on a platform, a COA employee explains that they are divided into three groups: red, green and blue. They get a pass – to be able to enter and leave the site. There are also rules: no smoking indoors, no fighting. And please note, the wifi is not working yet, but it will tonight.

After food and a place to sleep, Wi-Fi is the most essential, Giezenaar had previously said. “That’s how they keep in touch with the home front.”

The men look glassy, ​​most don’t speak English. A young refugee from AZC Sweikhuizen, who came along with Giezenaar, translates everything into Arabic as well as possible.

One by one, the men are called forward. They get their pass and also a paper bag with two toilet rolls, a disposable razor and a hotel package of shampoo and soap. And a lock for the locker. In broken English they fire their questions at the COA employees. How long do we have to stay here? When will I have an interview with the IND? Friendly but determined they are brushed off. The employees have only been here for a day. Besides, no one knows the answers to their questions.

They leave in groups for the pavilions, following a COA employee. Bob, bob over the wooden decking. Curtain to the side (there is no door in the cabins). Just find a spot.

The next morning some agitated men stand outside in the autumn sun, right in front of the generator. The few men who speak English are busy. They are constantly pulled up to translate the complaints and questions for the journalist or COA employees. They say they slept badly. It’s cold, it stinks and it’s noisy. They don’t even have a pillow. They want cigarettes, but they have no money. Don’t they get a bank card? Can’t they go back to the asylum seekers center in Budel?

Giezenaar speaks to them calmly. No, he doesn’t know how long they’ll stay either. Yes, it’s his job to make sure they have the best time in the emergency shelter, he says. But it remains to be done, he sees that too.