Of aviators, jíbaros and kings 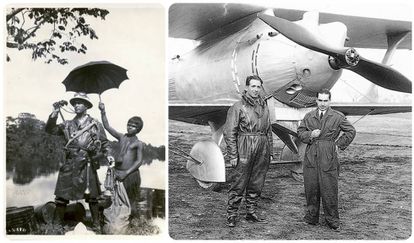 A heavily armed explorer with a Jíbaro boy and the pilots Ignacio Jiménez Martín and Francisco Iglesias Brage (on the right) in front of the ‘Jesús del Gran Poder’. Iglesias Brage Fund (Kingdom of Galicia Archive) / Historical Archive of the Air Force

According to the famous theory of the six degrees of separation, proposed in 1930 by the Hungarian writer Frederick Karinthy, only six people, at most, separate all the inhabitants of the Earth. Even at the risk of appearing presumptuous, let me point out that I am just a jump away from Elizabeth II of the United Kingdom thanks to Felipe de Borbón y Grecia, King of Spain who, during a visit to EL PAÍS headquarters in Miguel Yuste, when He was still a prince and I was a freelancer, a mercenary journalist who charged so much for the piece, he crossed the newsroom to shake my hand, perhaps because someone had pasted a Republican flag on the column next to which I was sitting. 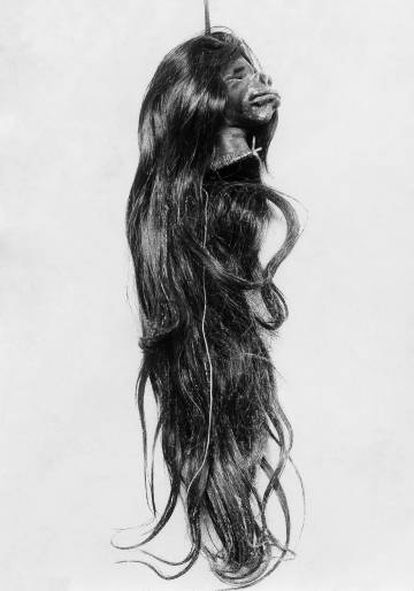 Although the hypothesis has not yet been proven, the truth is that the rule of six degrees is fulfilled. Only one jump separated my father, Pedro Merino Sanz (may he rest in peace) and my grandparents Arcadio and Víctor, farmers from a town in Segovia, from Samaren III, apu (chief or king) from the Jíbaros Huambisas of Alto Marañón, reducers of heads, a ritual known as tsantsa. And that jump is starred by the famous captain Francisco Iglesias Brage (1900-1973), pioneer of aviation, military engineer and Spanish explorer. It was thanks to Samaren’s daughter, Princess Macato, an Amazonian Pocahontas who fell in love with her good plant, her blue eyes and the round glasses that gave her an intellectual air (although she was almost illiterate), that Ildefonso Graña Cortizo saved hers (1878-1935), better known as Alfonso I, the Galician king of the Jíbaros, born in 1878 in the Orense parish of Amiudal. The man who accompanied him in the canoe was not so lucky, another Galician resident in Iquitos who lost his life and surely his head in the encounter with the Indians. In 1932, the year my father was born, the lives of the adventurer Graña and Captain Iglesias Brage intersect like the warp of a tapestry. But let’s not anticipate events.

According to account Maximino Fernández Sendín In his book Alfonso I of the Amazon, King of the Jíbaros (2005), Alfonso Graña was one of the many Galicians who emigrated to Manaus (Brazil) at the end of the 19th century, attracted by the rubber fever. Around 1910 he moved to the opulent Peruvian city of Iquitos, near the confluence of the Ucayali and the Marañón, where the Amazon River is officially born. There he will work for a decade as a rubber tapper and gold digger and will make a great friendship with another Galician immigrant, Cesáreo Mosquera Chousal, a native of Ribadavia (Ourense) and founder of the mythical bookstore. Friends of the Country, today Tamara bookstore, an oasis of culture in the heart of the jungle. Around 1920, with the fall in rubber prices (the British had managed to smuggle seeds of the Hevea brasiliensis tree to plant them in their colonies in Asia, thus ending the rubber monopoly of Peru and Brazil) came the economic debacle to Iquitos. . It is then that Alfonso Graña canoes up the Alto Marañón in search of fortune and his track is lost for more than two years. 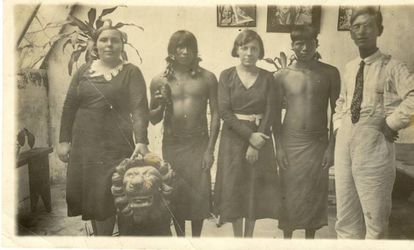 Graña, with Mosquera’s daughters and two jíbaros (the one on the left holds a reduced head) .Reign of Galicia Archive

One day, the people of Iquitos, including his good friend Mosquera, see him arrive by the river in a xangada (log raft) with Jivaro Indians and various merchandise. “Our countryman Alfonso Graña from his tribe from the Santiago and Marañón River with Huambisas Indians has just arrived here, bringing a raft with a lot of shrapnel to sell here,” Mosquera writes in his memoirs. “Cured and smoked animals and birds, it seems a necroteric, which Darwin would say (…) We have already portrayed ourselves and everything with them, and even with the cachola [cabeza reducida] of a mociña that they have flaked [cortado] they know why ”. 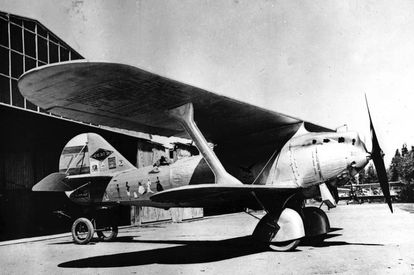 At the beginning of the 1930s, Captain Iglesias was already a famous aviator known for his records in long-distance flights, such as the one he carried out in 1929 with fellow pilot Ignacio Jiménez Martín between Seville and Salvador de Bahía (Brazil) in the Jesús del Gran Poder, a Breguet XIX GR-72 airplane manufactured in Spain by Construcciones Aeronáuticas (CASA) that today is preserved in the Museo del Aire y la Astronautica de Cuatro Vientos (Madrid). After their transatlantic flight (6,746 kilometers in 44 hours), both continue their journey through Latin America. They fly from Bahia to Rio de Janeiro and later to Montevideo and Buenos Aires. They cross the Andes mountain range and land in Santiago. His journey continues through northern Peru, Panama, Nicaragua, Costa Rica and Guatemala to Havana (Cuba), the final stage of a 20,300 kilometer journey.

In 1931, just proclaimed the Second Republic, the pilot undertakes preparations, supported by the Republican Government and intellectuals such as Gregorio Marañón, Ramón Menéndez Pidal, Ortega y Gasset and García Lorca, of the so-called Churches Expedition to the Amazon, the largest Spanish scientific company since the 18th century. An idea that was born, according to Iglesias himself, while he was flying over the Andean countries in the Jesús del Gran Poder. On June 16, 1932, the Cortes gave the green light to the project with the creation of a Board of Trustees and the construction of a modern exploration ship, the Ártabro, which would be launched in Valencia on February 16, 1935. 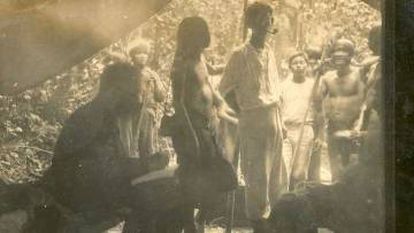 Alfonso Graña, king of the Amazon, among some of his subjects.Archive Kingdom of Galicia

Between June 1933 and March 1934, Iglesias Brage returned to the Amazon as a Spanish delegate of the League of Nations to administer the so-called Leticia triangle, an Amazonian territory that at that time was in dispute between Colombia and Peru. During your stay, take the opportunity to collect data for your new adventure and gather a collection of ethnographic materials –bracelets and necklaces made of macaw and toucan feathers, masks, blowguns, quivers of poisoned arrows and other objects– which today are kept in the National Museum of Anthropology of Madrid. For this he has Cesáreo Mosquera, who had offered his invaluable help and that of his countryman Braña as soon as he learned of the expedition plan by, Churches to the Amazon in 1932.

Braña, who had succeeded his father-in-law Samaren IIII, as apu de apus died in 1935 of natural death in some remote place of his fiefdom in the jungle, in the area of ​​the Pongo de Manseriche, “Ten kilometers of violent eddies, rocks and torrents”, as described by Mario Vargas Llosa in his novel La casa verde, after reigning for 12 years over a huge region of the Amazon populated by more than 5,000 Indians of the Awajún and Huambisa ethnic groups. . In 1933, a feat made his fame grow, to the point that the Peruvian government officially recognized its sovereignty over the Jíbaro territory: transferring by raft to Iquitos, a week away, the embalmed corpse of Alfredo Rodríguez Ballón, a pilot of the Peruvian Air Force that had crashed in the jungle. 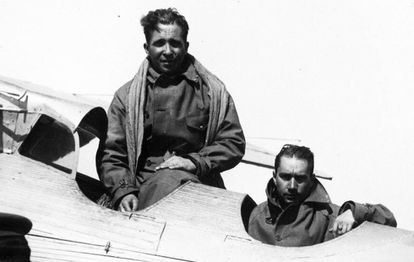 What happened to the expedition? Finally, it did not come to fruition. Among the causes are the serious economic crisis of 1935, which led to a cut in public spending, and dissensions among the participants: the management of the project by Iglesias was criticized by naturalists, who were annoyed by the military discipline with which he wanted to organize his scientific work; likewise, the sailors of Ártabro considered that it should be directed by an officer of the Navy and not by a military aviation. On March 26, 1936, the Board of Trustees was dissolved by decree and the distribution among various scientific institutions of the material and equipment acquired was approved – among which there were hygrometers, theodolites, bargraphs, rain gauges, hydrometers, hypsometers, hydrogen generators for meteorological balloons, compasses, nephoscopes to measure the speed of the clouds … for a value of 129,701 pesetas and 45 cents, according to the inventory. 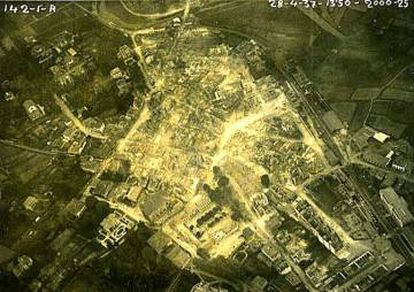 Unpublished aerial photos of Gernika taken on April 28, 1937, two days after it was razed by the Condor Legion. Archive of the Kingdom of Galicia.

On the heroic life of Captain Iglesias a shadow floats. Although he was a close friend of Lorca, who in 1921 had dedicated the poem Saeta from his book Poema del cante hondo and other leftist intellectuals to him, at the outbreak of the Civil War, perhaps out of spite, perhaps because at the time of the coup He was in El Ferrol, he took sides with the rebellious military. At the beginning of the summer of 1936 he built the military airfield of Escalona del Prado (Segovia), where he became very popular among the boys of the town, including my father and my uncles, for his affable character and the stories he told about the jíbaros and their blowguns and poisoned darts. The first six German pilots and aircraft sent by Hitler to Franco were on this airfield, and the planes that bombed Madrid took off from its two runways throughout the war. Among the documentary collections of Iglesias Brage, today guarded in the Kingdom of Galicia ArchiveSome unpublished aerial photos of Gernika appeared on April 28, 1937, two days after it was razed by the Condor Legion, to show the Franco and Nazi commanders the effectiveness of the bombing.