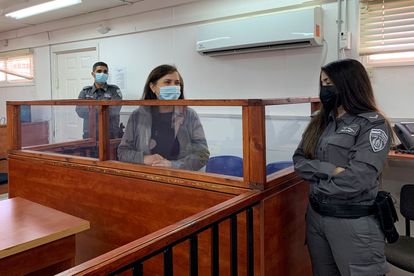 The Spanish humanitarian worker Juana Ruiz, on the 7th in the military court of Ofer, in the West Bank.Laura Fernández Palomo (EFE)

The defense of the Spanish aid worker Juana Ruiz Sánchez, who was found guilty on Wednesday by an Israeli military court after an agreement to have her sentence reduced, has asked the military jurisdiction to clarify that she has not acknowledged having collaborated with the Popular Front of Liberation of Palestine (PFLP), classified as a terrorist. Two Israeli ministers, the Minister of Foreign Affairs, Yair Lapid, and the Minister of Defense, Benny Gantz, used the agreement to incriminate several Palestinian NGOs that have recently been outlawed. In a joint statement, both ministers affirmed that Ruiz “admitted to having raised funds for the PFLP” and “confessed that (that party) used the proscribed NGOs.”

“These statements are completely false, since neither the court nor the prosecution have investigated these facts, which have not been admitted by the defendant,” said Ruiz’s lawyer, Avigdor Feldman. “Rather, facts contained in the antecedents are interpreted (…) and that were incorporated into the agreement at the last moment without mentioning the accused,” the lawyer maintains. He waits for the judicial clarification to take place before the sentence is handed down on the 17th.

Juana Ruiz, 63, was arrested seven months ago at her home near Belén (West Bank) on charges of collaborating with an illegal organization, as an employee of the health NGO, Comités de Trabajo para la Salud. By reason of his residence he is subject to the military jurisdiction that governs under the Israeli occupation for the Palestinians.

“I always thought I was working for a legal organization. I’m very sorry if I made a mistake about something. I hope they take into account that I have not tried to do harm, ”Juana Ruiz closed her statement before the military court in Ofer, near Ramallah (West Bank). His hands were handcuffed and his feet were shackled.

His defense wants the military justice to make it clear now that the prosecution has accepted a deal: that the background of the agreement has nothing to do with the accused, as the two Israeli ministers have later assured. “The defendant is not mentioned at all at all, who does not acknowledge having knowledge about the activity of the PFLP in the West Bank and did not know that the money (donated to the NGO for which she worked) could be transferred to the PFLP”, emphasizes his attorney.

Feldman also points out that the later incorporation of the antecedents chapter had the objective of “supporting the false official statement against the accused.” In sum, it considers that the manipulation of the legal process casts shadows that “may undermine the independence of the military court with respect to the military authorities.”

The Israeli humanitarian NGO B’Tselem accused the foreign and defense ministers of trying to manipulate the legal agreement negotiated by Ruiz “to incriminate Palestinian civil society organizations.” “They have not provided any evidence before,” B’Tselem said, “and now they intend to justify with this case their decision to close and silence these associations.”

The lawyer warns in particular about the seriousness of the legal consequences of not clarifying and rectifying the content of the agreement reached with the prosecution. “The statement from Ministers Lapid and Gantz, in which the defendant is cited by name and surname, may put her in danger of being criminally persecuted in Spain or in other countries by being designated as a prominent militant of the terrorist group PPLP,” he concludes .

Juana Ruiz admitted the charges of “collaborating with an illegal organization” (referring to the Health Work Committees, an NGO also declared outlawed), and “trafficking in foreign currency”, in exchange for a foreseeable sentence of 13 months in prison and a fine of about 14,000 euros, a relatively light sentence for a security case with alleged ties to terrorism.

But above all to shorten her stay in a prison reserved for Palestinian activist women in northern Israel where in seven months she has only been able to receive two family visits in prison, hold half a dozen meetings with Spanish consular representatives and make a phone call. . These processes under Israeli military jurisdiction can drag on for years and have a very high conviction rate. According to the annual report of the Israeli military courts, in 2011 it reached 99.74%.

Michoacán: “Father Pistolas”, the priest who asks residents to arm themselves in the face of insecurity