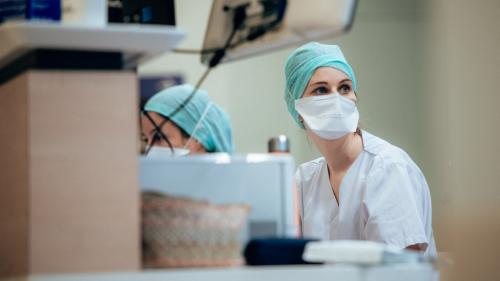 The European Health Commissioner evokes an “important step” in the fight against Covid-19. For the first time, the European Medicines Agency (EMA) approved the marketing in the European Union of two antibody treatments against Covid-19, Thursday, November 11. These are Ronapreve, from the Swiss pharmaceutical company Roche, and Regkirona, from the South Korean company Celltrion. Franceinfo looks back on these two treatments in five questions.

How do monoclonal antibodies work?

The principle of these monoclonal treatments is to isolate antibodies from patients who have had Covid-19, to reproduce them in the laboratory so that they can be injected into other patients. This allows the body of the patient who receives these antibodies to fight the disease better.

Speed ​​is crucial in this type of treatment: it should be administered within five days of the onset of the first symptoms, which should not be severe. “It is a treatment which addresses the very early forms, before hospitalization, before the need for oxygen”, explained on franceinfo Gilles Pialoux, head of the infectious and tropical diseases department of the Tenon hospital, to Paris. The goal is to intervene as soon as possible to avoid serious forms of Covid-19, hospitalizations and deaths.

Who are these two treatments for?

The European Medicines Agency “recommends that Ronapreve be authorized in adults and adolescents (from 12 years of age and weighing at least 40 kg) who do not need supplemental oxygen and who are at risk of developing a disease. severe form “. Ronapreve can also be prescribed preventively, to uninfected people 12 years of age and older, weighing more than 40 kg, depending on the agency press release (in English).

Regkirona can only be given to adults positive for Covid-19 who do not need oxygen but are at risk of developing a severe form of the disease.

Patrick Berche, member of the Academy of Medicine, notes that these treatments are “primarily” intended for people over 80, “who by definition are at very high risk”. The microbiologist also mentions “patients aged 65 to 80 who have a comorbidity such as diabetes or hypertension”. These criteria are coupled with the need to administer the treatment within five days of the onset of symptoms. In practice, these treatments will therefore only concern a limited number of people.

Are they already in use?

Ronapreve is already known in France. The High Authority for Health has given the green light, at the beginning of August, for “certain immunocompromised patients at very high risk of developing a severe form”. Ronapreve was “the first drug benefiting from early access since the implementation of this device in early July 2021”, said the authority. “There are around 1,000 or 2,000 patients in France who have received it,” said Patrick Berche. “We have an early access authorization for an immunocompromised population in which the vaccine does not take. We did one dose, two doses, three doses and they have no antibodies, so they have an access authorization. to this injectable product, “explained Gilles Pialoux.

“In my department, it has already been administered to about thirty people. (…) It is quite effective, with prevention that works.”

Gilles Pialoux, head of the infectious and tropical diseases department at Tenon hospital, in Paris

Less known in Europe than Ronapreve, Regkirona is already marketed in South Korea, as reported by HuffPost in the month of August. For Regkirona, a study also shows that taking this treatment significantly reduces hospitalizations and deaths. Of 446 people who received treatment, only 14 were hospitalized, put on oxygen or died, compared to 48 among 434 people who received placebo treatment.

How are they administered?

Ronapreve and Regkirona are much heavier treatments than Molnupiravir, an antiviral treatment that is taken by mouth. “Unfortunately, these are intravenous treatments that require hospitalization”, notes Patrick Berche. “The limit of the product is its complexity in administering it”, agrees Gilles Pialoux.

How much do these treatments cost?

NGOs have denounced, in recent months, the high price of Ronapreve, which they estimated at around 2,000 dollars (1,700 euros) per dose, reported AFP on 11 October. “It’s quite expensive,” comments Gilles Pialoux.

This is the “usual price of an antibody-type drug, or even an innovative drug,” commented on franceinfo in February, Hervé Watier, professor of immunology at the University Hospital of Tours. And to add: “It would be a chemical drug, it would cost also expensive. It costs between 1000 and 2000 euros, but it is a usual price.”

Carlos Treviño: The INM issues immigration alert for the former director of Pemex

Carlos Treviño: The INM issues immigration alert for the former director of Pemex