The legislators of the local congresses in 27 Mexican states have the obligation to intervene in state criminal codes and any other norm that criminalizes the interruption of pregnancy, explains Rebeca Loera, coordinator of advocacy on public policies at GIRE (Group of Information in Chosen Reproduction).

“Since abortion was decriminalized in Mexico City in 2007, local congresses have had the option of legislating in their territories, but few did. What the recent ruling of the Court tells you now is: if you do not decriminalize you are going against the Constitution”, Emphasizes the specialist.

More than a decade passed from the decriminalization of abortion to 12 weeks of gestation in the CDMX for another state to advance in this direction. In 2019, Oaxaca took the step; two years later, in 2021, the short list was joined by Veracruz and Hidalgo, and just a few days ago Baja California. This means that there are five entities that have been painted green.

In the rest of the country there are still regulations that criminalize abortion in the first weeks of gestation, except for some exceptions that vary between each of the states, such as the pregnancy being the result of rape, when the woman’s life is in danger , when the product has malformations or for serious economic reasons.

“I am against stigmatizing those who make this decision, which seems to me, if it is already difficult and tough due to the moral and social, individual and spiritual burden, it should not be any more because of the force of law. No one gets pregnant in the exercise of their autonomy and then aborts ”, was one of the arguments of Minister Margarita Ríos Farjat in one of her speeches during the session.

But this year, on September 7, the Supreme Court of Justice of the Nation (SCJN) unanimously ruled that it is unconstitutional to criminalize abortion in an absolute way, in addition to speaking out in favor of women and pregnant women being able to decide on their bodies without this entailing criminal consequences, opening a watershed for all of Mexico to advance towards decriminalization.

The SCJN resolution opens the way to initiate legislative processes in each of the 27 states. “At least one legislator is needed to take this issue seriously, undertake his own initiative and it is analyzed in the relevant committees to give his exit before the Plenary and proceed to a favorable vote”, explains Rebeca Loera .

Just on Friday, October 29, the Baja California Congress rejected making modifications to the local Constitution that would guarantee women and pregnant people in the state the right to decide about their own body. One of the 15 votes in favor necessary for the deputies to make the constitutional amendments was missing, which was against the recent ruling of the SCJN.

However, in a second vote, Congress did approve modifications to the local Penal Code to decriminalize abortion within the first 12 weeks of gestation, as well as reforms to the State Health Law (to guarantee access to legal abortion services) and the Victims Law (to recognize the right to emergency contraception and legal interruption of pregnancy for victims of sexual violence). Thus, with 15 votes in favor, Baja California became the fifth Mexican state to decriminalize abortion. 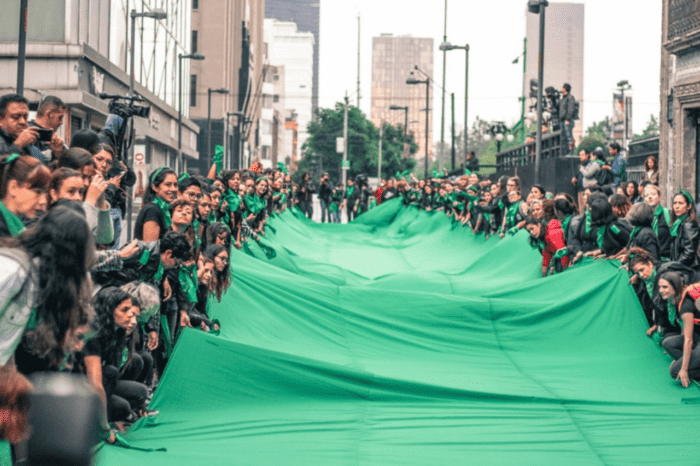 The difference between what happened before, when these initiatives reached the Plenary, is that now local congresses cannot go against the Constitution, so the SCJN ruling is a tool for legislating on respect for the right of women and pregnant people to decide about their bodies.

On June 29 of this year, for example, the Congress of Baja California Sur refused to approve the initiative to decriminalize abortion in the state up to 12 weeks of gestation; with eight votes in favor, six against, five absences and two abstentions, the legislators rejected the initiative. Months earlier, in Quintana Roo, Congress voted 13 against and seven in favor on the initiative for the legal interruption of pregnancy, after feminist groups pressured local deputies to legislate on the matter.

The path that the SCJN marked with its recent resolution is that decriminalization is no longer optional for local congresses, “On more than one occasion these advances depended on political arrangements or political will, but now they have no other option but to legislate in favor of our rights,” insists Loera.

“The path is laid out and it has to be done yes or yes. The Court’s ruling is not only legal but political, ”warns Adriana Jiménez, director of the Network for Sexual and Reproductive Rights in Mexico (Ddser). The specialist, also a member of Gender Equity, Citizenship, Work and Family, AC, points out that hindering sexual and reproductive rights has been used politically.

Both agree that the current political moment has made progress in for the rights of women and pregnant people, a combination between the fact that there is more gender perspective within decision-making positions and legislators from the left who have voted in favor of these rights. Jiménez exemplifies this with the role of deputies such as Hilda Luis, Tatiana Ángeles and Mónica Robles in the legislative advances in Oaxaca, Hidalgo and Veracruz.

How does the criminalization of abortion affect?

According to the Report of the Working Group on the issue of discrimination against women in the law and practice of the United Nations General Assembly, “criminalizing the termination of pregnancy is one of the most damaging ways of instrumentalizing and politicizing women’s bodies and lives, since it exposes them to risks to their life or health in order to preserve their function as reproductive agents and deprive them of autonomy in making decisions about their own body ”.

Based on the data presented in the report, 40% of women around the world are subject to restrictive laws, including those countries where they are imprisoned for having suffered a miscarriage.

The World Health Organization (WHO) has indicated that despite the penalty, the interruption of pregnancy occurs, leading women to resort to clandestine and dangerous solutions, especially for those less economically privileged. In short, criminalization from the laws of each country stigmatizes the procedure, limiting them in their decision-making.

In this sense, the Office of the UN High Commissioner says that the criminalization of health services, including abortion, is a form of discrimination. For this reason, “it is important that local congresses no longer turn a deaf ear and that they listen to those who are working to promote the legislative changes that Mexican women deserve,” emphasizes Rebeca Loera, from GIRE.

Josie: “Today’s rich don’t know how to be. Cristiano Ronaldo? Does not know”

Josie: “Today's rich don't know how to be. Cristiano Ronaldo? Does not know"