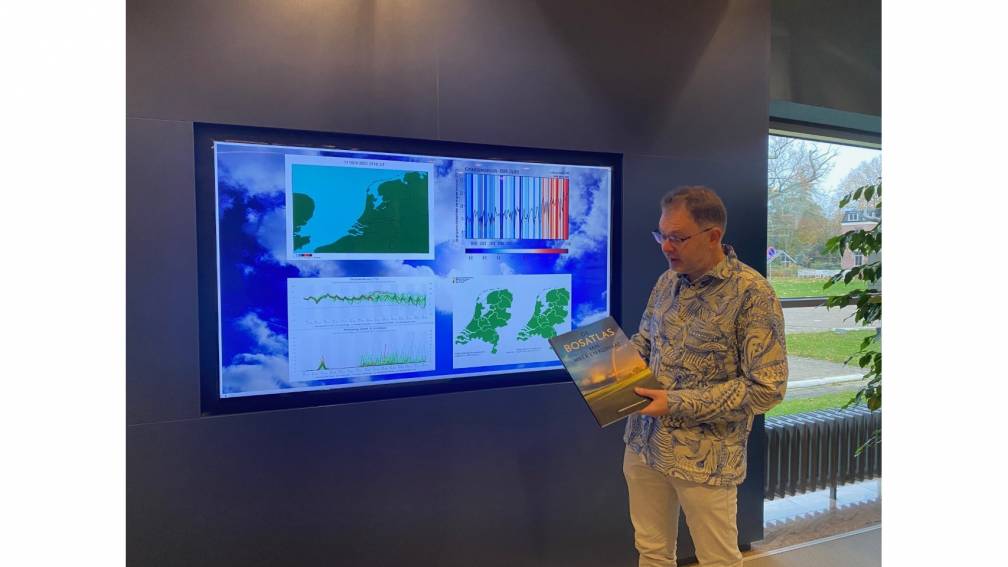 A real Bosatlas has now been published about the favorite topic of conversation of many Dutch people: the Bosatlas of weather and climate. Hundreds of maps and graphs from KNMI provide an up-to-date overview of the climate in the Netherlands and beyond. For example, it can be read that the chance of a cold King’s Day has been halved in the past century and that snowdrops bloom three weeks earlier than fifty years ago.

A new climate agreement is currently being negotiated in Glasgow. This atlas shows once again that something has to be done, says KNMI climate researcher Peter Siegmund, pointing to one of the many graphs: “Climate change is always present, but it is going very fast this century. Unusually fast. in recent years there have been many more heat waves in the Netherlands and fewer cold waves. The last was in 2012.”

One of the most current maps in the Bosatlas is that of flooding in Limburg. Last July 182 millimeters of rain fell in two days. That was unusually high, says Siegmund. “Every year, more than 800 millimeters falls. Now the amount of two months fell into two days. This could have happened anywhere in the Netherlands, it is not the case that flooding occurs more often in Limburg than in other Dutch areas.”

Another map shows that it has started to rain considerably more in the Netherlands. Siegmund: “It has become about 10 percent wetter. Here you see two maps of the precipitation amount. You see a lot of dark spots in the last period, the darker, the more rain. Thirty years ago it was a lot less.”

The differences in precipitation are greatest along the coast. “On the one hand, this is due to the North Sea becoming warmer, which means more evaporation. But we also think that the cities in the Randstad have something to do with it. Tall buildings act as a kind of mountain, the air goes against it, then up and then falls like rain again.”

The Netherlands has not only become wetter, our country has also become a lot sunnier in recent years. The sun shines on average 1774 hours per year. “The explanation is that there are fewer clouds. There is more often a warm, dry easterly wind. And we are not sure how that will come about. It could be climate change because the Mediterranean is much warmer. But that is not certain, it is can also be a coincidence. There are always long-term variations in temperature or wind.”

KNMI is currently working on new climate scenarios. It also contains predictions about what future winters and summers will look like, says Siegmund: “They are both getting warmer. And if you look at the precipitation: the winters are also getting wetter. In the summer it is likely that the same amount of rain will continue to fall or it will a little less. But heavy showers and extreme precipitation will actually increase.”

Videos | Interlagos is a puzzle for Red Bull: more speed or more downforce?

World Day of the Poor

World Day of the Poor