He imprisoned Lula and broke with Bolsonaro: now Sérgio Moro will contest the presidency 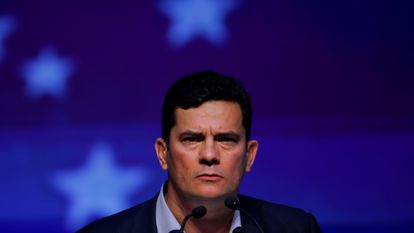 Former judge Sérgio Moro, 49, aims to become the candidate of Brazilians seeking an alternative to President Jair Bolsonaro and his predecessor Lula da Silva. The magistrate joined the Podemos party this Wednesday in Brasilia and in his speech he outlined the broad outlines of his project for the 2022 presidential elections. Moro has presented himself as a man of integrity, guided by principles, not personal interest, who wants to reconcile polarized Brazil, fight corruption, eradicate poverty and defend austerity. Not a word in the entire act of the great stain in his career, which the Supreme Court ruled was not impartial when judging Lula.

He has gone on stage with a mask and without a tie. He no longer has that aura of a hero against corruption. The left considers that it was instrumental in throwing it out of power. And for the faithful to Bolsonaro he is a traitor. The judge who condemned the leader of the Workers’ Party (PT), who assured that he would never enter politics, accepted when Bolsonaro invited him to be Minister of Justice. The idyll with the ex-military man did not last long. He resigned. Brazilian politics, like soap operas, is full of dramatic encounters and misunderstandings between a handful of characters.

Those sentences of Moro were crucial to prevent Lula from facing Bolsonaro in the 2018 elections. After serving a year in jail, the leftist was released and his sentences were overturned.

The Brazilian Podemos is a party founded in 2017 with a program focused on the fight against corruption. Brazil will hold two-round elections in October 2022 with the Bolsonaro-Lula duel as the most likely, although none have made it official. Electoral polls show Lula in the lead for months while Bolsonaro loses support, mainly due to the bad economic situation, with rising inflation, and high unemployment. The malaise with the management of the pandemic is wide and deep.

The speech was the first step for the former judge Moro to become the third way candidate, one of those who consider the president and his predecessor to be extremists. Moro has his sights set on those who, like himself, are disillusioned with the president. Although there are many voters who declare themselves orphans of candidates, none of the candidates to assume the flag of the center-right – two governors, the president of the Senate, a former minister of Health … – has managed to get even close to the leading duo in the polls.

Since leaving the government accusing Bolsonaro of interfering with the police to protect his children, Moro has lived in the United States, far from politics and the spotlight, preparing his strategy without wearing himself out.

Big words and few details in the first speech, which has included several attacks like this on Bolsonaro: “It is a lie that corruption ended (as Bolsonaro claimed), the truth is that they weakened the tools to combat it.” He has also boasted that Lava Jato mitigated the traditional impunity of politicians and businessmen, the decline in violence while he was minister, has proclaimed that poverty can be eradicated without breaking the spending ceiling, and promised that it will privatize ineffective public companies in addition to turn Brazil into an example of preservation and green economy.

His speech comes four years late because ending the abuses of the political class was already Bolsonaro’s motto then and corruption is no longer the main problem for Brazilians, who are demanding other solutions before. According to a survey this Wednesday, the economy is for 48% the main problem followed by the pandemic, social problems and corruption.

The first survey that has measured the options of the former judge indicates that he capitalizes the support for the third way with 8%, striking down the other applicants, while Lula (47% of the votes) leads easily against Bolsonaro (21%).

The former minister has also defended controversial issues for the political class, such as the end of reelection for positions in the Executive Branch and the raising of elected positions, which has served to protect them in investigations, he said. “We must admit that (reelection) is an experience that did not work out in our country. The president, once elected, begins, from day one, to worry more about reelection than about the people. He is on a permanent political campaign. And there is still the risk of generating caudillos, populists or dictators, from the left or from the right, ”he stressed, emulating the speech of the candidate Bolsonaro. The now president is about to choose the party with which to run for reelection.

The current leader of Podemos, Senator Alvaro Dias, presented Moro as the antidote to political belligerence, hatred because “in the confrontation of the extreme left with the extreme right, chaos triumphs.”