Baïnes alerts could save lives in Nouvelle-Aquitaine 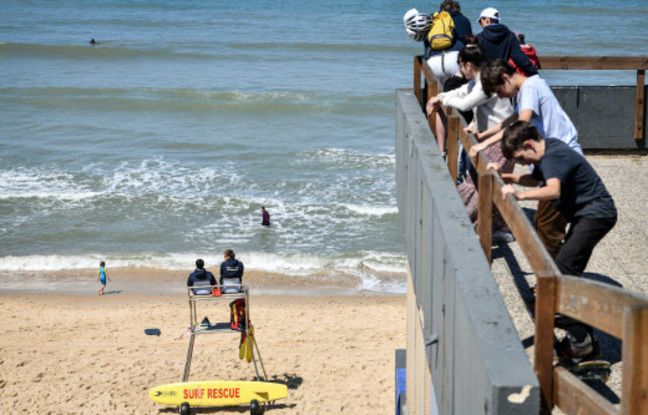 From this summer, warning messages will be sent to vacationers on the Atlantic coast in the event of a risk of baïnes, these very strong sea currents which insidiously carry swimmers out to sea. It is thanks to the research work of Dr. Eric Tellier, who began a thesis on the prediction of the risk of baïne in 2013, that a model was able to be developed.

Its statistical power is proven and should make it possible to avoid drowning, among the 20 to 30 deplored each year on the neo-Aquitaine coast. “The model allows to say that 50% of drownings will take place on certain days when the model is at 5 out of 5 (maximum risk) and when the model is at 1 in 5 (minimum risk), the probability of a drowning is lower. at 1%, explains Eric Tellier. These are strong markers that allow you to communicate at the right time. “

In 2013, while he was intern and looking for a thesis subject, he met doctor Bruno Simonnet, surfer, confronted in his work at Smur and in regulation with patients carried away by baïnes. He also talks with lifeguards who explain to him that the baïnes occur in series and rather at specific times.

He sets out on this track, crossing the Samu archives concerning interventions related to baïnes since 2011, meteorological data and information recorded by lifeguard swimmers (since 2017). The feedback from these specialists is very useful because they are on the front line and come to the aid of people in difficulty who will not necessarily need medical assistance, and therefore appear in the figures of the Samu. “There is an excellent correlation between their feedback and the model,” says the doctor.

The model is not simply based on an assessment of the hazard, it assesses the risk by taking into account the exposure of bathers. In conjunction with physicist Bruno Castel, the wave parameters and the type of swell come into play, while being compared with the weather situation and the calendar (public holidays, vacations, etc.). by combining these two components, we have a risk model, ”emphasizes Eric Tellier.

Alerts to be triggered at the right time

Too many messages cloud the message and numb the vigilance of bathers. Based on this observation, the idea is to offer targeted communication over ten days a year. The idea is to make swimmers aware of this risk, which is hardly visible to swimmers, who are in a leisure environment that is not conducive to vigilance.

The only parameter of the risk of baïnes is not enough to trigger an alert, unlike the avalanche communication system. For example, when the air temperature is below 21 degrees the risk is considered very low, even if there is swell and baïnes exist. Conversely, with a small swell but a hot summer day and high attendance, the risk will be considered significant. Beyond the model, information panels and more general communication on beach access are being considered, for example with the Médoc regional park.

The model will be improved on the basis of the additional data collected and the thresholds for triggering alerts will be further reviewed. “We realized that at certain times, it is useful for a human to moderate it,” points out the researcher. For example, if the risk is 5 out of 5 and it is raining (which the model does not take into account), then a human can say that it is not necessary to trigger the alert. “This model wants to avoid the pitfall known by the United States meteorological agency” Noa “which did not take into account the exposure and gave level 5 out of 5 alerts when there was no one on the beach …

The publication of Eric Tellier’s work has encouraged other scientific teams to look into this baïnes issue, particularly in countries such as India and Australia where it is crucial.

He warns that the effects of setting up alerts on the Atlantic coast will be difficult to measure since there are more or less dangerous conditions depending on the year. “If the swell is not very dangerous this year, we will not know whether the reduction in the number of drownings is due to milder conditions or to the effectiveness of the message,” he anticipates.