At COP26, the interests of fossil fuels better represented than the countries threatened by global warming 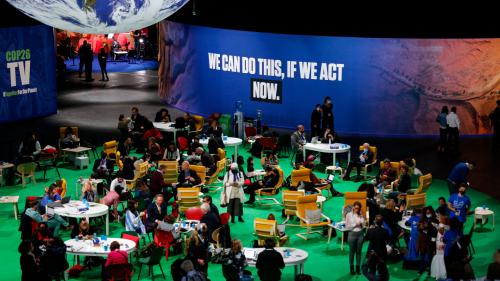 Imagine wine and spirits representatives in the aisles of an Alcoholics Anonymous conference. While leaders and negotiators from around the world discuss at COP26 the conditions for the gradual abandonment of fossil fuels, the main cause of global warming via their greenhouse gas emissions, representatives of these same industries are fighting behind the scenes to defend their rights. interests. More than 500 lobbyists from the oil and coal sectors are present at the climate conference in Glasgow (Scotland, United Kingdom), the NGO revealed Monday, November 8 Global Witness (link in English), which peeled the list of accredited persons (link in PDF) within the delegations.

With 503 representatives, the fossil fuel industries have more emissaries than the best-represented nations. According to the NGO, more than 100 oil companies are present at the COP and no less than 30 associations or organizations in the sector. In numbers, they crush the delegations of many of the countries most affected by the consequences of global warming, such as the Democratic Republic of the Congo (373), Bangladesh (296) or Haiti (46). They are also ahead of the larger delegations, such as Brazil (479) and Turkey (376).

Since the signing of the Paris Agreement, in the wake of COP21, in 2015, countries have committed to reducing their greenhouse gas emissions. However, these lobbyists are working to “defend an agenda incompatible with the Paris agreement, or even to slow down its implementation”, points out Clément Sénéchal, spokesperson for Greenpeace, to franceinfo.fr. “The challenge of the COP is to use an explicit language on the exit from fossil fuels,” he explains. However, according to him, the weakness of the commitments, which are already reflected in the first versions of the final text resulting from the negotiations, testifies to the undermining work of this “plethora of high-level lobbyists, who come to influence decisions in the wrong direction, no doubt with success “.

Thus, the International Association for the Trading of Emissions Rights (IETA) has 103 delegates on site, three of whom are from the BP oil company. “This association includes a huge number of fossil fuel companies,” explained to the BBC Global Witness Murray Worthy accuses them of putting forward “false solutions [qui] prevent taking the real and simple measures that would resolve the climate crisis, namely no longer extracting fossil energy “.

Above all, these representatives included in delegations and “who defend particular interests”, benefit from privileged access to discussions, where “civil society and NGO experts, who defend the general interest, are required to do so. gap in negotiations, “continues Clément Sénéchal, echoing the request formulated in the forum of the 51 members of the Citizen’s Climate Convention.

According to the Global Witness account, 27 countries (including Canada, Brazil and Russia) have representatives of the petroleum and coal sectors within their national delegation. Asked by franceinfo, a spokesperson for the COP26 recalled that “it is up to each country to choose these delegates and that the United Nations Framework Convention on Climate Change (UNFCCC) issues all accreditation to the COP. ”

In the COP26 pavilion area, Australia demonstrated a carbon capture and storage project carried out by one of the most greenhouse gas emitting companies in the country. Removed from the stand after having aroused the excitement of some of the participants, this showcase bears witness to the more or less discreet presence of these industries in climate conferences.