Pau Gasol: “I see myself as a club leader or consultant” 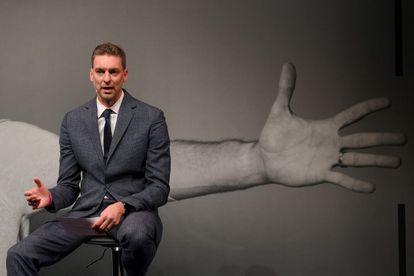 Pau Gasol, in the act in which he announced his retirement, at the Liceu, on October 5.LLUIS GENE (AFP)

A month after announcing his retirement after an extraordinary career of more than 22 years in professional basketball, Pau Gasol continues with a frenzied activity, although already off the courts. He contemplates continuing to be linked to basketball, among other facets, occupying a position in an NBA franchise or in a European club. “I face it with perspective, without haste. I will contemplate options, both here [en la NBA] as in a team like Barça. I would see myself as a leader or a consultant, something that would allow me the necessary flexibility to dedicate myself to many other things that I want to do, ”he explains through a videoconference with EL PAÍS.

The 41-year-old former player, together with his brother Marc, presides over a Foundation against childhood obesity, is a member of the Sportsmen’s Commission of the International Olympic Committee (IOC), an ambassador for Barcelona and directs various business projects.

Next Friday, on Prime Video, it will premiere Pau Gasol. The important thing is the trip, a four-episode docuseries about his professional career and lesser-known aspects of his personal life. The serious injury that kept him for more than two years without playing and from which he recovered to play the last games with Barcelona and his fifth Olympic Games with the Spanish team is the guiding principle of the series.

In it, more than 60 characters related to his career are interviewed, such as his parents, Marisa and Agustí, his brothers, Marc and Adrià, his wife Catherine McDonell, coaches such as Phil Jackson, Doc Rivers, Scariolo, Aíto and Jasikevicius, players like Garnett, Derek Fisher, Raúl López, Navarro, Mirotic and Tony Parker, as well as the doctors and physical therapists who helped him in his recovery. “The objective of the documentary is to internalize and share the reality and the adrenaline of what a stage of professional life such as basketball has filled you,” explains Pau. “That will not be able to replace anything because it is almost unmatched. But it can be enjoyed and pursued with other objectives and other projects, applying the same principles. In the end, the message of this documentary is that the person is still there, he is the same, he simply evolves, grows, adapts, reconverts himself if you want, but does not change. And that’s important, because in the end, you have to prepare. You cannot fall in love with a chapter of your life and stay there anchored ”.

Gasol commented on Ricky Rubio’s extraordinary game at Madison, where he scored 37 points and gave 10 assists. “It has been spectacular, very happy that he played that great game in the most historic stage of the League. When the transfer to Cleveland took place, it was not the most attractive scenario for a player like him in particular, but this very positive start to the team and to the season fills him with enthusiasm and enthusiasm. They are in a very good line and this personal performance is wonderful. As we all know sport has these ups and downs. But I think that Ricky is very clear about that. He conveys it a lot, not being too high or too low. Always stay on that line of balance, to keep your head where it needs to be ”.

The level of the Spanish

The two-time NBA champion with the Lakers praises Ricky’s career in sports: “He has been on a very good line of growth and evolution in recent years, playing at a very high level and that is recognized in the end.” It surprises him that the brothers Willy and Juancho Hernangómez are not counting on more minutes of play. “I expected them to have more prominence and involvement in the rotation of their teams. Perhaps Boston has more demand to win with more players in its position (that of Juancho), but in the case of New Orleans it is different. I thought Willy could have more minutes continuously and more when the team is not performing. Both teams have new coaches and in this case it doesn’t seem like I’m not helping them. But the League is very long. You have to be prepared, keep working and when the opportunity comes, show that you deserve to be in the rotation continuously ”.

Pau Gasol was not included among the 75 best players in the history of the NBA. He was one of the stars who were not in the relationship like, among others, Tony Parker, Vince Carter, Mutombo, Ginobili or Klay Thompson. “It is anecdotal”, sentence. “It is not something that bothered me or that worries me, not at all. I have worked for a career to be proud of and I am very happy with how it went. I have been at a very high level for many years. Everything is very relative and very media. It has no more history ”.

The Lakers, the same day that Pau announced the end of his career, issued a statement in which they explained that they will pay tribute to him by removing his jersey with the number 16. “It is difficult for me to assimilate that fact and the moment,” says Pau Gasol. “It is a huge honor that is a bit beyond my imagination. But I’ll go talking to them to see what idea they have. And if it happens, hopefully it will happen, it will be to enjoy a historic moment, being with the players who have gone not only through that franchise, one of the most historic in the League but also the one that most together with Boston, with the greatest in the league. history of this sport and with a very special mention for being next to Kobe ”. The one who was his partner and friend, who died in January 2020, has withdrawn at the Staples Center the two jerseys with the numbers he used during his 20 seasons with the Lakers, 8 and 24.