On November 8, 1521, the only remaining Malay pilot among the crew of the Trinidad and the Victoria gave the news that they had reached the Maluco. Or Maluku, in the language of the pilot. They were on Tidore, one of the five small islands, with Ternate, Motir, Makián and Bachán, which follow the western coast of the island of Halmahera from north to south. They are the top of underwater volcanoes and, except for Bachán, which reaches 2,000, none of these islands exceed 150 square kilometers. Maluku was not, therefore, what the Moluccas in Indonesia are for us today.

The date is important, because that is what the project that the Portuguese Ferdinand of Magellan presented in February 1518 before a young King Carlos I who still understood little about things overseas. Magellan not only knew how to get to the Spice Islands by following a course to the west, but he could also demonstrate that these islands belonged to Castile according to the geographical demarcations of the Treaty of Tordesillas. Now, three years after the project was exposed, after having found the desired Patagonian Strait and crossed an unknown Pacific Ocean, with Magellan already dead, two of the five Navy ships had managed to reach the Maluco.

There, spontaneously, forests of cloves grow and when their tiny flower takes on a reddish color it is time to collect it. It was a valuable, coveted and really expensive spice, because, already at the time of Vasco de Gama, very early in the century, in the markets of India, cloves doubled the price of cinnamon and tripled that of pepper. In the West it was worth 500 times the price at which it was bought in the Maluco, and although Europe was not the largest consumer, it barely reached an eighth of the production, never comparable to the tons of pepper that were unloaded in a year. By way of comparison, in the year that Magellan was preparing to set sail for the Moluccas, in 1519, 1,212 tons of pepper arrived in Lisbon, compared to eight tons of cloves. 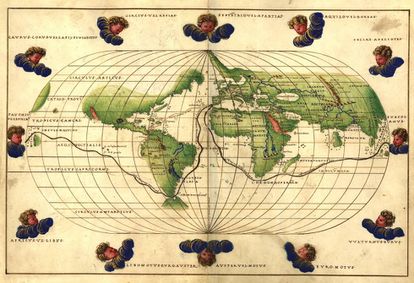 Map of the Magellan route from one of Battista Agnese’s atlases (1544).

For centuries, and it continued to be so when the Portuguese approached there in 1511, those who were in charge of navigating to the Maluco to load cloves were the Javanese, and from Java they distributed it, or other merchants would look for it from Java. It was an ancient indirect trading system that had kept the islands unknown for the international spice trade. In fact, medieval Arab geographers had the nail and nutmeg as originating from Java, the Chinese also thought about it until well into the 15th century and there they were placed by Marco Polo, Ibn Batuta and Jordano de Severac; only Niccolo di Conti placed the nail on the island of Banda – being wrong, because nutmeg is from there – and that information passed to Fra Mauro’s world map around 1460. No one (or no Westerner) in Tordesillas’ time could mark those islands in the map of the world, but that, obviously, does not mean that its existence had not been known for centuries, and even millennia.

From 4,000 years ago it is the oldest preserved archaeological sample of the nail, found in Lower Sumeria, and the first written reference appears in the epic Ramayana from the 3rd century BC. However, the first Muslim merchants did not appear on the Maluco until the 12th century, although the traffic itself began 200 years later (and also the Islamization of all those islands).

The Maluco was remote and incognito, but for that reason it is not going to think that he was not powerful. The courts of Tidore and Ternate were lavish, although that is not mentioned in the Portuguese documents closest to the first meeting. The Sultan of Ternate and the rajas of Tidore and Bachán controlled the export of the nail, demanded tribute from neighboring archipelagos, and maintained permanent armies. The business was assured: in years of good harvest (which used to be irregular), between 5,000 and 7,000 bars of cloves were harvested (that is, 1,000 to 1,500 tons). El Maluco was very rich, everyone knew that; or everyone who sailed the Pacific and the Indian Ocean knew. 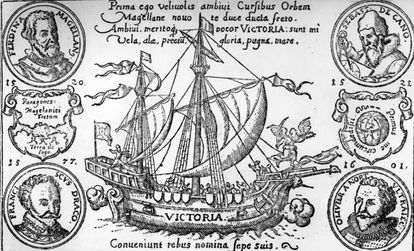 An engraving of the Nao Victoria dated around 1580, with the medallion portraits of Ferdinand Magellan (top left) and Juan Sebastián Elcano (top right).

So seven months and seven days after they had hastily left the Philippine and almost invisible Cebu, where the lifeless body of their Captain Major Magellan and those of many others remained, those of the Spice Army had finally arrived at Tidore. They thought it was a beautiful place, that’s how Captain Gómez de Espinosa told Emperor Carlos V from the prison of the Hindustani Cochin in 1525 (or he dictated it to a Portuguese copyist, because Espinosa was illiterate): “Sir, don’t have your Sacred Majesty the islands of Maluco, and those of Banda and Timor, because Lord, there are three orchards, the best in the world ”. The fact is that in Tidore the reception was wonderful, according to the chronicler Antonio Pigafettra, because the king had dreamed that they would arrive.

The Spaniards offered him gifts and Sultan al-Mansur (that was the king’s name) said that he wanted them to be “eternal friends”, that they would all be “very faithful vassals of the King of Spain”, that he had them “as if we were his own children ”and that“ from now on his island would no longer be called Tidore but Castilla ”. And two days later, on November 10, that man was still giving away the ears of the Spaniards: if he wanted “a seal and a royal flag”, if “he was willing to fight to the death for the king [de España]”. Anyway … feel free to think what you want about these exciting phrases for the men of the emperor’s army. Perhaps al-Mansur already had news of the wandering of those ships and their imminent arrival and, in addition, perhaps he saw in those people a possible help to face his enemy Abu Hayat, king of Ternate, with whom the Portuguese did business. In any case, the best thing about all those goodwill and friendship agreements is that it led to the Book of peace and friendships that have been made with the kings and lords of the islands and lands where we have arrived, and they are the annotations that the clerk of the Victoria, Martín Méndez. A real mine of information.

In Tidore they met the Portuguese Pedro de Lourosa, who gave them news that would undoubtedly have saddened Captain Magellan. His friend Francisco Serrão, his companion of adventures and conquests in the East prior to the trip to the west, the one who had been sending him letters to Lisbon encouraging him to organize the nail and nutmeg company, had died of poisoning. Fate had caused both friends to die barely a month apart: Serrão in March and Magellan in April 1521.

However, the Spaniards must have been much more concerned by the second piece of news that Lourosa gave them: the ships of the Portuguese António de Brito were going to meet them to arrest them. It was obvious that they had to wake up with the spices, and on November 12 negotiations began for the nail, in exchange for, basically, the products stolen from the junks that the Spanish had been attacking during those months of navigation through the Philippines, Borneo and the Celebes Sea. Pigafetta adds that “the rush we had to return to Spain made us exchange our merchandise for much less than we could have obtained”.

As observant as ever, the chronicler Pigafetta explains very well the things he learned about cloves and nutmeg, and also the customs of the Maluqueños, highlighting in particular that men “are so jealous of their women — to whom, In the previous sentence, he considered ugly — that they did not want us to go ashore with our flies open “, a phrase that speaks for itself and does not deserve further comment … During the following days they continued to buy nails and fire artillery every time a man appeared. from some nearby island to visit them, until “we had no more merchandise [para negociar y] each started selling his own cape, or shoes or shirt or other clothing to get his share of the shipment. ” It seems that the Spaniards were going to drop moorings towards Spain a bit unsheltered.

Isabel Soler She is the author of the biography ‘Magallanes & Co’ (in press) and a professor of Portuguese culture at the University of Barcelona.

Survey: Abortion and women’s rights, priorities in the US