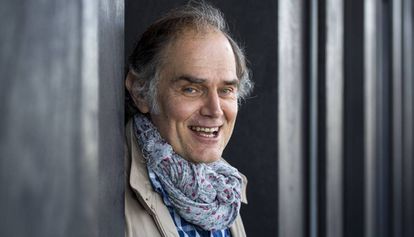 The non-transferable mark of the narrative by Javier Pérez Andújar (Sant Adrià del Besòs, 56 years old) is a formula with a few playful drops and somewhat crazy situations that varnish a well-informed social conscience. Everything in his books is wrapped in a cellophane that mixes, in an endearing way, high culture with pop. And those elements, even more accentuated if possible, are those that the four artists handle without much luck locked in a garage with fascism and colonialism as a backdrop in The Year of the Buffalo, the work with which the Barcelona writer has won 18,000 euros for the 39th Herralde Novel Prize. More apocalyptic than crazy is Cuernavaca surrounded by fires in which the finalist novel by Daniel Saldaña is located. The Mexican writes about three former schoolmates who try to put out their interior burns in The dance and the fire.

The bizarre collection of voices and attitudes (an increasingly accentuated resource in his production) allows the author of The brave prince and Walks with my mother mix such disparate references as the Nazi Klaus Barbie, the writer Patrick Modiano, Cola-Cao, the television detective Cannon, the CNT, the artist Joseph Beyus or the Kentucky fried chicken Colonel Sanders himself. Folke Ingo, a Finnish communist writer, is the medium from which Pérez Andújar created this award-winning novel that strengthens him in the team Anagram, stamp to which he bequeathed shortly before the pandemic with The phenomenal night (2019), after a long career in Tusquets.

“Being pop is like paying the water bill, for me it is not pop, it is normal life; it is what you are: if you have read Mickey Mouse as a child, then that … ”, explains Pérez Andújar Andújar, one of the multifaceted contents of The Year of the Buffalo, a work that admits that it has “a clear tendency to entropy, to delirium”. And from its very genesis: the novel had been in my head “for almost 25 years”, started and left a lot of times, and of which only the first 14 pages remain, today practically identical. “I cracked: I always came back to her when I finished another, thinking that was what I really wanted to write.” Based on memories of when he was a worker at the RBA publishing house from colleagues who had been montoneros and former guerrillas, “a lot of people who brought a Latin American legend behind them”, it was during the pandemic, “that time of no one”, when , he assures: “I lost my shame and jumped in; the years have also given me more skills to tackle it ”.

It was not easy: Ingo leaves a posthumous novel about four artists locked in a garage. In the process of editing the work, the story told is stitched and contradicted from some intentional footnotes of a particular page Holy Company intellectual, a group that, among others, is made up of the Spanish translator of the book, the author’s Finnish mother, a teacher, a father of one of the imprisoned artists or the former director of a peculiar film club in Santa Coloma de Gramanet. To this are added “some polyphonies of the author from the beyond on the human condition from the coups d’état and colonialism of the 20th century … And in this line, the narrators-characters precisely give a coup and take the book … I wanted things to happen to the book and not to the characters, ”says Pérez Andújar.

In addition to the usual references to literary classics (“I have a great debt to them, but first you have to live and then read them, in this order, because if you do it the other way around …”), humor and horror are mixed in a work that “it also has a political and commitment tone,” says the editor of Anagrama, Sílvia Sesé. “I have taken kilos of Cola-Cao, but after that there is also a case of Spanish colonial exploitation in Guinea, for example. Everyone is politics and everything is pop, a way of life ”, he reflects.

This attitude also explains the presence in the work of countless dictators and political figures with an authoritarian aftertaste, such as Pétain, Mogutu, Gaddafi, Franco himself … “Carlos Puigdemont also makes a cameo, inside the trunk of a car : what he always does, let’s go ”, reveals Pérez Andújar, critical of the independence process from the beginning. The brushstroke continues to be one more example of the particular combination of humor and horror that appears in the book: “They go parallel, but not mixed; When the Paracuellos massacre in the Civil War, the playwright Pedro Muñoz Seca, looking at the platoon, told them: ‘You can take my life, my family, my property, everything; the only thing you can take away from me is the fear that I now have. ‘ This is how humor and horror are combined ”.

It is also the result of a reincarnation literary The dance and the fire, the finalist novel. “I started it seven or eight years ago,” admits Saldaña (Mexico City, 37 years old). Some fires that ravage Caravaca (“it is an ugly city, fallen into disrepair due to drug trafficking, but it haunts me,” he says of a place where he lived for several years) physically translate the also quite unbreathable atmosphere that is created between three friends from adolescence who meet again, to emerge friendship, desire and the end of some illusions that do not stop reflecting the end of an era. The choreography prepared by one of the group of friends, Natalia, from the traditional piece by Mary Wigman, Hexentanz (a dance of the witches), evokes the airs of the city of Under the volcano by Malcolm Lowry and which resonates in the Caravaca of the work of a thriving Saldaña, which in 2017 was included in the Bogotá 39 list of the best Latin American writers under 40 years of age and in 2020 won the Eccles Center & Hay Festival award, which served to rivet the novel.

Its publication as a finalist work is also a way of consolidating the creation of Saldaña with Anagrama, where this year it has already published Planes flying over a monster, set of chronicles, reflections and exercises in metaliterature that, like his two previous novels, –The main nerve and In the midst of strange victims, both on Sixth Floor — difficult to classify