The tender series “L’Amour flou” reinvents the “Neither with you, nor without you (t)” 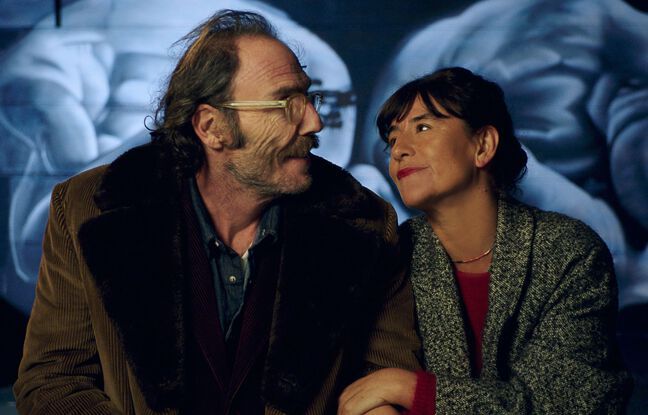 A feel good fantasy! Romane Bohringer and Philippe Rebbot have loved each other for ten years. From their union were born two children, Rose and Raoul. One day, they stopped being in love. But they loved each other all the same, in any case enough not to get used to the idea of ​​living in two separate places, of breaking up their home, of taking their offspring a blow to daddy, a blow to mum.

The duo had the unusual idea of ​​moving into two independent apartments, communicating with each other through the children’s room. An atypical place of life called the “separtement”. From this singular adventure was born, three years ago, a tender and joyful comedy on the breakup, L’amour flou, broadcast this Sunday at 8:50 p.m. on Canal +.

Romane Bohringer and Philippe Rebbot put the cover back on Monday at 9 p.m. on the encrypted channel with a series, bearing the same name as the feature film. If the film was about a separation, the series is interested in what happens after the breakup. How to rebuild your life when you are parents? All the more so when her ex lives in the room …

“The film had a crazy, very miraculous and upsetting story in our life. The birth of this film was a great moment. This film was made in a very carefree, spontaneous way, ”recalls Romane Bohringer, who co-wrote and directed this drama in nine thirty-minute episodes.

The idea of ​​a sequel was born in 2018 when Romane Bohringer and Philippe Rebbot promote the film in theaters and they are systematically asked the same question at the end of the debates with the spectators: “We want to know the sequel. Is it possible to live like this? Can you start over your life like this? “

A year and a half after the film’s release (which recorded nearly 200,000 admissions for a budget of 437,000 euros, which made it the most profitable production of 2018, according to Le Film français), Canal + contacted the duo with the idea of ​​making a sequel. “We realized that we had material”, slips Romane Bohringer.

“We wanted to make a fable, something quite epic”

Enough to make a series. “The film was almost self-written as life came. There, there was a writing decision, ”relates the showrunneuse, who discovered the constraints of serial writing on the job.

“I learned with the Canal + team what the arches, the patterns, the cliffhangers were at the end of each episode,” she says. And to add: “Us, our daily life, it is not Mission: Impossible, it does not occur delirious things. We had to raise our daily lives to a certain level of suspense and twists and turns. “No way to write a column:” We wanted to deliver a fable, something quite epic from our everyday life. “

The co-screenwriter is a little worried about the rigorous setting of the series. “I was obsessed with bringing together the accidental and the programmed, the artificial and the truth, the actors and the non-actors. I wanted real life to be able to come in and step in at any time. I was afraid that this organization would slow down our fragility and our freedom, she confesses. This was not the case at all. “

Like the original film, L’Amour flou maintains the… blur between reality and fiction. The action takes place in the real “separation” of the two actors and features their children, their parents, their friends (actors and non-actors), as well as their neighbors. “Everything is true in the series and, at the same time, we have raised everything to a place of narrative and fiction,” explains the author-director.

Romane Bohringer and Philippe Rebbot use their real life to better transcend it “in the manner of Nanni Moretti”, they say, hastening to specify “even if we do not compare” to the Italian director. The structure of the story has thus been completely “invented”. “If all sentimental and intellectual material is real, we have invented fictional doubles. We pushed our flaws, our questions to the extreme, ”laughs Romane Bohringer.

The series therefore portrays the tender, joyful and a little wacky daily life of the Rebbot-Bohringer tribe, halfway between a family fresco in the Do not ci, faire pas ça way and sentimental comedy. “It’s about making a family, not leaving each other, of ‘reinventing love’ as Mona Chollet says, of finding a different distribution, including geographic ones, of inventing a small society nourished by a certain form of ‘utopia’, underlines the author-director.

All the protagonists of the feature film are in the series. “The only two newcomers, arriving from outside, are Monica Bellucci and Eric Caravaca. They embody the world after and they are the ones who bring fiction into our daily lives. “

Can you rebuild your life in “separation”? Isn’t the “Neither with you, nor without you

“There is a twinning between Philippe and me”

She explains: “Philippe and I are no longer lovers, we know it deeply, but there is a twinning between us, something that does not end, it’s a strange life. “

The series is universal in scope because it asks the question of how to rebuild your life after a long story. “Personally, all my life since I was 16, every love story potentially represented the question ‘Is this the father of my children? And now, what is the next love in a woman’s life when you’re not going to have any more children? When the projection is elsewhere? », Analyzes Romane Bohringer.

L’Amour Flou also questions with great lightness and relevance the question of parenthood today. “I have a connection with hypercomplex motherhood. It was the dream of my life but I am very hard on myself… I am an ultra “guilty” mother. I always feel like everyone is doing better. Philippe has more distance from that, ”says Romane Bohringer.

Organic food, screens, etc. Fuzzy Love sketches “our good will to try to do the best we can, our daily failures and our micro-successes. “Because after all, turning into a” room “is probably the craziest declaration of love you can make for your children!