Djokovic versus Medvedev, the new reality (and rivalry) of the circuit? 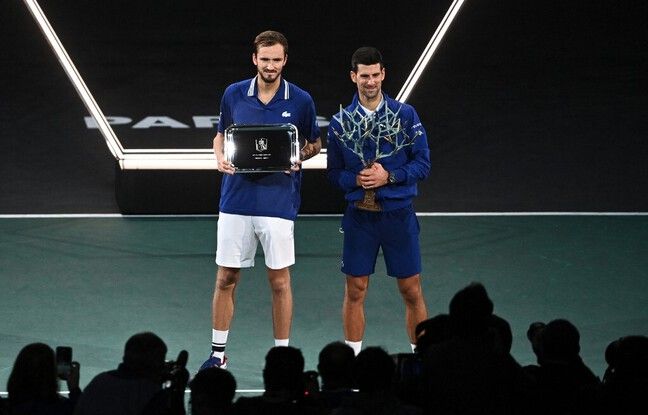 It’s a match that we dabbled in before launching and god knows we love tennis, however. But now, it’s hard for everyone to get used to the idea that Federer and Nadal are soon in the hospice and that the most alluring shock of tennis today is a duel between Novak Djokovic, still fresh as a roach despite his 34 years, and Daniil Medvedev, world number 2 and tormentor of the Serbian in New York at the beginning of September.

“I knew he would want a rematch”

This time it tipped in Novak’s favor. Three little nothing, while the Russian seemed to play his hand in the first set. He himself did not really identify a “turning point” in the meeting. Just an increasingly precise Djoko on the court. “It was a good tennis match against one of the best players in history. He was stronger than me at key moments. I knew he would want a rematch and I quickly felt he absolutely wanted to win ”.

Everything was there, indeed. The painful memory of Flushing, a public largely won over to his cause, since the entire Serbian community in Paris had bought their seats for Sunday and even the presence of his two children, Stefan and Tara, whom Djokovic kissed after the victory. “It’s the first time that my whole family has come together for one of my matches in France and it was a great feeling to have him with me”. We can think that daddy gaga, like any daddy, did not particularly want to lose in front of his two little monsters and who knows, it may have helped a little, especially in a game very hung at 5-3 in the second set.

A special day for @DjokerNole & family in Paris 🤗#RolexParisMasters pic.twitter.com/fsDXKF8Hfh

“A player who pulls Djokovic upwards”

It was then bordering on an indecent quality of play, with on the one hand the priceless ground cover of Daniil and on the other the offensive impulses of Novak, whom we have never seen so adventurous at the net. “What is super rich in this match is that we saw that Novak Djokovic was forced to leave his sector while against anyone else, when he is strong from the bottom, he wins, judge Arnaud Clément, who commented on the meeting on Eurosport. There he meets a player who pulls him up, as only Nadal, Federer, or Murray could do ”. The only one in this case, while Tsitsipas, for example, never really seemed able to fold Roland’s final despite two sets ahead last spring?

“We see that Medvedev is able to compete with a great Djokovic in the big games. For the moment we had not seen young people being able to do it, he does it systematically. It is officially the dolphin, the one who could challenge it next year ”. The one who makes it better, when the glorious adversaries of yesteryear are soon put away from the cars. Nobody, moreover, forced Djoko spoke of a “rivalry which is written” in his speech of victory, not without having taken the time to ask for the precise translation of his thoughts to Sébastien Grosjean, who came to deliver the winner’s trophy 20 years after his final.

The rivalry of the future?

The two men had also recently trained together in the south of France, where they live year round and the secret had been well kept. on the outcome of the training set disputed by the two men. “A very tight tie-break,” simply wanted to let go of Medevedev during the week.

Comment from Novak, after his victory on Sunday: “Daniil has no weak points in his game, he has improved his forehand a lot and he is able to take the point on his own, his defense is extraordinary for his size. I think it is the leader of the generation that is coming, he is getting closer to the world number 1 place, I am sure he will succeed one day. Until then, me and a few others will try to resist a bit ”

The head-to-head record after Bercy, six wins to four for Djokovic, reflects a balanced balance of power, characteristic of a rivalry capable of settling in time and in the public’s retina, even if at 34 years, the man with 37 Masters 1.000 (absolute record) is closer to the end than the beginning. “When you know Novak, I think it’s impossible to say that we have taken a psychological advantage on him. I don’t question myself when I meet him about who has the advantage or not. This is the life of a competitor “. Next episode in Turin, for the end-of-year Masters. Plan the popcorn.