The trumpets of the Israelites brought down the walls of Jericho, according to biblical tradition. But it was an earthquake that destroyed the Hisham Palace, essence of the refinement of the Umayyad dynasty in the city-oasis, inhabited for 10,000 years in the desert valley of the Jordan. After coming to light almost a century ago in successive excavations under British rule in Palestine, the relatively intact splendor of its vast 827-square-meter mosaic, one of the largest in the ancient world, had remained largely hidden until now.

The Japanese government has financed with more than 10 million euros a dome-shaped structure that covers it to protect it from the extremely dry and hot climate of Jericho. This unique construction in the Middle East, equipped with elevated walkways and viewpoints that fly over the mosaics, will allow the monument to be visited by tens of thousands of tourists from this month. Its opening to the public marks the rebirth of one of the jewels of early Islamic art of the Umayyad dynasty, during which floral and geometric designs were perfected over a century to give it its own identity.

The new dome covers a basilica floor that housed a swimming pool and luxurious baths of Byzantine Roman inspiration, along with a large reception and banquet room attached to the winter palace erected by Caliph Hisham Ibn Abdelmalik. Except one iconic six-pointed starry rose window, put back on its feet in the rehabilitation, the arches, columns and capitals that shaped it now lie on the ground.

It was the successor of Hisham in the Umayyad dynasty, Walid II, a short-lived caliph described as extravagant, lover of poetry and refinement, who completed the precinct with rich interior decoration. Shortly after, an earthquake in 749 destroyed the magnificence that the Umayyads had displayed among more than 60 hectares of gardens and crops watered by an aqueduct in the middle of the desert. From the ruins of the sumptuous palace with mosques, surrounded by a large portico and fountains, the new vaulted shelter has emerged. 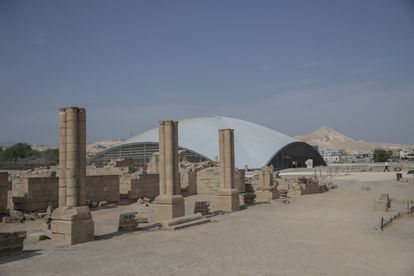 “These mosaics have spent more time buried and hidden than in public view,” details under the brand new dome Eyad Hamdam, provincial director of the Ministry of Tourism and Antiquities in Jericho. “Their discoverers covered them immediately so they would not suffer damage.” None of the human sculptures and statuettes, unusual in Islamic art, remain in the enclosure, which were located from 1934 in excavations led by the Palestinian Dimitri Baramki and the British Robert Hamilton. They were transferred along with other valuable archaeological pieces to the Rockefeller Museum in Jerusalem.

The Jordanian Administration, which succeeded the British in 1948, undertook a rehabilitation in 1966, when the sandstone pillars of the courtroom were rebuilt between the 38 sectors of mosaics that make up a continuous pavement. But a year later, the Israeli Army’s occupation of the West Bank caused the palace to once again fall into oblivion. “In 1994 the Palestinian Authority was established, although it was not until 2010 that work could begin,” recalls Hamdam. By then the monument was already at risk of disappearance. In 2016 the mosaics were displayed to the public for a short period before they were hidden again to address the covering works, the conclusion of which was postponed due to the pandemic.

Coinciding with the inauguration of the rehabilitation, the Palestinian authorities have reopened their borders to tourism. All are under the control of Israel, which has also lifted restrictions on travelers. Next year, they aim to beat the 120,000 visitor mark at Hisham’s Palace. “This place contains the essence of Palestine in stones of 21 colors,” says Hamdam in his double role as a tourist and antiques manager. “The black tiles come from Jericho; the red pieces, from Jerusalem and Bethlehem; the white ones, from Hebron and Nablus … ”, he enumerates, citing the main cities of the West Bank. The mosaic constitutes a unique archaeological treasure due to its state of conservation in its original location. 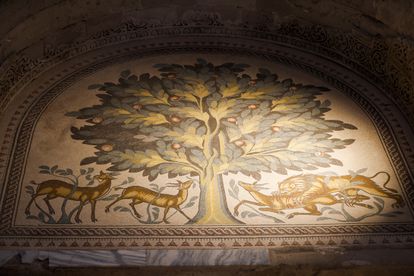 Mosaic of the Tree of Life, in the palace of Hisham in Jericó.ATEF SAFADI (EFE)

The diwan, a private room destined to receive the most special guests, it preserves one of the most unique mosaics: the so-called Tree of Life. Under an orange tree laden with fruit, the scene of a lion attacking a gazelle is represented on one side of the trunk, while two others graze placidly next to it. The director of the venue endorses the classic symbology that interprets the images as a struggle between peace and war, or between good and evil. Palestinians easily translate this unusual Islamic iconography, alien to images of people and animals, into their own everyday experience under Israeli occupation.

Most of the Jericho district is part of the so-called Area A of the West Bank, defined in the Oslo Peace Accords (1993) as exclusively controlled by Palestinian civilians and security. This has allowed the Palestinian Authority to recover part of its historical heritage thanks to international aid. This has been the case with the great mosaic in Hisham’s palace, which for decades remained covered by tarpaulins and earth.

On the outskirts of the same city, however, the two-thousand-year-old remains of the Herod’s winter palace They are located within the so-called Area C, 60% of the territory of Cijsordano that continues under exclusive Israeli control. Palestinian conservation and restoration interventions have not been able to reach this site, says the head of the Department of Tourism and Antiquities in Jericho. A situation of similar paralysis is experienced in the great Roman archaeological site of Sebastia, in the north of the West Bank, on the same border between the Israeli and Palestinian demarcation areas, and in which Unesco has drawn up a conservation plan together with the Palestinian authorities.