Oteiza and Chillida, face to face for the first time, in a “curative” show to bury the old enmity 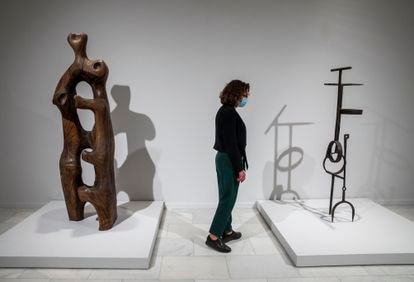 Sculptures by Oteiza (left) and Chillida (right) that begin the journey of the Bancaja de Valencia Foundation exhibition. Monica Torres

From the outset, no. This was the first reaction of the Jorge Oteiza Museum Foundation and Chillida Leku when they were asked to participate in the first face-to-face exhibition, without other artists, of two key figures in Spanish and European sculpture of the second half of the 20th century. . It seems that the embers of their old confrontation had not been extinguished 18 years after the death of both Basque artists. But then they thought about it and the two legacy institutions of Jorge Oteiza (1908-2003) and Eduardo Chillida (1924-2002) agreed to lend works for the unpublished exhibition Dialogue in the 50s and 60s, which has been presented this Thursday at the Bancaja Foundation in Valencia with 120 works.

This was explained to the press this morning by Javier González de Durana, from Bilbao, curator of the exhibition that can be seen until March. It is the sample of the “rapprochement, of the reconciliation of the artists, of their historical figures who seemed distant”, has asserted the professor of History of the University of the Basque Country. It is the “curative, healing” exhibition that has overcome “the enormous complexities of reconciling the two legacy institutions that had not collaborated in a common project,” he added. No representative of both has participated in the event before the media, although they did attend the official presentation in the afternoon.

Jorge Oteiza and Eduardo Chillida, in 1965, in an image that is exhibited in the Bancaja Foundation exhibition. Paco Marí / Photo Marín

González de Durana wanted to focus on the period between 1949 and 1969, when a “very intimate, very close friendship” was fruitful, with letters, documents, recommendations and “a great complicity in art and personally”. The exhibition exhibits a letter signed by Chillida and Oteiza in 1962 asking the Francoist Foreign Minister, Fernando María Castiella, for the freedom of the also sculptor Agustín Ibarrola, imprisoned in jail, and that of “the friends who were imprisoned by him.” to denounce “the inhumane treatment of the police,” as stated in the typed letter.

Timber Laocoonte of Oteiza and the iron carving de Chillida, in a position of equality, almost of brotherhood, despite their formal and material differences, receive the visitor on an exhibition tour that continues with the spectacular interventions of both sculptors in Arantzazu: the Apostolic the first and the doors for the basilica the second. There are some more pieces by Oteiza because more works on paper by him are included. “Everything is on a level of absolute equality. They both seem extraordinary to me, I have no preference. I have buried my taste ”, adds the commissioner. 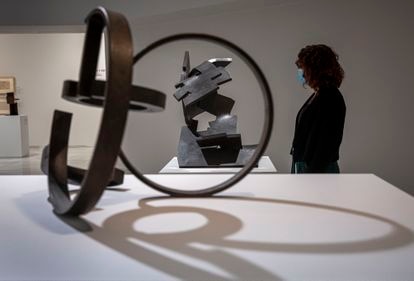 In the first place, a work by Jorge Oteiza from the series unemployment of the sphere 1957, and secondly, a work by Chillida, ‘Rumor sin Límites V’, from 1959. Mònica Torres

Despite their attempts to focus the issue on the friendly period, it was inevitable to ask about the reasons for the confrontation between the two and about the embrace of peace that occurred in 1997, in Chillida Leku. González de Durana has answered with a conciliatory spirit: “This expo revolves around the years of friendship and not of enmity. That hug had something of staging, of dramatization. There would also be a dose of sincerity. The reasons for the enmity were diverse: accusations were exchanged between them and in certain environments of whether there was copying or plagiarism … Trifles. All these artists breathed the spirit of the time, with the same questions ”.

“Ideas in the artistic world flow”, continued the curator. “Ideas go from one to another, one regurgitates them and the other drops them. There was also [en el País Vasco] a climate of political, social and ideological bipolarity. Both were instrumentalized, they were used as the spearhead of non-artistic interests, of ideological confrontation: one with the radical world [Oteiza], another with the Christian democrat world [Chillida]”. González de Durana has closed the enmity chapter with the following statement: “It is unforgivable that such a brilliant page in the history of art remains pawned and stained by a few quarrels of the people.” 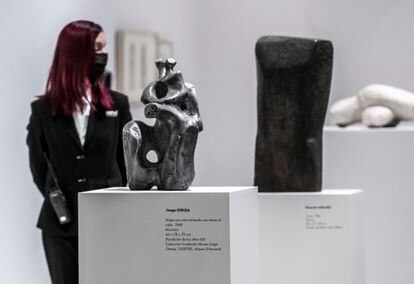 The curator has recognized the difficulty of organizing the exhibition in the Basque Country due to the “prejudices” that still exist, but he hopes that these will be overcome and even that the exhibition travels to the land of artists. For this reason, it has welcomed the proposal of Rafael Alcón, president of the Bancaja Foundation, to carry out the exhibition, which has also benefited from loans from museums such as the Reina Sofía, the Guggenheim in Bilbao or the IVAM in Valencia. Alcón has admitted that the gestation and development of the exhibition was “quite a challenge”, the result of which “has become a milestone”. “It has been a beautiful story of possible and impossible. Between what is possible and what is impossible, many times only reflection and work are distant ”, he added. The Basque Minister of Culture, Bingen Zupiria, and his Valencian counterpart, Vicent Marzà, confirmed their attendance at the official opening on Thursday afternoon.

Outside the exhibition room, Luis Chillida, son of the sculptor and president of the foundation that bears his father’s name, has admitted the initial reluctance and the impact that the exhibition proposal produced on them. “Well, then we reflect. It is necessary to reflect ”, has commented smiling.

Jorge Oteiza and Eduardo Chillida. Dialogue in the 50s and 60s. Until March 6 at the Bancaja Foundation in Valencia. From Tuesday to Sunday for 7 euros (general admission).

Line 4: Road Police implements an operation on Av. Adolf B. Horn for works on L4

More research into menstrual disorder after corona jab, no conclusion yet | NOW

Dina Boluarte: The Comptroller finds that the vice president committed a constitutional violation