In Nouvelle-Aquitaine, coastal communities faced with the challenge of erosion 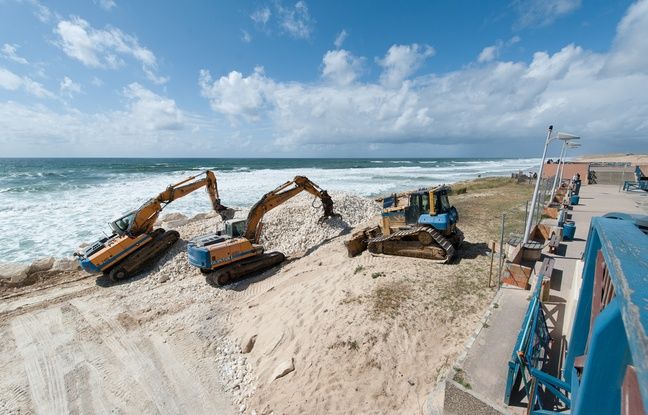 What strategy, and what means to implement against coastal erosion in New Aquitaine? At the time of the COP26, elected officials and regional scientists are in the process of waiting, while the models promise an acceleration of this erosion in the coming years, in particular because of global warming. “It’s the calm before the storm,” said Nicolas Castay, director of the
GIP (Public Interest Group) Littoral Nouvelle-Aquitaine.

Coastal risk research engineer for the Observatory of the coast of Nouvelle-Aquitaine and the
BRGM (Bureau of Geological and Mining Research), Alexandre Nicolae Lerma would like to point out that the phenomenon of erosion on the Atlantic coast is “above all a geological phenomenon”. “Coastal erosion dates back to the end of the last ice age, around eighteen thousand years ago. Since then, the rivers have carried less sediment and the contributions of sand are gradually reduced. “

“Very problematic situations in the Nord-Médoc”

In a movement of perpetual renewal, the sand carried by the rivers arrives at the level of the Gironde estuary, and descends along the 230 km of coast towards the south of the Bay of Biscay, to the sub-canyon. sailor from Capbreton who “sucks” this sand. “However, the source coming from the mountain ranges is drying up, and, consequently, the sand stock on the coast decreases, this is what generates erosion, the Gironde being in the front line” continues the engineer.

On the front line, the Gironde could be, over the next few years, the French department most affected by erosion. “In the Nord-Médoc [de Lacanau au Verdon-sur-mer], we are experiencing very problematic situations, with shoreline setbacks of 5 m per year, up to 10 m in certain winters, ”warns Alexandre Nicolae Lerma. On average, the decline is around 2.5 m per year on the Gironde coast, and 1.7 m on that of the Landes.

To this natural phenomenon, “we must add human activities, such as the installation of dams on waterways which reduces the circulation of sediments” continues the engineer. If the effects of global warming on erosion are still difficult to quantify, “the winter storms which intensify, and the rise in sea level which will probably attack the dune a little higher by 2050” are so many warning signs “which let us think that we are heading towards an acceleration of erosion”.

On the scale of the former Aquitaine, 5,800 housing units are to date threatened by the decline of the coastline by 2050, “if we do not take into account the protective structures or the preservation policies. , and 580 if we take them into account, ”explains Nicolas Castay. The GIP Littoral thus coordinates ten local management plans for the coastal strip in the region, the purpose of which is precisely to protect the structures and attempt to slow the effects of erosion.

The community of communes of the Great Lakes, in the Landes, established its strategy in 2018, which is based on three pillars: “Support for natural processes, gentle active control [c’est-à-dire le rechargement des plages en sable] and the relocation study of three properties which are on the front line in Biscarosse, the Grand Hôtel de la Plage and two twin villas [découpées en appartements], threatened in the relatively short term ”, presents Vincent Bawedin, project manager for the management of the coastline to the community of municipalities.

The community has been reloading the beach with sand since 2001. “Without this, it’s a safe bet that these buildings would no longer be in place, and that the population could no longer enjoy such a comfortable seaside resort in summer,” said Vincent Bawedin. This “flexible management” of the coastline consists of “going to take sand from a place where there is more of it, to bring it back to where it is most needed, in order to attenuate the blows of winter storms”, sums up Alexandre Nicolae Lerma.

Buy back buildings to rebuild them further

A tougher management of the coast is to install stone dikes. This is what was done by private owners in Biscarosse in the 1980s. “But this dike deteriorates over time, and a new dike would certainly allow the three buildings to remain in place, but would accentuate erosion. on both sides, to the point of threatening parking lots, as well as businesses and homes in the medium term, ”says Vincent Bawedin. “We can continue to put dikes on the seafront, except that this has well-known perverse effects which are to cause an increase in erosion at the edge of these developed areas, and to disfigure the landscape”, adds Alexandre Nicolae Lerma.

This is why the relocation strategy is favored in Biscarosse, for the three buildings concerned. The idea would be to buy them back and rebuild them later, to the chagrin of some owners. “It is not out of cheerfulness, nor a whim, but it is better to anticipate and relocate, rather than going to pick up building debris on the beach,” said Vincent Bawedin.

Several elected officials are calling for a new financing mechanism

The city of Lacanau, in Gironde, has opted for the construction of a riprap of stone blocks which should fix the dune over 1 km until 2050, before starting the scenario of relocation of buildings from the front of sea. “To each his own strategy,” considers the director of GIP Littoral. In some cases, protection remains the solution, as in Lacanau, in other situations relocation is immediately considered, as in Biscarosse, even if the acquisition phase is complicated, because we do not know how to finance. Take the example of the acquisition of Signal in Soulac, which took a long time. “

Member of Parliament (LREM) for the Arcachon basin, and president of the office of the National Council for the Sea and Coastlines, Sophie Panonacle published a column in mid-October in which she denounced “funding for the adaptation of coastal territories to climate change that is happening in small quantities ”, despite the new Climate and Resilience law, promulgated this summer.

“No lasting solution is committed to respond to a scenario of active struggle (hard protection) or a scenario of strategic withdrawal (relocation and renaturation)”, regrets the deputy. Several elected officials from the coast are now asking the State for a new funding mechanism to support their strategies.