“Jersey is in the middle of a battle that is beyond it”: the Channel Island in the uncertainty of tensions over fishing licenses 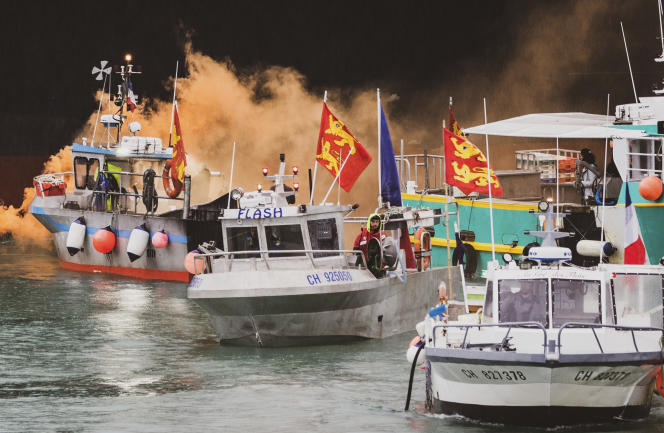 French fishermen angry at the loss of access to the waters demonstrate off the island of Jersey in May 2021. OLIVIER PINEL / AP

Faced with the onslaught of rain and squalls, Steph Noel gave up going out to sea, Monday, November 1, to fish for crustaceans and lobsters for which Jersey waters are famous. His 8-meter-long boat, the Bellbird, remained firmly attached to the docks of the city of Saint-Hélier, like the entire flotilla of the Channel Island, waiting for a clear sky. “Maybe later in the week”, hopes Steph Noel, 52 years old, including thirty-five years to deposit his records in the direction of the coast of the department of Manche, located about twenty kilometers.

The weather may allow Jersey fishermen to go out to sea this week, but France could decide otherwise. The ban for Breton and Norman ports to accept the product of their fishing figures among the measures brandished by the government to protest against the number of licenses, considered too low, granted to French vessels to allow them access. to the territorial waters of the British Crown’s dependence. France also plans to systematize customs controls and threatened, at the end of October, to “review the energy supply” provided by EDF in Jersey.

Pending the outcome of the ongoing discussions between the United Kingdom, Jersey, France and the European Commission, the Aqua-Mar fishmonger has decided to suspend its activity as long as there is a risk that its merchandise cannot be sent from the other side of the Channel. Main intermediary between local fishermen and the mainland, the company, located in the port of Saint-Hélier, this year sold a large part of its 420 tonnes of seafood in Saint-Malo (Ille-et-Vilaine) .

Read the report: Article reserved for our subscribers Between the fishermen of Jersey and Cotentin, the cumbersome neighborhood of Brexit

“We need you more than you need us,” says founder Tony Porritt, sitting in an office adjacent to the shellfish storage tanks. Before the departure of the United Kingdom from the European Union (EU), 80% of the fishing vessels present off Jersey flew the French flag. For its part, the island depends 80% on France to sell its cakes, whelks or spider crabs, from where they are exported throughout Europe. In his forty-year career, the now retired has always maintained good relations with his French colleagues. “The question goes well beyond the fishing industry,” he regrets. Jersey is in the middle of an overwhelming battle. “

The island has never been a member of the EU and its inhabitants were not invited to participate in the Brexit referendum. The Granville Bay agreements, signed in 2000 after ten years of negotiations to pacify relations between fishermen in the area, were swept away by the treaty regulating relations between the EU and the United Kingdom following the divorce. “The text enacts a simple rule: a boat which fished for more than ten days a year in Jersey waters between 2017 and 2020 has the right to obtain a license”, explains Gregory Guida, Assistant Minister of the Interior and of the island government environment.

At the wheel of his car, the chosen one takes us north of Saint-Hélier, to the building housing the island’s maritime affairs office. Dozens of Norman and Breton fishermen would like to be able to come and defend their case, and for good reason: it is here that the decision whether or not to grant licenses to French vessels is decided. Since January, the regional fishing committees, like several members of the government, have been increasing criticism of this procedure and accusing Jersey of having voluntarily limited the number of licenses granted. As of November 1, 113 definitive licenses have been issued, when the French Minister of the Sea, Annick Girardin, requested 169.

“We moved heaven and earth to obtain licenses for these boats”, pleads yet Paul, responsible for the management of coasts and marine resources – the officials met did not wish to see their name published. The French rantings provoked, in the scientist and his colleague Dave, a real incomprehension. “We had no number of licenses in mind at the start, assures the latter, since the post-Brexit agreement requires to maintain a fishing effort equivalent to what existed. But the text also asks for proof and in many cases it is not sufficient. “

Read also Article reserved for our subscribers Fishing: after Brexit, storm warning in the North Atlantic

The geolocation data, progressively transmitted by the French authorities, made it possible to validate 70 definitive licenses. For 43 other boats, additional information had to be crossed. The fishing records – a mandatory document in each vessel, provided for by the Granville agreements – as well as the quantities of fish caught and then those landed in French ports were used. “We also added our inspection reports. A boat checked at sea is proof that he fished that day, ”explains Dave.

Forty-nine vessels have obtained temporary licenses on the basis of data from two French fishing activity census programs, Sacrois and Valpena, whose methodologies are at the heart of disagreements with the French authorities. “For the first, it is a statistical estimate of the presence of boats in our waters; for the second, it is a retrospective monthly survey completed by the fishermen. We do not consider this evidence to be sufficient, ”said Paul.

The cumbersome procedure for sending data also weighed on exchanges: each document sent by a French fisherman had to pass through the French authorities before being validated by the European Commission and then sent to London for consultation, before, finally, that Jersey officials can access it. For fifty-five other ships, registered on the “red list” of the authorities, the investigators say they are deprived. “We have almost no information about them. Are we going to have to cheat so that the French get what they want? », Exasperated Gregory Guida.

In the port of Saint-Hélier, some professionals believe that their government has been too generous towards France. “I think there are too many licenses granted, that can endanger the fish stock,” says Steph Noel. “I take my hat off to the French,” quipped Louis Jackson, owner of the Fresh Fish Company, “for having won so much while managing to lose nothing”. For its part, the island’s fishermen’s association was already pleading, long before Brexit, in favor of reclaiming the sea near Jersey for the benefit of local players. “Guardians of our waters” has become one of their slogans.

Between the concern of the inhabitants and the French anger, the Jersey government has been playing the legalism card since January, constantly referring to the procedures detailed in the post-Brexit agreement. “We have always approached this file as a technical problem to be solved, never as a political question. This could change if action is taken against us, ”John Le Fondré, Chief Minister of Jersey, told Le Monde. Its Minister of Foreign Affairs, Ian Gorst, agrees: “Today is a day to speak. We hope this will still be the case tomorrow. “

5.9 earthquake hits Indonesian island of Sumatra off the coast

Dracula, prince of darkness and king of pop

Dracula, prince of darkness and king of pop