COP26: where is the Paris climate agreement, six years after its signature? 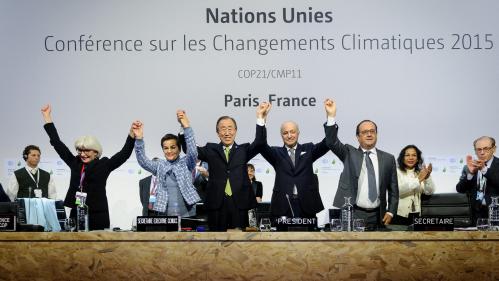 It was in 2015. At the podium, Laurent Fabius, then Minister of Foreign Affairs, adopted, with a blow of a green hammer and to applause, the Paris climate agreement (link in PDF). The objective is ambitious: to contain “the rise in the average temperature of the planet clearly below 2 ° C compared to pre-industrial levels”, ideally below 1.5 ° C. Six years later, the euphoria of Paris has subsided and the objective remains distant, as UN Secretary General Antonio Guterres recalled in September: “The world is on a catastrophic path towards +2.7 ° C of warming “.

Should we therefore conclude that the agreement is a failure? Franceinfo takes stock, as the COP26, the annual meeting of states to fight climate change, opens on November 1 in Glasgow, Scotland.

By entrusting each country with the task of establishing themselves, and à la carte, the height of their commitments – via “Contributions determined at the national level” (NDC) -, the Paris agreement has revolutionized the modus operandi of the United Nations Framework Convention for the Climate.

“With the NDCs, the basis of the Paris agreement is fundamentally voluntarist. There was no longer any question of a treaty which fixes the commitments and constraints from above, and which only applies to certain countries. , but to let the States decide their ambitions in full sovereignty, explains the historian of climate negotiations Amy Dahan. Suddenly, everyone was on board, with this obligation to raise ambitions regularly. “

But at the time of the assessment, if “the countries undertake to do what they think they can do”, Sandrine Maljean-Dubois, research director at the CNRS within the Center for International and Community Studies and Research (Ceric), is alarmed by “the insufficiency of ambitions”.

In September 2021, selon l’ON, the sum of the contributions of the 191 signatory parties thus led to a 16% increase in global greenhouse gas (GHG) emissions in 2030 compared to 2010, resulting in a “catastrophic” increase in the temperature of around 2.7 ° C by the end of the century. “Today, we do not have enough new NDCs more ambitious than those submitted six years ago,” regrets Sébastien Treyer, Director General of the Institute for Sustainable Development and International Relations (Iddri). While the EU has revised upwards its commitments, going from a target of reducing these emissions from 40% to 55% by 2030 compared to the 1990 level, “some countries, such as Australia, Brazil, Mexico or New Zealand say they cannot make additional efforts “.

“You can always see the glass half empty or half full. The commitments are clearly insufficient, but it is much better than what would have happened without the Paris agreement, a trajectory towards a world of + 4 ° C. They’re not the same people at all, let’s not forget that. “

Some of the biggest emitting countries, like India and China, are not shining in their eagerness to rectify their trajectory. But some of their progress is not reflected in the NDCs, continues Sébastien Treyer, who notably cites the debates in India in favor of photovoltaics or recent arbitrations by the Chinese government to the detriment of the coal sector. Small steps for the international community, but a big signal sent to the fossil fuel industries. “With the collective dynamic that it impels, the Paris agreement has had effects on internal political debates which may be ahead of the filing of an NDC”, explains the expert. However, he recommends waiting for 2023, the date provided for by the agreement for a first point, before making a more complete assessment.

National policies that are too timid

Insufficient, these commitments are also rarely implemented for the moment. According to the indicator Climate action tracker (in English), the current policies lead us towards a world at + 2.9 ° C (compared to 2.4 ° C if all the commitments are kept, according to the evaluation of this consortium of NGOs and scientists). According to this same indicator, only one country is currently aligned, both by its policies and its commitments, with the 1.5 ° C ideal mentioned in the Paris agreement: Gambia, this African state neighboring Senegal.

Even France, homeland of the agreement, is not one of the good students. Certainly, laws – on the energy transition for green growth in 2015, the Climate and Resilience law in 2021 – have been adopted. But, as recalled by the High Council for the climate in its last annual report (link in PDF), “overall, public policies are not sufficiently aligned with the orientations of the National Low Carbon Strategy”, the roadmap that our country has adopted to reduce its GHG emissions. The same body had ruled that the Climate Law, the flagship text of the five-year term on the subject, would “not allow France to catch up in the low-carbon transition”.

“The government says it has done the maximum in the Climate Act, but everything has been mitigated. There are double talk all the time and everywhere.”

In the USA, biggest GHG emitter in history, the start of Joe Biden’s mandate was marked by the country’s return to the Paris Agreement. But the plans of Donald Trump’s successor are for the moment blocked by Democratic Senator Joe Manchin, a former coal professional whose vote is essential to obtain a majority in the upper house. This elected representative seeks, for example, to reduce les ambitions du Clean Electricity Performance Program (in English), a program of fines and subsidies to promote renewable energies, and to include gas, a fossil fuel less polluting than coal, but more than wind or solar.

For its part, China, a country which replaced the United States in 2006 as the leading emitter of GHGs, continues to build more coal-fired power stations (PDF, in English) that other countries do not close.

Other countries do not respect their NDCs, but they have an excuse. In 2009, in Copenhagen (Denmark), developed countries had committed to allocate 100 billion dollars (86 billion euros) each year to finance the transition in developing countries. The logic is simple: the industrialized countries, historically responsible for global warming, must help the countries whose responsibility for this crisis is weak to fight against its devastating effects. “A part of the NDC is conditioned on international aid, it is a part which is a little on quicksand”, analyzes Sabine Maljean-Dubois.

Because this promise, however recalled in the Paris agreement, is still not kept: in 2019, we painfully reach around 79 billion dollars (68 billion euros), according to the OECD. For’ONG Oxfam (link in PDF), the amount of this funding amounts to 51 billion euros per year, on average, in 2017-2018. Worse, a large part of these funds is not given in the form of grants, but in the form of loans, which further increase the debt of these countries. Real aid would therefore be between 16.3 and 19.3 billion euros per year, estimates the NGO. Under these conditions, “the question is whether we will succeed in keeping the confidence of the countries of the South. [dans l’accord de Paris], because to keep the 2015 deal alive, they must not be lost in the momentum, ”notes Sébastien Treyer.

For the moment, many of the ambitions displayed by developing countries, in terms of adaptation as well as in terms of decarbonizing their energy, depend on this aid. For example, Morocco’s GHG reduction targets drop from 45.5% by 2030 to 18.3% without external aid. In Nigeria, this rate goes from 47% to 20%, and in Mexico, from 36% to 22%.

The scope of the Paris Agreement is not limited to politics, however. “On a symbolic level, he played a fairly important role. He confirmed the fact that we were going, one day, to turn our backs on carbon,” analyzes researcher Sandrine Maljean-Dubois. It has become a reference for many companies, which integrate it into their communication and, sometimes, into their decision-making. “Since 2015, the finance sector has really transformed its relations with players in the real economy, with the idea that climate risk is becoming important in the assessment of a project”, believes Sébastien Treyer.

According to him, the Paris agreement, which prompted 70 states to post a carbon neutrality objective by 2050, “was extremely structuring, in the sense that the actors in question now say to themselves that they will not be competitive in the markets if they do not align “.

“Private and public actors are starting to think that the inconsistency with the goals of the Paris Agreement could at some point bring them face to face with climate liability in court.”

In fact, despite some ambitious statements from multinationals such as BlackRock (specializing in asset management), companies are still a long way off: in March, NGOs noted in a report that fossil fuel funding had increased since the signing of the agreement. In September, l’ONG Reclaim Finance (PDF) revealed that between 2016 and 2020, banks, including BNP Paribas, had financed 270 billion euros for oil and gas projects in the Arctic.

Environmental NGOs and local communities, for their part, are relying on the agreement to take states that do not do enough to reduce their emissions to court. “This is an argument very often used by applicants, and the judge uses Article 2, which sets the overall objective, to make States face up to their responsibilities”, notes Sandrine Maljean-Dubois. In the litigation of the Affair of the Century or of Grande-Synthe, named after this northern coastal town which seized the Council of State to demand more action against climate change, the agreement is one of the texts used. by the administrative judge. These procedures could force, as in Germany and France, the States to review their copy.