A Brazilian Blessed Against Femicide 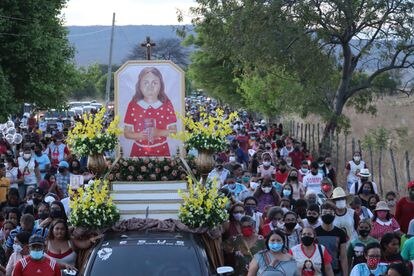 Pilgrimage for the girl Benigna, in the process of beatification, in Santana do Cariri

Benigna Cardoso began the afternoon of October 24, 1941 as usual: she took a clay pot and went to the well near her home, on the Oiti farm, to fetch water. Orphan of a farming couple, the 13-year-old girl had been adopted by a woman in the town of Santana do Cariri, in the Brazilian state of Ceará. Those days she was quieter, she was afraid of the teenager who was harassing her. He had told his grandmother and the priest of the local church that Raúl kept insisting, but it never occurred to anyone to ask for protection against a 17-year-old who seemed “normal”. They only advised him to change schools so that he would not have to meet his classmate. But it was not enough. Late that afternoon in October, the boy tried to rape her while the girl was going for water and killed her. Eighty years later, Benigna is on the long road to sanctification through the martyrdom she suffered. Every year pilgrimages are held in his honor, attended by victims of sexist violence who ask for miracles in the face of the ineffectiveness of Brazilian public protection policies.

That October 24, Benigna resisted as much as she could to the harassment and the blows of a machete that Raúl inflicted angrily on her hands, neck and face until she was practically severed. But the religious girl, who did not let her classmates pull leaves from the trees and offered her own hands to free her friends from being beaten at school, ended up murdered. In such a brutal and shocking way that the community gave a new meaning to that femicide and began to see her as a saint because of the martyrdom she suffered. Raúl confessed to having committed the crime because Benigna had rejected it and served his sentence. “Women cling to the saint in similar moments, they ask her to intercede for them, in order to survive the violence. And they say that he has granted them some graces. Faith and religiosity are also present in this context in the region. They revere Benigna in these circumstances, ”says Grayce Alencar Albuquerque, coordinator of the Observatory of Violence and Human Rights of Cariri, of the Regional University of Cariri.

The Benign girl, as she is known, is now at the end of the process for the Vatican to beatify her, the last step before beginning the canonization process that could one day officially make her a saint. If for decades she was considered a symbol of chastity for resisting rape, now she is also an icon of the fight against a crime included in the penal code only many years after her death. Femicide continues to be a serious problem in the state where she lived. Between January and September of this year, 13,690 women reported sexist violence in Ceará. And 22 murders were registered as femicides, according to the official statistics of the Ministry of Public Security, which never reflect all the cases. In the last year, 320 women were murdered in the state. Now, the day of Benigna’s death is, by law, the state day of the fight against femicide. 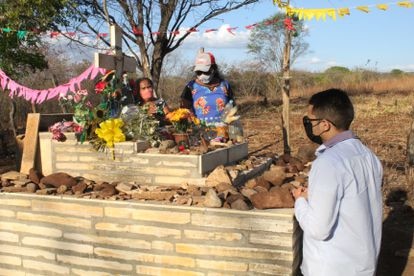 Some pilgrims pray before the tomb of Benigna. José Luiz and Ypsilon Félix (Personal archive)

“That crime shocked the entire community. People are still affected by what happened, ”says Ypsilon Felix, organizer of the pilgrimage and member of the commission that, for five years, gathered information to take to the Vatican. In the last pilgrimage, on October 24, he showed EL PAÍS the testimony that a woman recorded during the walk. She had left the neighboring state of Pernambuco to escape her husband’s violence. For years she was unable to see her daughter, but she escaped alive from the suffering she shared with the girl Benigna. Later, he returned to Santana do Cariri to ask him to cure his granddaughter of cancer. That day I was there to thank him for the miracles he had done. “There are thousands of testimonials like this,” says Ypsilon.

The rate of women murdered in Ceará is almost double that of all of Brazil. According to the Brazilian Public Security Forum, last year seven out of every 100,000 women were murdered in the state, while in the country the average was 3.6. Benigna lived precisely in one of the most critical regions of Ceará, Cariri, where in recent years several women’s groups have been created to try to change this reality. The image of Benigna sanctified by the population has served to discuss and demand public policies that go beyond offering shelter and are capable of preventing this type of crime.

“The story of the Benign girl portrays what we still live in: machismo, patriarchal culture and misogyny, which tend to place women in a situation of inferiority. Women are still considered the property of men, ”complains Grayce Alencar. According to her, in Ceará these crimes have not only increased, but they have also moved to the interior, where there is more social inequality and poverty, which increase the dependence of women. There, women have great difficulty understanding the violence with which they live. “We need more investment, policies and laws to change this perspective, which has a cultural factor. We know that it is a slow and continuous process ”, adds the researcher.

Meanwhile, Benigna continues to attract people from all over the country to her sanctuary. In 2019, Pope Francis approved his beatification, but the ceremony was postponed due to the pandemic and still has no date. In Cariri, the girl is already a saint. But her story goes beyond religiosity, as Ypsilon defines: “Benigna has become a symbol of resistance and respect for women.”