Glitter, heaters, ghosts, ‘drags’, carding and songs in the rain: marathon of musicals from Madrid to Barcelona

Madrid’s Gran Vía was a party on the last Pilar bridge. Good weather, crowded shops, free seating in bars and crowds of tourists like before the pandemic. Many of them with the clear objective of seeing some of the musicals that have finally been re-represented on the so-called Spanish Broadway or in other theaters specialized in the genre after the long break due to the covid. Practically everyone has done it in the last month, both in Madrid and in Barcelona, ​​as if an invisible referee had fired the starting gun: Tina, Grease, Ghost, Kinky Boots, The Full Monty, A Chorus Line, We Will Rock You, Cantando bajo la lluvia, Fama and Billy Elliot, in addition to the return of the fireproof The Lion King, some that comes from the summer, like Golfus of Rome, and other more cabaret shows, such as The Hole X O Wah.

The avalanche creates stress among musical enthusiasts. They, too, seem to have been waiting for the starting gun, but tickets to this type of show are not exactly cheap and few wallets are capable of digesting so much new offer at once. In any case, for now they are not lacking spectators. Huge theaters with up to 1,500 seats are full every day and the pre-sale goes like a shot.

In the entrance queues you breathe excitement. Addicts to the genre have rushed to buy tickets and lovers of the genre have also rushed revival. Those who grew up watching the series Fame or that they hallucinated with the movie Grease. Those others that every time they throw Ghost on TV they can’t help but see it again and those who know the songs by heart Singing under the rain. Of course, also the fans of Tina Turner or Queen. This year’s card seems to be designed for them. It is a type of public that does not want surprises, but is given exactly what it expects to find. To relive happy times before the pandemic or perhaps just to listen to an old song that excites you live. The very character of Vince Fontaine, the radio host who runs the dance contest in which the protagonists of Grease, He explains it in a parliament added to the version that has just been released at the Nuevo Teatro Alcalá in Madrid: “One day you are in high school with your friends, with your loves. You close your eyes, you open them again and suddenly 20 years have passed and your life has changed so much that you no longer recognize yourself. What you do recognize is the music that you danced and sang at the top of your lungs ”. 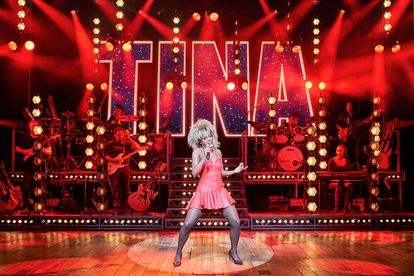 A moment from the musical ‘Tina’ Manuel Harlan

That is one of the reasons that explain the great popularity that the genre has been gaining in Spain. An eloquent example is Tina, the musical that reviews the life and songs of Tina Turner, premiered in 2018 in London and now replicated at the Coliseum theater on Gran Vía in Madrid. In the night performance of October 11, in the middle of the Pilar bridge, already in the lobby it could be seen that most of them knew their songs by heart. Many 50-year-old couples, groups of friends wanting to forget the pandemic, leopard prints and some spectacular carding in tribute to the singer.

As soon as the lights go out, chords are heard that their devotees can immediately recognize as the start of The Best, one of her greatest hits, as the curtain rises and her iconic silhouette with lioness fur and miniskirt is seen from behind, as if she were about to start a concert. The show has barely begun, but the spectators go from zero to one hundred in seconds, bursting into applause and holding back so as not to dance too much in the seats. But it is a false alarm. The curtain falls and when it rises again, the protagonist appears as a girl singing in the church of her town. We rewind to learn about her tough childhood, how she met Ike Turner and how he mistreats her in some pretty explicit scenes. So when she finally rebels, viewers throw up another round of applause. In all this first part his best-known songs are not heard, but those of his time with Ike and also translated into Spanish, so there is a certain anxiety among the public to go from the Tina subjected to the times of soul to the star of rock owner of its destiny. That is the one they want to see. That comes after the break. The artist reinvents herself, works her new style and everything goes growing, until the great moment arrives that returns us to the beginning: The Best, now yes, in English with the band on stage and the powerful voice of Astrid Jones, who alternates in the role with Kery Sankoh. Encores, catharsis and everyone standing in the stalls. The fans leave happy and loving their diva even more.

Returning to Vince Fontaine: “Oh, who could be 18 again and enjoy, live and get excited like they do. But maybe it’s not necessary, right? […] You long for a past time that you thought best. You felt free. So what do you want to feed on today? Memories or the hunch that life presents to you every second? The only moment is here and now ”. This is the spirit that permeates the new Grease from Madrid, directed by David Serrano, also creator of the successful Billy Elliot, premiered in the capital in 2017 and now on the bill in Barcelona. It is evident that that story of tough boys and girls with their brains stunned by the idea of ​​romantic love feels out of date today, which is why this new look that introduces montage through Fontaine’s gaze between nostalgic and ironic is very successful. 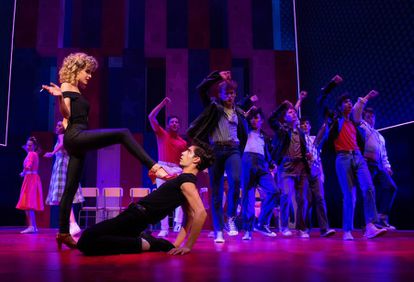 The most anticipated scene of ‘Grease’, in the production directed by David Serrano.Javier Naval

Otherwise, Grease it continues to work wonderfully: the aesthetics, the choreographies and even the songs in Spanish, very well translated and adapted by David and Alejandro Serrano, are interspersed with good rhythm between the spoken parts, and the audience applauds everything with enthusiasm. There were several amazing moments: the dance on the car in the mechanic shop with the theme Greased Lightning and, of course, the ending, in which the protagonist, Sandy, empowers herself and takes command of the relationship dressed in a leather jacket with the song You’re The One That I Want in the Spanish version). Maybe that’s why Grease It was always a very “girlish” musical. At the performance on Saturday, October 9 (we are still on the Pilar bridge), women predominated and many of them seemed to be accompanied by their daughters. Perhaps so that the young women will also keep a happy memory with their mothers associated with those songs in the future. At the end, encores in English to finish off the revival and all the public standing.

Perhaps a more up-to-date vision would have also served the new adaptation of Fame, which is performed at the Apolo theater in Barcelona. Directed by Coco Comin, the production remains faithful to the original released in the late eighties in the US (based on the 1980 film that later became a series) and enhances the musical numbers in front of the dialogued parts, with spectacular choreographies that They go through different styles of dance, very well executed by the interpreters. Of course, when the most famous parliament of the libretto arrives, the one that says “fame costs and this is where you are going to start paying”, you cannot hear or breathe in the stalls. At the end of the day, it is what the most fans expected, as well as the main theme of the film, Fame, which of course is repeated at the end of the show in English. Another catharsis and a standing audience.

Everything is very well balanced, however, in the new production of Singing under the rain, Directed by Àngel Llàcer and Manu Guix, recently premiered at the Tívoli in Barcelona. The spoken scenes, the musicals, the choreographies, the translations of the lyrics of the songs, the scenography. The work of the interpreters also stands out, who act with the same naturalness and efficiency with which they sing and dance, something that is not easy to achieve: the same height is not always reached in all three facets. Another great virtue of this show is that it overcomes the temptation to stay in the pure nostalgia of the film on which it is based, starring Gene Kelly in 1952, to become a celebration of love and life through songs known by everybody. By the time the song arrives in the rain between lanterns (real water is falling), the audience has already forgotten about Gene Kelly and is dedicated to enjoying the present. The “here and now”, as Fontaine used to say. Audience standing at the end of the performance on October 17. 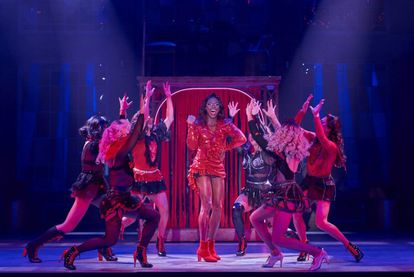 Tiago Barbosa, in the center, in ‘Kinky Boots’.

Back in Madrid, we jump back in time. Kinky Boots, a title never seen before in Spain, inspired by the 2005 film of the same name (translated as Stepping strong) and first released in 2012 in Chicago. It is represented in a large marquee installed in the Espacio Ibercaja Delicias in Madrid. The music and lyrics of Cyndi Lauper, which is already an attraction for the legion of followers of this artist, but in this case it is about little known topics. Despite this, many viewers also come to this musical with clear expectations: this is the story of a star drag that inspired a shoemaker to make high-heeled boots that support men’s bodies, and they want to see a real star drag on the stage. It is Tiago Barbosa, a magnificent interpreter who in 2013 was named the best Simba of The Lion King of the world, who feeds the public with his interpretation and raises merriment in the stalls every time he appears. The production, which also features the media voices of Angy Fernández and Daniel Diges, is generally experienced as a party and the applause often interrupts the performance.

But for the media, David Bustamante. Signed as a great claim on the return of Ghost to Madrid’s Gran Vía, alternating with him too triumph Ricky Merino, shines more in musical moments than in dialogue scenes, as expected. But he does not disappoint his followers: the script continues to have a hit and the public is happy listening to the star theme of the montage, Unchained Melody, from The Righteous Brothers, sung by his idol.

The musical marathon could go on with The Lion King, if there is anyone left to see it after 10 seasons on the bill. Or the Antonio Banderas production of A Chorus Line, just landed in Madrid after its premiere in Malaga. The Full Monty, We Will Rock You, Golfus de Roma, Who Cares, The Call (another fireproof), the new Billy Elliot from Barcelona, The bodyguard and even one that revives Whitney Houston in hologram. There is something for everyone. The journey that this report narrates lasted a month and did not cover so much.