Explain to the sovereign 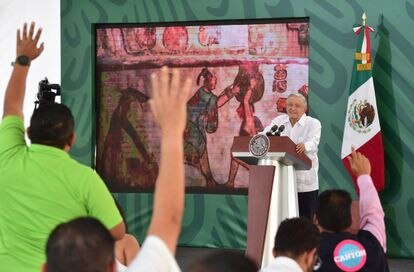 López Obrador, this week at a press conference.

Morena’s emerging president speaks in public more than his predecessors – and perhaps more than any ruler in the world. Butdice more than other Mexican leaders, or even foreigners? And what dice Is it relevant? Does it make sense? Is it productive or at least to democracy?

It is natural that many dedicate (we dedicate) time and energy in the attempt to unravel the incessant messages of the head of the Executive. But with AMLO it happens that not a few listen to his sayings and, in a singular way, find coherence, depth or even legitimacy. And they publish it.

Then everything seems to add up. It does not matter if it is a presidential disqualification of the doctors, whom he called mercenaries out of nowhere, or to cry out for a shake-up at UNAM. And it doesn’t just happen with respect to presidential sayings. A similar exercise, of course, is undertaken by some to find logic in decisions that go along a course (militarization, for example) that many of those same explainers reviled in the not too distant past.

But let’s go back to the sayings. Lines above, I used the singular term because when López Obrador says something, the gear of a certain public opinion starts to move, overlooking a couple of well-proven situations: in each speech of the Tabasco there are dozens of untrue or unsupported assertions; and that whoever speaks more than honoring the figure of head of state is employed as the leader of a movement, not a country.

There begins the fallacy of some explanations about Andrés Manuel. His explanators dismiss the fact that the morenista many times lies when arguing something – now with the UNAM he has done it repeatedly – and that his expressions are not framed in any format of dialogue or exchange of ideas (it would be too much to ask) between the most common man. powerful of Mexico and whoever is referred to: institution or person, it does not matter.

How good that Andrés Manuel has someone to explain it, because otherwise it would be relatively easy to see how his arguments are intrinsically flimsy, unsustainable despite the insistent repetition of each morning, and little edifying even if they want to justify them from the “good motivations ”of the president.

The president has the right (we talk more about his rights than his obligations) to propose improvements in any aspect of national life. But its obligation is not to create artificial or risky problems, but to use the many resources at its disposal to devise, and promote, improvements.

The National Autonomous University of Mexico is the president’s new target. He has been criticizing the highest house of studies for two weeks. Does anyone doubt that the UNAM is imperfect? It carries problems and challenges that are beyond the scope of this column and this author. Is it a good idea to drive an improvement in our flagship educational institution? Always. Is lies and disqualification the best way to activate a profitable exercise in modernization?

In the exercise of authority, having good intentions is not enough, by far. It is the results, and the consequences, of what is said, of what is done or not done, based on those motivations, the only thing that counts. Nothing more.

Even if AMLO felt disappointed that the maximum house of studies is not in sync with his agenda, is that really a justification, or even an acceptable explanation, for this behavior of the tenant of the National Palace?

The explainers do not want to see, among other things, that in his crusade against the UNAM the president has obvious conflicts of interest: it is not only the president who does not change a comma in the budget in San Lázaro and therefore who has the hand the key to the money for the Rectory, but it is known that groups related to him aspire to control University City (the latter may be legitimate, but is the help from the Palace?). And speaking of the latter: would it have seemed “explainable” to us that Fox gave UNAM a “shake-up”? That someone clearly linked to his project – if there was one – had joined the ranks to direct that house of studies in order to “Accompany the change”?

Equally, it is disconcerting that his explaners ignore the presidential record: in these explanations does not prevail a judgment that arose from the evidence, but from the illusion. They are texts that convey a spirit of congratulations that the president has decided to roll up his sleeves to “improve” the UNAM, a company that does not have support in the capacities shown until today by this government. Would you entrust the government of Saint Lucia with a CCH?

We explain the behavior – the frustration or even the quarrelsome mood – of AMLO from its logic instead of doing it from the logic of the should be of the institutions. When he was a candidate, and even as head of the government of Mexico City, a contestatory López Obrador was functional for Mexican democracy. But what is virtue in an opponent can be a great defect in the one who has the maximum power. It is the sovereign we are talking about.

A similar thing can be pointed out from the explainers. The ability to cause harm on the part of a candidate is limited by the institutions. Hence, without justification and without fault, perhaps various analysts weighted more what AMLO / opponent contributed even if his behavior was inconsistent or erratic. But a Mexican president should not be given such licenses. Limiting it is for the good of society and of the government itself. Trying to always justify it because someone finally put the poor / anti-corruption agenda first is a disservice to democracy.

The bad of the good

The conference last Wednesday, in which the way in which pensions for those over 65 years of age will be increased to reach 3,000 pesos a month was detailed, is a good example of what AMLO is failing.

Those pensions are unquestionable, it is justice that it is late but fortunately seems irreversible. However, what is responsible now, for the president, his party and everyone else, is that such a good intention does not blow up public finances.

This type of policy is a complex challenge, which seems more difficult because we have a sovereign who does not add the will of other parties, or experts, to make his ideas viable. Contrary to what he believes, this isolation hurts his project, one that will affect everyone but more severely those who are intended to benefit. If the pensions for the elderly become unmanageable, the 6 thousand pesos every two months will be confetti in a crisis like the one we experienced in 1995.

Explaining that it was fair, or necessary, to give these pensions is not enough. An argument of this nature only reassures the consciences of those who have given up seeing that every government has to be subjected to the same demands, whether it proposes “neoliberal” or “progressive” reforms. Many explicators fail because they privilege the lopezobradorista intention over their personal style of governing.

The problem is not even that we are facing an arrogant president, one who raises my electricity reform here, if they improve it in favor of the people, we will change it, if not, forget it. No. The president believes that only his ideas – which are motivations and purposes rather than reasoning – are acceptable. Good intentions could lead to serious problems before noble improvements. Explain that too.

It must be said that in the past we faced the same petulance: you cannot raise the minimum wage because it would be inflationary, we were told too many times. The fact that this government has proven that it was possible to pay more to the workers who earn the least and nothing bad happened, is not proof that in other things it is right.

Everything can be improved. And in him power was deposited like never before in four six-year terms (he was the president who once again enjoyed a majority in San Lázaro). But precisely if Mexico learned something when dealing with all-powerful leaders in the past, it was that it is the sum of different opinions and visions that can be less expensive, even if it is more cumbersome than just following the melatism of the sexennial tlatoani.

López Obrador has the popular mandate to carry out a radical change. The axes of this change were transparency, the rationality of the use of resources, the honesty of the officials and, of course, prioritizing the poor.

Yes, it was voted three years ago to shake up the INAI, to achieve a more effective transparency, which would reach the FGR and the Armed Forces. Did AMLO do it?

Yes, they voted for a review of the electoral system: goodbye to the exorbitant budget for parties. But what we had was the simulation and the trap of Mario Delgado, who promised in the campaign to return half of what was given to Morena to be used in the pandemic. Neither the party nor the president’s pinky met.

Yes, it was voted to combat discretion in the budgets given to the media. What has been seen is that they spend less but basically on their friendly press.

The lopezobradorista criticisms of the UNAM have no head or tail. The only possible interpretation is that – to the surprise of anyone who genuinely wants to explain it to them – it is an attempt, one more, to disqualify an entity with autonomy. It is not moved by the social agenda, nor by educational excellence.

In a democracy you do not have to give checks to the bearer, neither to the UNAM nor to any institution. University autonomy does not mean, in effect, that an institution of higher studies is unquestionable. But what are the credentials of this government to criticize the highest house of studies since all its questions have been evidenced as fallacious.

The interpreters of the Amlista gospel strive to disdain the context of the sayings, as well as the ineffectiveness of multiple presidential events. Presumably explorative questions are asked when your thesis is justifying in advance. They marvel at the political phenomenon that AMLO continues to be, but they deceive themselves by ignoring the multiple blunders of his government.

He has been in power for 3 years. It is — basically — to interpret their facts, not their sayings. If they do so, they will abandon the vaporous explanations of what the president wanted to say or intended to do; and perhaps from a genuine disappointment they will shed light on why it has failed, despite its good intention and legitimacy, to build as well as undermine.