This morning students from the University of Guadalajara (UdeG) met to march in favor of the autonomy of the institution and in demand of the 140 million pesos reallocated by the Government of Jalisco.

During the march, Javier Armenta, president of the Federation of University Students (FEU), pointed out to Eduardo Martínez Lomelí, secretary general of the Guadalajara City Council, of putting infiltrators into their demonstrations.

From 8:30 am the students began to gather in the esplanade of the UdeG rectory, on Avenida Juárez and Avenida Enrique Díaz de León, in Guadalajara. In what accumulated, they advanced until 9:45 hours to leave to complain to the Municipal Palace of Guadalajara; a total of 645 members of the university community gathered, according to data from the University Civil Protection.

The contingent’s route went all of Avenida Juárez to Calle Liceo, in the Historic Center. 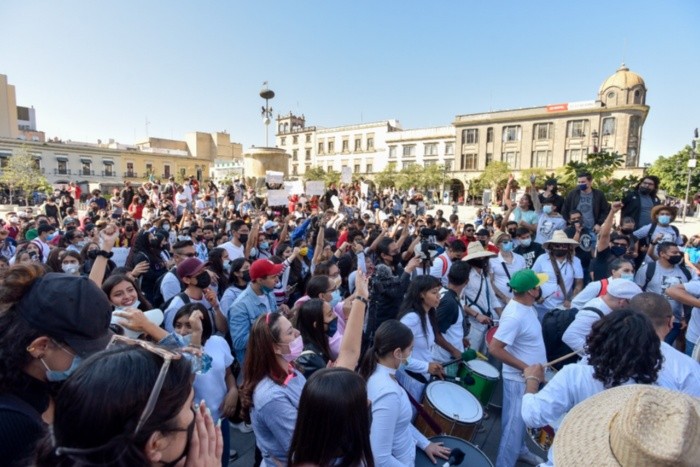 Already in the Plaza de Armas right in front of the Municipal Palace, Javier Armenta took the floor and said: “I was at the demonstration at Preparatory 8, and there was an infiltrator who provoked a teacher, trying to intimidate the students present. We are not going to allow it! ”, Commented the student leader.

In addition, Armenta said that the State government has tried to influence fear with the infiltrators.

“We are not going to allow it. – Who is behind this operation? – You have to give it a name and surname, and the first is Eduardo Lomelí (secretary general of the Guadalajara city council) ”, he said.

In addition, the young people asked the municipal president of Guadalajara, Pablo Lemus, for attention so that I observed all the actions of Martínez Lomelí.